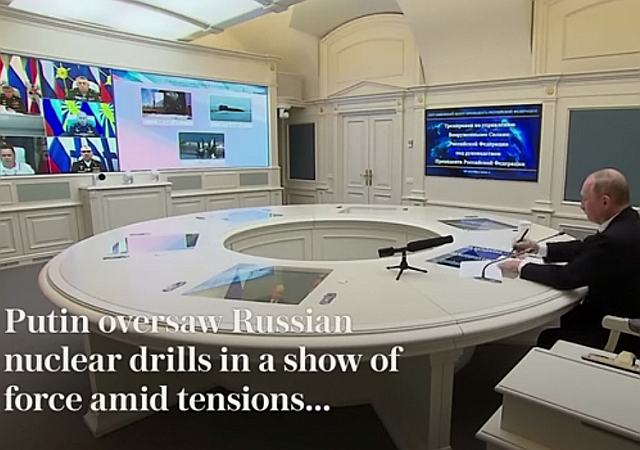 President Vladimir Putin is overseeing a nuclear strike drill as the Russian invasion of Ukraine enters its eighth month.

Media reports say that the maneuver involved test-firing missiles from the Kamchatka peninsula located in the Russian Far East and the Barents Sea near Norway. “Under the leadership of… Vladimir Putin, a training session was held with ground, sea and air strategic deterrence forces, during which practical launches of ballistic and cruise missiles took place,” the Kremlin confirmed in a statement published Wednesday.

The drills saw the test-firing of a Yars land-based intercontinental ballistic missile (ICBM), the launch of a Sineva ICBM by a Russian nuclear submarine and the Tu-95 strategic bombers set off cruise missiles at practice targets.

The US said it was notified Russia was planning to stage the routine drills and the country had complied with the terms of the nations’ last arms control agreement.

Military exercises involving land, sea and air components of the Russian nuclear triad have taken place on an annual basis to train the country’s nuclear forces and demonstrate their readiness.

The first Russian nuclear drill since the start of the war in Ukraine comes after President Putin threatened to use “all means we have” to protect Russian territory — days after declaring Ukraine’s annexed regions part of Russia. The Russian move coincides with a Ukrainian counteroffensive on multiple fronts that have so far managed to retake sizable territory.

Since late August, Ukrainian has reportedly liberated close to 1,000 square miles in the east and south of the country.

Russia, the second-largest nuclear power after the U.S., has close to 4500 functional warheads, most of which “are considered strategic nuclear weapons – ballistic missiles, or rockets, which can be targeted over long distances,” the BBC noted.

Russian Forces Again on the Offensive?

Almost a month after Moscow ordered a mobilization of military reservists, invading Russian forces appear to have halted the Ukrainian counteroffensive and seem to be on the offensive, Ukrainian President Volodymyr Zelenskyy’s statement on Wednesday suggests.

He claimed that the Ukrainian military is blocking the Russian advance in the eastern Donbas region. “Ukrainian troops are holding out on the eastern front,” the German state broadcaster DW News reported Wednesday night, citing the Ukrainian President’s statement.

Ukrainian President Volodymyr Zelenskyy said in an evening video address on Wednesday that Ukrainian forces had been holding out against Russian attacks, especially in parts of Donbas. “The situation on the front line hasn’t changed significantly,” he said.

“The fiercest battles are in the Donetsk region, towards [the cities of] Bakhmut and Avdiyivka”. He added that Russian forces have continuously attempted to capture the key city of Bakhmut, but to no avail.

“This is where the craziness of the Russian command is most evident. Day after day, for months, they are driving people to their deaths there, concentrating the highest level of artillery strikes,” the president said.

The admission from Kyiv comes as the Ukrainian military prepares an offensive to retake the Black Sea region of Kherson. “As Russia sends in reinforcements, some experts say, (Kherson) could be the most consequential battle of the war since Russia invaded Ukraine eight months ago,” the French TV channel Euronews reported Thursday.

We monitor Russian news [he has a Russian wife] and all their government reports and speeches, Russia has moved many of their missiles from the western side to the eastern side. That is a very long distance. All across Siberia. Guess where these missiles are now threatening? America, that’s right. Each missile has I think 6 to 8 separate warheads capable of hitting different locations. Our defenses can take out most but not all, which means if 25 percent make it through and say in all out war, they launch 10 to 15 missiles, that could be over 100 war heads with 25 hitting their targets. That’s 25 bombs 100x’s more powerful than what we dropped in Japan. Game over.
And Russian Missiles are supersonic and can reach our coastal states in about 15 minutes.

Biden has doomed us.

I remember Donald Trump saying that being friends with Russia was not a bad thing. But, the Military Industrial Congressional Complex decided it was.

We have beta males in charge and they are doing everything possible to show us how much they aren’t beta males.

This is also what democrats are after, a direct conflict with Russia to confirm their grip on power.

The reality that elections have consequences has never been more apparent.

You shouldn’t take the prospect of nuclear conflict lightly. Joe Biden probably has no idea where his nuclear codes are and he certainly wouldn’t be the one to make a “decision” without someone (or some group) behind the scenes making the real decision first. When you have only minutes to respond to incoming missles, our response is hours away.

Russia is going to use nuclear weapons in Ukraine, simply because they are doing so badly on the ground. They need to deter us from doing anything in response. Of course, Biden is so brain-dead, I’m not sure he or his handlers can be deterred.

US National Security Advisor says, “We have communicated directly, privately and at very high levels to the Kremlin that any use of nuclear weapons will be met with catastrophic consequences for Russia.”

US would would use overwhelming force against Russia. US woud attack and sink Russian fleet in Black Sea, etc. etc.

And after US escalates to full scale war, we would whip their butt with conventional weapons and Russia would do nothing. Absolutely nothing. They would just go home and save their Nuclear Arsenal for a rainy day..

They probably want to see if their nuclear bombs really go boom.

If it involves logistics and it’s around Ukraine, it’s not going to work for the Russians.

Obama owes Mitt an apology, or is the detonation going to be just before the midterms, televised for all to see?

Fighting has been raging in Ukraine for weeks.

What has changed is we deployed the Screaming Eagles (elite unites trained to cause a maximum of trouble behind the lines) to Europe telling them they will be doing something about Russia.

Leaving out our side of escalation is propaganda, we threaten to join the war of course Russia reminds us that would mean the end of both of our nations.

Remind me again. Was Oceania always at war with Eurasia?

Hello, comrade deserter. Tikivich at your service. The Red Terror was always a silly fiction promoted by McCarthites, kulaks and saboteurs. Gulag? More like HappyLag! Another fiction dreamed up by Slave Trading Imperialist Proxy-warmongers!