Regional leaders are bracing themselves for even more launches from North Korea. 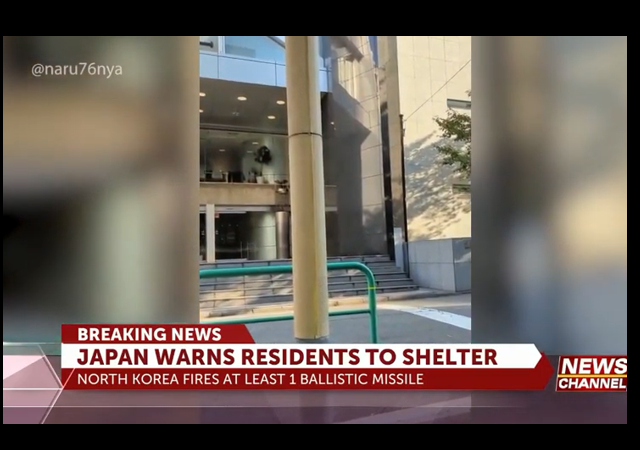 North Korea fired a ballistic missile over Japan for the first time in five years, which led to air raid sirens blaring in two northern prefectures.

The launch represented a major escalation by North Korea, which has conducted a flurry of missile tests in recent days as the United States held military drills in the region with South Korea and Japan.

The medium-range missile was fired from Mupyong-ri, near North Korea’s central border with China, according to the South Korean military. It was launched at 7:22 a.m. and landed in the Pacific Ocean 22 minutes later, Japan’s chief cabinet minister, Hirokazu Matsuno, said. It crashed outside Japan’s exclusive economic zone, which extends 200 nautical miles from its shores, and flew about 4,600 kilometers, or 2,850 miles.

Japanese authorities issued a “J-alert” to residents in northeaster regions to evacuate to buildings nearby, the first such alert since 2017. Trains were temporarily suspended in Japan’s Hokkaido and Aomori regions before their operations were resumed after a government notice that the North Korean missile appeared to have landed into the Pacific.

Japanese Prime Minister Fumio Kishida told reporters that “the firing, which followed a recent series of launches by North Korea, is a reckless act and I strongly condemn it.” He said he will a National Security Council to discuss the situation.

Regional leaders are bracing themselves for even more launches from North Korea.

“Pyongyang is still in the middle of a provocation and testing cycle and is likely waiting until after China’s mid-October Communist Party Congress to conduct an even more significant test,” said Leif-Eric Easley, associate professor of international studies at Ewha Womans University in Seoul.

“The Kim regime is developing weapons such as tactical nuclear warheads and submarine-launched ballistic missiles as part of a long-term strategy to outrun South Korea in an arms race and drive wedges among US allies.”

Jeffrey Lewis, director of the East Asia Nonproliferation Program at the Middlebury Institute, said a nuclear test could even be on the cards. “North Korea is going to keep conducting missile tests until the current round of modernization is done. I don’t think a nuclear explosion is far behind,” he told CNN.

Japan isn’t part of the US-NorKo alliance. Looks Kamala can expect to be sent on another Asian junket.

Something else that would not have happened if Trump were President.

Let’s hope the State Deparment is combing all the official communications on this matter to ensure proper usage of pronouns and language.

Strongly condemning the missile tests will have no effect.

Maybe they should start shooting them down.

To the contrary, let Fat Boy shoot off … his missiles. All of them. Keep testing, Your Enormity, we’ll watch and snicker.

The reason, of course, is that Mr. 3XL doesn’t have the economy to turn out but so many missiles. So let the Corpulent One shoot them off in a futile attempt to intimidate. We’re not impressed.

At some point Pudgy will figure this out (before he dies of heart disease and diabetes) and the tests will stop. But, I hope, not soon.

The great leap forward for NORK missile technology came when they liberated missile engines from a Ukrainian boneyard. Just FYI.

The libs want us in a war. They want him to keep shooting missiles. Why do you think the Woke want everyone else out. So there is nobody to stop them. Remember the elites want to reduce the worlds population, so how do you think they are going to do that.

This explanation is the best one I have read so far that explains all the stupid choices being made by elite political leaders everywhere.

They want to increase the population of the United States by bringing in millions of immigrants from other countries. The countries they came from will have still more children to fill the void left by the departing people. The population of those countries will not decrease, but rather increase.

At the same time the immigrants coming here will have twice as many children as the average American family.

We would have 63 million more Americans if they hadn’t been aborted.

I am of two minds on abortion.

First and foremost, I see it as the murder of the most innocent lives, and it should be completely outlawed and eliminated.

On the other hand, the majority of those seeking abortions being Democrats, maybe we are better off if they aren’t reproducing . . .

They are not immigrants! They are invaders and need to be rounded up and sent back to Mexico! Build the damn wall as President Trump envisioned and close the border until the wall is complete!

I have all ideas there is a Boomer out there close by fully prepared to wipe NK off the map if needed.

Those little Japanese JAL pilots should don rising sun sweatbands, down some saki, and fly their jumbo jets over to Pyongyang.

I doubt the timing of Harris demonstrating this administration’s total incompetence and Kim acting out is even remotely coincidental.

Japan needs to make corrections to its laws to allow Japan to become a Country that can and will defend itself and the ability to initiate offensive power to protect its Country and citizens from all enemies!

Long, long ago when the world was new I started writing as a sideline for both fun and profit. You write what you know about and enjoy. As it happened, I started writing for professional military journals a couple of score years ago.

While my writing has gone several directions, I still have a certain expertise in the field.

1) Japan has for decades had the technology base, and materials, to produce nuclear weapons. Actually the designs for such are pretty much open source and have been for a long time.

2) For those in the field, the working assumption has long been that the only thing holding them back from doing so has been their own choices. Those choices in turn are largely influenced by the trauma of the WW-II generation and the one immediately following [both of which are dying out] and a belief that they can depend on the United States to defend them from nuclear attack. Look at the current regime here, and tell me as a foreigner that you would depend on them in a life or death crisis.

It is assumed by most in the field that Japan can have nuclear weapons operational upon the decision to do so, almost like turning a key.

3) They HAVE the means of delivery. I will not go into the details, but if you can launch a satellite of a certain mass, into a selected orbit with a certain minimum apogee; you have a functional countervalue ICBM. As you refine the precision of the guidance, you get into the realm of counterforce ICBM’s capable of taking out hardened targets. Since the 1970’s Japan has been launching satellites that indicate a countervalue capability, In 2003 Japan launched the Hayabusa probe that went to the asteroid belt, landed on an asteroid, gathered samples, and returned them to earth. THAT is bloody-well precision, with all that implies. If Japan decides that we cannot be depended upon anymore and it is in their own best interest, she can have her own nuclear deterrent. I would note that even in just east Asia there are other countries who it is believed could become formally nuclear capable at a moment’s notice, too.

4) It is rumored that I am not a nice person. Speaking for myself, an interesting option for Japan after this last Nork missile launch would be to clandestinely “turn that key” if they have not done so already. And at the next launch by Kamala Harris’ allies; to launch their own missile with a nuclear warhead on it. If the Nork missile lands in Japanese territory, then the Japanese missile can land in North Korea. If it goes over Japanese territory again to open sea, then the Japanese can tell the world to watch. And then launch at an empty area of the Pacific at an appropriate range, detonating. And then tell the world [which would include North Korea] that anyone launching a missile into or over Japanese territory will be subject to retaliation at Japan’s discretion. The diplomats [whose world would suddenly be a lot more complex] and the environmentalists will scream like ruptured Bann Sidh. But the point would be made.

Thank you for taking the time to write that. It’s greatly appreciated.

Let’s add that Japan has more than one delivery vehicle available, with more in the development pipeline, depending, as with building actual nukes, mainly on the will to do so.

Recall the successful exercises integrating the STOL version F-35 with Japanese “destroyers” that look a lot more like small-deck assault carriers. And the Japanese operate some number of F-35s.