Rep Jim Himes: “…we..at some point the United States is going to need to collectively decide that not only are we going to oppose Russians and Chinese and North Koreans and Iranians messing around with our elections we’re not going to allow the Republican Party to do it either.” 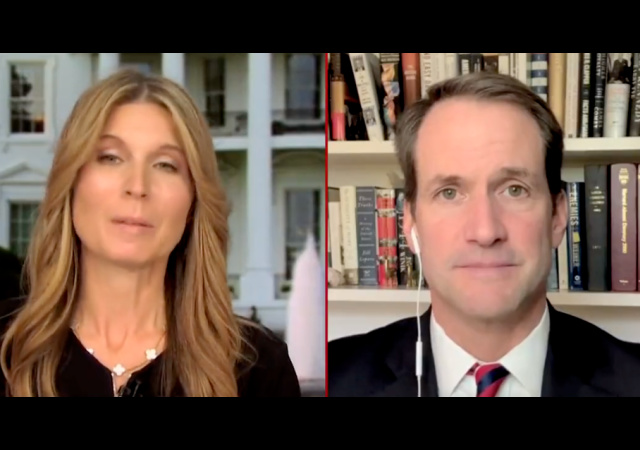 Remember, when the Democrats lose, it’s because of cheating and intimidation by the Republican Party and their dictator friends.

MSNBC’s Nicole Wallace spread the lie about all kinds of threats surrounding the 2020 election, including violence. She used the lie to suggest that we need to have our “friends and allies” to monitor the election.

Rep. Jim Himes (D-CT), Wallace’s guest, made it sound like Republicans and crazy people with their non-existent assault weapons are intimidating Democrats at election boxes across the country.

I found one case where people complained about two people in Arizona.

But Himes used the opportunity to group the Republican Party with Russia, China, North Korea, and Iran.

MSNBC's Nicolle Wallace: "The threats to our elections in two-and-a-half weeks are so pervasive and so dire — they include violence — do you think it’s time to ask for friends and allies to come over and help us monitor our elections?" pic.twitter.com/kDAzqSHR8F

Nicole Wallace: If you read through the papers this weekend the threats to our elections in two-and-a-half weeks are so pervasive and they’re so dire, they include violence — do you think it’s time to ask for friends and allies to come over and help us monitor our elections? We used to do that in other burgeoning and threatening democracies.

Rep. Jim Himes (D-CT): Yeah Nicole I’m not there yet and I know why you’re asking what you’re asking and you’re not wrong. Right? I mean, you know, the kind of intimidation that is threatened around polling places. I mean, you’ve seen the pictures of the guys with assault weapons by the boxes. That stuff is intimidating. And again, that used to be the problem of, I hate to use the term, but third world countries that didn’t care about democracy. Um, But uh, no. Look, this is something for us to work out ourselves, and um, you know, we..at some point the United States is going to need to collectively decide that not only are we going to oppose Russians and Chinese and North Koreans and Iranians messing around with our elections we’re not going to allow the Republican Party to do it either. One of the most effective things we can do to take an awful lot of the vulnerabilities off the table, of course, would be to pass the Electoral Count Act in the United States Congress ’cause that deals with a lot of the levers they tried to use after Donald Trump was defeated in November 2020.

“…we’re not going to allow the Republican Party to [mess with our elections} either.”

But it’s okay for the Democratic Party to jigger the elections, is that what you’re saying there, Sparky?

“If they [those stuffing the ballot boxes] are not doing anything wrong, they have nothing to worry about.”
Isn’t that the mantra?
Well, back atcha, tyrants.

Hey, Nicole — how many of these “threatened victims” were beaten up, bloodied, and told that Democrats weren’t welcome in that part of town?

She’s disgusting. What could corrupt someone like this – oh, excuse me: money, narcissitic glamour.

She and her ilk have done grave damage to our world.

Someone should glue their hand to her face in protest.

I may be getting old, but does anyone remember the New Black Panthers case?

They were on film violently threatening people in line to vote.

The perpetrators were just waiting for sentencing when orders came down from the Obama DoJ to dismiss the charges.

That was in Philly, if memory serves. Nothing happened to them.

What happened to the sequel (New Black Panthers II)?

Dems had no issue with voter intimidation & threats of violence when perpetrated on their behalf.

Even living next door, I find the Reps and Senators that CT chooses to send to DC and the slimiest, most KoolAid serving pack of weasels I have yet to see.

From the “Safest most secure election in history’ to the UN should count votes in Pennsylvania in just a year and a half.

How about we just enforce the election laws instead? It ain’t complicated. Any adult capable of independent life in our society can easily comply.

Ban mail-in voting except for those that have a good reason. Infirm, deployed, etc. That’s how it works in pretty much every other western country.

We had that all along: absentee ballots.

But the soft bigotry (read it: racism) of the low expectations of the left demands that they believe that blacks are not capable of having positive ID, credit cards, or know their way to the ballot box.

International monitors sounds like a good idea to me; there are some Dem-run counties where the election practices would put a banana republic to shame.

We can bring Jimmy Carter out to oversee the monitors.

Why stop with elections?

Because the blue helmets are soooo good at keeping elections free and fair and such.
/eyeroll/

Blue helmets are “peace keepers”, not election monitors. Election monitors are usually from countries such as this one, that know how to do elections right. And I wouldn’t mind seeing some of them get a first-hand look at how things are done in Philadelphia Country, or Cook, Dane, King, and some other notorious counties that are run entirely by a Dem machine with no scrutiny from anyone.

These people aren’t serious. The last thing Dems want is outside monitors they can’t control. This is just a setup for when Republicans object, Dems can say “They’re covering up their election fraud.”

Republicans should call their bluff and suggest that each side gets to place international monitors in ten or twelve districts of their own choosing. Dems would backtrack with alacrity.

My conundrum….vote early, as I usually do, which means the cheaters know how many fraud ballots they need to steal the election. Or, vote the day of the election and find someone has already voted with my name.

Nicole Wallace is mentally broke. Trump broke her. Trump is the only thing she can think about.

Acording to AOC, she’s so obsessed, because Trump won’t take her to bed.

So, you can question an election if you are questioning:

One of these is not like the others, but the Dems seem to treat them all like a hostile foreign power that is not allowed to monitor and participate in the conversation about the fidelity of our elections. So, who’s in the wrong here??

It’s basically the Reconstruction era post-Civil war where one side is not allowed to participate in the government at all according to the other side.

Dems are behaving like they have conquered half of the country.

They believe they have. When they speak of “protecting democracy”, what they really mean is “protecting Democrat control”. They equate “democracy” with “Democrat rule.” Republicans are “un-democratic” in their book, so it makes perfect sense to them.

The best real estate score Trump ever made was occupying the empty space between Nicole Wallace’s ears.

Republicans are not doing the violence

Like Ivory soap, the Democrat socialist party is 99 44/100% pure violence.