Michigan Gov. Whitmer Lies About Closing Schools for Only Three Months Over COVID

Michigan Gov. Whitmer Lies About Closing Schools for Only Three Months Over COVID

Canceled the school year in March 2020. Then she closed schools again in November and December in 2020 and January 2021. 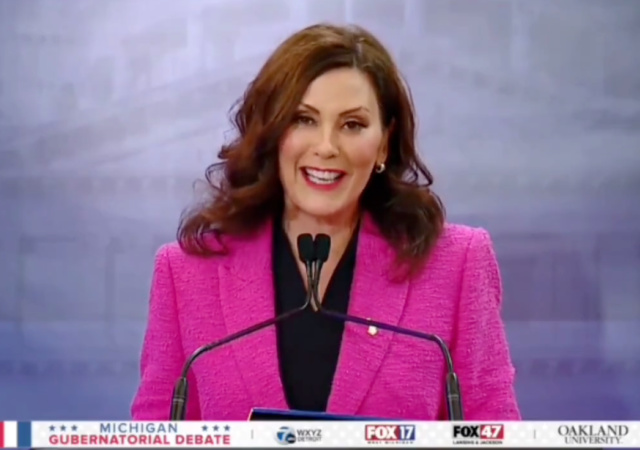 During Tuesday’s debate, Michigan Gov. Gretchen Whitmer bragged that she only kept schools closed for three months during the COVID pandemic.

Gretchen Whitmer: "Mrs. Dixon says I kept students out longer than any other state .. kids were out for 3 months." pic.twitter.com/mSx1Z4P8kL

It’s weird to brag about a complete lie. No stretching of the truth. It’s 100% a lie.

Gov. Gretchen Whitmer’s administration extended on Monday the closure of some Michigan businesses, the halt on indoor dining at restaurants and the suspension of in-person instruction at high schools through Dec. 20 as COVID-19 surges on.

The Democratic governor announced the 12-day extension during a Monday afternoon press briefing, drawing criticism from Republican lawmakers and business groups that wanted the most intrusive of the current restrictions lifted. The initial three-week “Pause to Save Lives” order was originally set to end at 11:59 p.m. Tuesday.

The expiration date is now 11:59 p.m. Dec. 20, five days before Christmas. But Whitmer is already discouraging people from gathering for the holiday.

So that’s what? Seven months total?

Gretchen Whitmer is so out of touch with what she did to our students, she thought they were locked out for only 3 months. Some were out of the classroom as late as this year and she did nothing. In just 14 days, we can begin to right her wrongs. #VoteDixon pic.twitter.com/h4gUJ5173I

This isn’t the 1960s when a liberal could lie and the big three would cover up the facts. The truth in fact is out there all you need to do is find it.

Yeah, but good luck finding it. Big Tech is carrying their water now.

The truth is out there, but it would be harder to find where she ever told the truth than when she lied.

Huh? They still gladly cover up the facts, they just can’t (yet) keep the facts from coming to light anymore.

Whitmer is many things but a Jedi she ain’t; ‘these are not the school closures you are looking for’. I would be willing to bet that parents and students know exactly how long they were not in a school building because in person classes were prohibited by Whitmer.

But the Democrats never try to gaslight us.
That 18-24 month shutdown you think you remember was merely 15 days to flatten the curve.

Absolutely! Don’t forget that the mean old vax was Trump’s thing either. /S

The d/prog twisting in the wind due to the better late than never backlash to their Rona mania is really making them upset. They had a good run with mandates, school closures, driving small businesses into closing down. Don’t forget the several times the federal government got to vote to send out more Rona Relief $.

The Covidians aka d/prog went full Leroy Jenkins and everyone has the receipts. They can and will try to avoid blame but I don’t see that being successful.

Let’s just clearly state the record, sarcasm or no sarcasm.

The vaccine was wholly Trump’s thing in pushing it forward quickly and expediently.

The ridiculously totalitarian and unconstitutional mandates to force people into taking it was wholly a Democrat thing.

The woman from planned parent/hood, and the namesake of Whitmer-entrapment infamy.

Engaging in brazen mendacity is reflexive and instinctive to Dumb-o-crat fabulists. If the facts don’t help your political self-interest and/or undermine your contrived narrative, just engage in brazen prevarications.

How can you tell if a democrat candidate is lying?