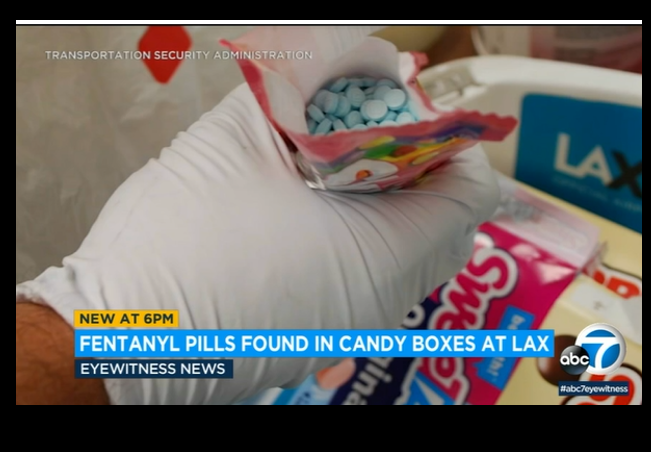 I don’t know about you, but I do not recall a time before this year that I was worried about Halloween candy being spiked with opioids.

But this is the Biden era, and thanks to open borders and the China-Mexico drug circuit, this has now become a reasonable worry for many parents as a massive haul of fentanyl hidden in candy wrappers was uncovered at LAX.

Someone tried to get through security at Los Angeles International Airport with bags of candy that contained some 12,000 pills of fentanyl early Wednesday morning. The opioid pills were contained inside packages of Skittles, Whoppers and SweeTarts candy.

The drugs were seized by the Los Angeles County Sheriff’s Department and federal Drug Enforcement Agency agents assigned to a task force at the airport.

The suspect managed to flee but has been identified.

The large bust prompted law enforcement to encourage parents to be cautious this Halloween about the candy their children bring home. There have been multiple reports this year of fentanyl manufactured in rainbow colors or disguised in wrappers.

“With Halloween approaching, parents need to make sure they are checking their kids candy and not allowing them to eat anything until it has been inspected by them,” the Sheriff’s Department said.”If you find anything in candy boxes that you believe might be narcotics, do not touch it and immediately notify your local law enforcement agency.”

Of course, given the TSA’s competence, it is shocking that the suspect got away.

I can't bring too much toothpaste on a plane but the guy with a life sentence worth of drugs evaded all authorities in an airport?

It’s developments like this that has led grieving mother from Oregon to begin plans to sue the Biden administration over its failure to secure the southern border, directly resulting in a surge of fentanyl.

Her son, Alex Garcia, died from a fentanyl overdose.

Tami Garcia, 38, and other parents from Medford, a city in the state’s southwest, have lost children to fentanyl, a powerful and deadly opioid, in recent months and are readying a class action lawsuit to push for tougher action against traffickers.

Alex, an avid American football fan and player, died from a suspected fentanyl overdose on August 26 — apparently taking the pills under an assurance they did not contain the synthetic opioid, which is 50-100 times stronger than morphine.

The case raises troubling questions about the growing acceptance of drugs in states like Oregon, the police’s difficulty in cracking down on such a massive problem, and the seeming ease by which traffickers smuggle drugs across the US-Mexico border.

…Garcia said she was discussing her options for a suit with lawyers and other bereaved parents. Meanwhile, she has launched the website Alex’s Story to raise money and awareness to fight the fentanyl scourge.

How much walked right over the open border?

“for tougher action against traffickers.”

How about a field test, those caught should be forced to ingest 5 pills. If it is candy, no problem, if it is fentanyl they are no longer a problem.

Credit where credit is due. Or discredit, in this case.

Razor blades in apples and needles in Snickers Bars are out.

They were never in. There has never been a documented case of that happening. It’s all been scare stories. Even the fentanyl in rainbow colors gave rise to a false alarm — there was never any reason to suppose that these were going to be given to children. But hiding the stuff in candy wrappers is just asking for an accident to happen. Obviously nobody is going to deliberately give expensive drugs to trick-or-treaters, but someone who is in a house where these “candy” packages are found, but doesn’t know about what’s really in them, might innocently give them away.

This incident is a nothingburger.

It’s not as if the drugs were found in candy wrappers in the candy aisles of one of the airport shops. Now that would have been cause for concern.

The guy was a mule, smuggling drugs from one state to another, and hid them in candy wrappers in his own luggage. He could have used shaving cream cans, or Maltese Falcons, but he chose candy wrappers. It’s not like he was taking them somewhere in order to hand them out for free at Halloween.

Yes, but that’s not the concern. The problem is that if the drugs are being brought over the border in candy wrappers, are they going to be taken out once they get to where they’re going? Or will they be left in there because that’s easier? And if so, then accidents are going to happen. Someone in the drug dealer’s house, or in the house of someone who bought it, and who doesn’t know that that candy box is not really candy will give it to some kid, with the best of intentions.

Guidance to illegals crossing the border from ACLU website:

So if you are a homeless person living on the streets you should:

2. Then ride the bus to Mexico and join a caravan of illegals heading to the US border.

3. When you get to the border, tell them you are illegal and you will be treated better than any US citizen (food, shelter, smart phone, and free transortation to a city where you will be staying in a nice hotel instead of living on the street).

I am 26 years past my employment doing stops and searches and arrests, but the LE can search them. “Search in the course of a lawful arrest” can be done without warrant or consent. If the illegal crossers are arrested, a search is lawful. If they can be physically separated from their “luggage” then a warrant mould most likely be needed before searching that. The ACLU should stick with civil rights stuff…..

Huh? The border exception to the fourth amendment doesn’t just apply at legal crossings. It applies to anyone crossing the border, anywhere along it, and even to people who are only suspected of having crossed the border.

AOC wants to fight back by shaping candy to look like fentanyl pills.

Another example of Biden’s crimes against humanity, inflicted on Americans by a cruel human being.

This would be a good time to remind everyone that nobody is giving out their drugs for free to neighborhood kids.

You mean just because they paid a lot of money to buy the drugs and won’t get that money back if they give it away to neighborhood kids? And they would have to give up the profits they would make if they were to actually resell the drugs? And they just might not want to spark a wave of public outrage that might actually force the government to pretend to take action? Nah.

Of course not. But if the drugs are in candy wrappers, someone with access to them might not know what they are, and might give them away inadvertently.

I doubt these droogs are Married with Children.
If they have anybody else living with them, it’s likely just another incel.

Sure, and I bet they accidentally put their weed into the crock pot with the corned beef instead of cabbage. Maybe they put a cup of cocaine in the corn bread instead of flour.

These are drug smugglers, not housewives who just happen to have a giant stash of fentanyl and an unorthodox storage system.

They have other people in their homes, who are not necessarily aware of all their activities. And they sell the drugs: who’s to say they won’t sell them still in the candy packaging, just because that’s easier than repackaging them? The customers who buy them will have others living in their households with access to them, and those people may end up giving them to children, completely by accident.

Let’s see-which is more probable? A massive effort by drugs man lose to poison Halloween candy with drugs that they smuggled in at massive risk, will net them zero dollars if put into Halloween candy, and which they could otherwise sell for massive amounts of money?

Or just maybe they were looking for a way to smoothly drugs in some form that would not attract notice.

If you are a law enforcement official, or someone who thanks the parents should be arrested and lose custody of their kids for letting 10 year-old children play by themselves in a public playground, you will almost certainly go with the first possibility. After all, why would narcotics sellers want to get back their investment, much less make a profit, when instead they could take a massive financial loss and spark a wave of public outrage by poisoning kids with drugs for no reason.

But for anyone with the slightest knowledge of economics or criminal behavior, gosh, which one might be?

While I agree a true drug dealer wouldn’t poison kids on purpose, consider the other possibilities:

1) Fentanyl “candy” gets accidentally mistaken for real candy by someone else in the household. Many instances of children eating THC ingestibles and/or taking them to school. Such an incident happened in Maryland recently. Or an innocent adult in the home grabs a handy bag of “candy” when the door bell rings. Drug dealers are not known for maintaining neat and orderly households.

Put them in front of Stacey Abrams: she’ll eat them all.

And it still probably wouldn’t do anything to her.