RIP to a powerhouse in the political world. 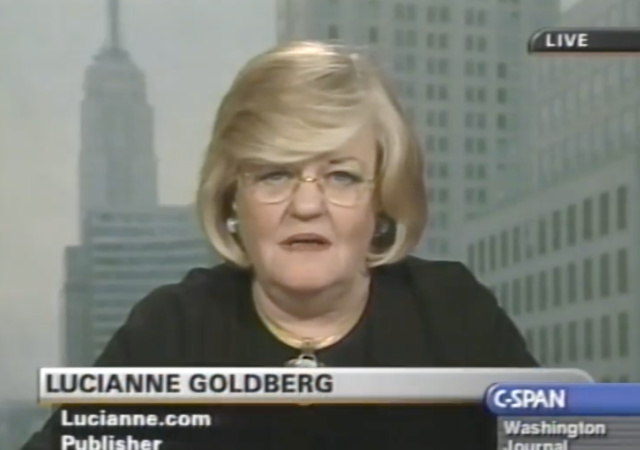 Lucianne Goldberg, a key player in Bill Clinton’s impeachment and powerful literary agent, passed away at 87.

Commentator and author Jonah Goldberg is her son.

We are heartbroken. Our beloved Lucianne passed away peacefully and surrounded by loved ones in her own home, the way she wanted. But she has left a whole in our lives that we can never fill completely.

Lucianne was a loving wife, mother, and grandmother. She was also a patriot who expressed her love of this country with both political fierceness and penetrating wit.

In that part of her world this site became her home, her community, and her voice. She also wanted Lucianne.com to endure and she made arrangements that it would do so – just as it has for the past 25 years. The same loyal staff, the same policies, and the same principles. ( And before you ask, her son Jonah will not be involved.

She loved her son without reservation, but they saw politics differently from time to time. So, we’ve worked it out.
The Lucianne.com team will stay on and Jonah will stay out of it.)

Obviously, no one can replace Lucianne. But we can carry-on in
her name. We’re not asking you to send money or make donations to anything. We’re just asking you to stick around. We think that’s the best way to honor and keep her memory alive.

Ryan Murphy made a film about Clinton’s impeachment with Margo Martindale portraying Goldberg.

Lucianne Goldberg, a friend of Linda Tripp, the former White House aide who did the taping, also helped bring the Lewinsky allegations to Newsweek magazine, according to a source with firsthand knowledge of the meeting.

Goldberg, 62, makes no secret of her anti-Clinton animus. “What I’m glad about is he’s getting caught,” she said of Clinton yesterday. “At something. If it took this to get him, fine.” She said she had been “furious” at newspaper coverage of Clinton for the last five years because journalists did not do enough about Whitewater, “Hillary’s phony stock deal” and other allegations of corruption.

If the president’s lawyer had attacked her credibility the way he had Tripp’s, Goldberg said, “I’d be on the lawn of the White House with a deer rifle.” She added: “I’m a hero if this thing comes out the way my, quote, agenda would like to see it come out.”

This clip is from 1998. My goodness. “Electronic mail.” The growing use of cellular phones!

Condolences on your loss, your mom was always very kind to me and I appreciated that.

When this story hits over at Citizen Free Press, half of the comments will blame The Jab.