PA’s Disciplinary Board appealed to Third Circuit after district court enjoined Rule 8.4(g) as an unconstitutional encroachment on free speech. 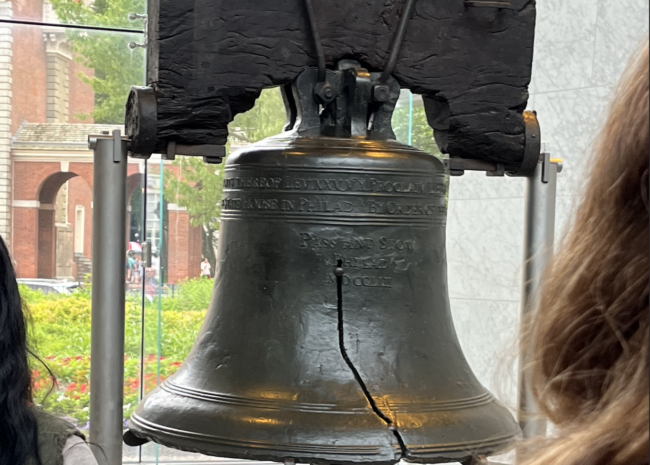 A case now before the Third Circuit Court of Appeals tests the legality of recent state efforts to police lawyers’ speech. In the guise of adopting a new Rule of Professional Conduct banning attorneys from “discrimination” and “harassment”, Pennsylvania is trying to make attorneys toe the line of left-wing political verities. LIF has lent its support by filing an amicus brief supporting a lawyer who challenged the new rule, and who won in district court.

Here at LIF, we’ve reported unceasingly about speech suppression under the pretext that the speech is offensive. Speech that challenges political assumptions is regularly branded discriminatory or harassing. Should the Third Circuit resurrect the now-enjoined professional conduct rule, it would provide a vehicle for castigating any attorney who dares express an unpopular view.

Imagine an attorney is in his office next week discussing the college discrimination cases due to be argued before the Supreme Court on October 31, 2022 (Students for Fair Admissions v. Harvard and Students for Fair Admissions v. University of North Carolina). Suppose the lawyer speaks approvingly of petitioner SFFA’s claims, suggesting that racially discriminatory admissions policies violate the Constitutional guarantee of equal protection of the laws. Suppose further that someone overhearing the conversation is offended by the lawyer’s position, and files a discrimination complaint with the Disciplinary Board.

Sound crazy? Maybe. But, it’s no crazier than what happened to former Princeton professor Joshua Katz, who was fired from his tenured position on manufactured grounds after daring to oppose maximalist reverse-discrimination demands.

It’s no crazier than the University of Pennsylvania trying to sanction law professor Amy Wax for daring to advocate self-help. Wax has recommended a return to bourgeois values like getting married before having children, getting a job, working hard, and being charitable and civic-minded, as a cure for many current social pathologies. In a 2017 op-ed she co-authored, Wax suggested that “The loss of bourgeois habits seriously impeded the progress of disadvantaged groups.” For stating such “obvious truths,” the dean of Penn’s law school is seeking to impose “major sanction” against her.

Given this background, it’s more likely that our imaginary attorney won’t express any opinion about a pending Supreme Court case or anything else remotely related to matters like racial and gender relations. Knowing the awful consequences of running afoul of current ideological fashions – public condemnation for being a “racist”, losing his job, closure of his social media accounts, and so on – he’ll learn to keep his mouth shut. His “right” to free speech will be a hollow shell.

Of course, our intimidated attorney wouldn’t even dream of representing people like the SFFA plaintiffs, or Josh Katz, or Amy Wax. That’s much too dangerous, too likely to boomerang on a lawyer representing such unpopular people. Nowadays, even lawyers who win Supreme Court cases are forced out of their firms, if they represent the politically incorrect side.

That’s why Pennsylvania’s Rule of Professional Conduct 8.4(g), and similar rules (based on the American Bar Association’s Model Rule of the same number) are so dangerous. They not only risk chilling attorneys’ speech; they risk chilling the legal claims of victims persecuted by the new McCarthyism, whom lawyers will be too intimidated to represent. 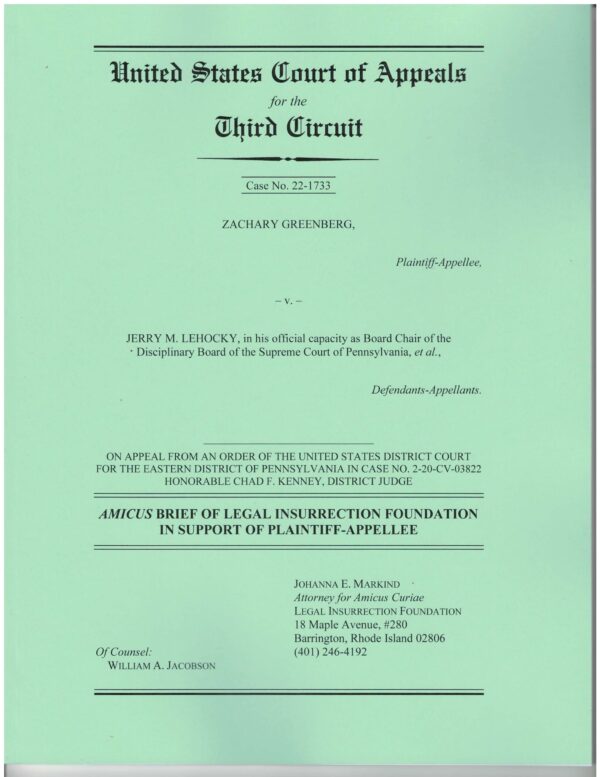 For all of these reasons, Legal Insurrection Foundation filed an amicus brief supporting the plaintiff-appellee, Zachary Greenberg. Greenberg successfully challenged the rule below. Not once, but twice (the rule was revised after the first opinion), the district court held that the rule was unconstitutional.

Here’s how we summarized our argument:

In 2022, speech is regularly policed and debate shut down, often in the name of preventing “discrimination” or “harassment”. The problem of policing speech is growing, not shrinking. Most importantly for the Court, Pennsylvania and other states recently imposed speech codes on lawyers. Pennsylvania Rule of Professional Conduct 8.4(g) is a speech code by another name. The rule is constitutionally infirm as both overbroad and vague. Like other such codes, it can reasonably be expected to chill speech touching upon anything remotely concerned with race, race relations, “gender” relations, and how the Equal Protection Clause impacts race and gender relations. These are important subjects of public debate, and as such, core protected speech.

Although speech codes are new to attorney regulation, they have been around for a while, especially in the form of campus speech codes. College professors have been persecuted and fired, and students have been harassed. Surveys and anecdotes from the college campus support Plaintiff-Appellee’s position that speech codes chill speech and are enforced arbitrarily. That’s the danger, and that’s why this Honorable Court needs to nip it in the bud by upholding the district court’s judgment in this facial challenge.

The entire brief is available here.

The other amicus briefs filed in support of plaintiff-appellee Greenberg are available here. Additional documents pertinent to the case, including Greenberg’s complaint and the judge’s March 24, 2022 opinion granting summary judgment for the plaintiff, are also available from there.

Eugene Volokh filed an amicus brief for the Women’s Liberation Front and Concerned Women for America, which offered specific examples of principled disagreement about transgender pronoun and athletic classification that were branded as hate speech and/or a violation of Rule 8.4. Another amicus brief was filed on behalf of two legal ethics professors, Bruce A. Green and Rebecca Roiphe, who have written about Rule 8.4. (LIF cited a law review article they wrote in its brief.) Ilya Shapiro – who was himself previously condemned for sharing his views on reverse discrimination – filed an amicus brief on behalf of Manhattan Institute offering a very scholarly analysis of First Amendment law.

By the way, lawyers aren’t the only new targets. Having all but shut down free speech and open debate in college and on social media, progressive ideologues and power-hungry bureaucrats are also trying to police doctors’ speech. If not stopped, they’ll be coming soon to a theater near you.

First they came for the college students and professors, and I did not speak out—because I was not a student or a professor.

Then they came for the doctors, and I did not speak out—because I was not a doctor.

Then they came for the lawyers, and I did not speak out—because I was not a lawyer.

Then they came for me—and there was no one left to speak for me.

Excellent work by the Legal Insurrection Foundation! Keep it up!!!

“If not stopped, they’ll be coming soon to a theater near you.”

So true. thank you for your fight. I hate tyrants. Not a strong dislike. It’s a hate. When they control speech, they will then control thought and action. We cannot let them take us down that road.

Commendable work — as usual — by the LI team, standing up to the Dumb-o-crats’ obnoxious and brazen totalitarian stunts.

What’s dismaying is that the country has reached the point where such issues need to be litigated, in the first place. Seems there once was a time, long ago, when the Dumbs actually went to bat for free speech.

Thank you Insurrection Foundation
Thisstate is slipping faster and faster into a Leftist stronghold. We don’t win the election it will continue.

Core issue is people’s feelings getting hurt by something they heard.

Attention Crybullies: My right of Free Speech is codified in the U. S. Constitution. Your ‘right’ to not be offended doesn’t exist.

When this struggle is over and assuming we prevail, civilization will have been preserved because at the end, someone presented the case to a court and set things straight. It took the Nuremburg trials to settle cap off the WWII struggle for freedom. The defeat of the WEF “Fourth Reich” will only be secured when we follow up the political victory with another international investigation and trial. And there will be a great many enemies to put on trial for crimes against civilization.