“was accompanied by Penn President Liz Magill and his granddaughter, Natalie Biden, who was reportedly visiting the University” 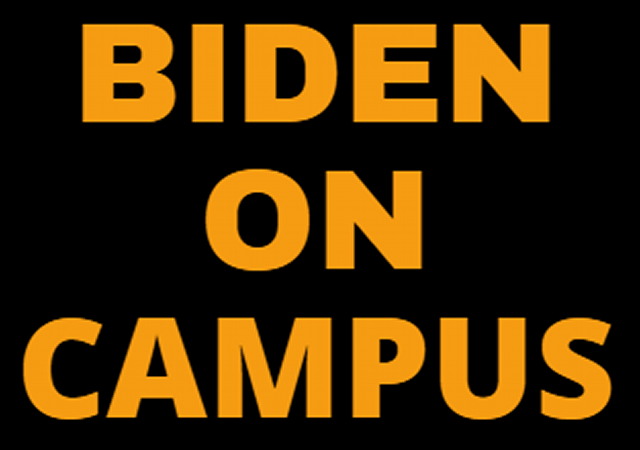 Notice that conservative students didn’t lose their minds and mount a protest mob. A Republican president could never do this because the campus left would cause a scene.

Biden arrived around 3:45 p.m. at the University Meeting and Guest House, located at 3808 Walnut Street, before exiting around 5:25 p.m. and walking down Walnut Street to the Penn Bookstore, stopping to greet the crowd of students and Philadelphia residents who had gathered along the way. Biden, former Benjamin Franklin Presidential Practice Professor and founder of the Penn Biden Center, was accompanied by Penn President Liz Magill and his granddaughter, Natalie Biden, who was reportedly visiting the University.

Around 3:15 p.m., dozens of Philadelphia police and secret service motor vehicles restricted vehicle access to 38th Street from Spruce to Chestnut streets. After staying briefly in the Guest House as well as Perry World House, Biden exited out of the front door of the Guest House and walked down Walnut Street to the Penn Bookstore. Stopping several times to speak with people on the street, the President told one student that “the most important thing is taking care of your family.”

Upon leaving the Bookstore, Biden walked to his car and waved to the nearly 500 students who had gathered to a swell of cheers before pulling away with his motorcade. After Biden departed, Magill told The Daily Pennsylvanian that the meeting with Biden had been “great.”

“I’m honored to be here on the campus of University of Minnesota, Ann Arbor.”

“Joe Biden Makes Surprise Visit to University of Pennsylvania Campus”
So exactly how surprised was he?

Actually, he wandered away from a stumbling speech, and they finally caught up with him on campus.

At least he didn’t get into an elementary school…

Actually, if Trump had tried this, the entire leftist media and their congress creature friends would have had impeachment charges levied by Monday about how Trump had abused his office to pressure school officials into admitting his descendants.

I think crowds of “triggered” socialism indoctrinated students, flopping on the ground like fish out of water, might have made the news too! LOL!

All around these people described in this article, city of Philadelphia is absolutely falling apart — record-setting murder, homelessness, addiction, two Wawa’s skeddadling ….

Is it not reminiscent of the scene in APOCALYPSE NOW when the colonel breaks out the surfboards in the midst of an active combat operation? smh

We don’t have to attend these colleges.

We don’t have to send our children to these places.

Penn is, of course, where Biden, according to his speeches, was a “full professor.” His granddaughter will be instantly admitted regardless of her grades or the quality of her application, simply because she’s that senile imbecile’s grandchild.
Mere blocks from the campus, Philadelphia’s residential neighborhoods are crime-ridden, opioid-drenched disasters.

The quality of her application will be outstanding. I wish college essay coaches could teach people to write “my grandfather was POTUS and brought $$$ to the university”. That’s the best possible college admissions essay.

That, or being black or not Asian……

I recall that during election day 2020 when it looked like things were not going well, Biden showed up in the Scranton area and met with some selected people, somewhere. After that, all the massive election cheating seemed to ramp up.

We’re a couple weeks away from election day 2022. I expect something similar is happening, maybe as a part of this trip.

My favorite Pennsylvania Democrat electioneering story is from 2016. The politicians were preparing to protect one of their cherished unions by bringing the big hammer down on the independent taxi services Lyft and Uber. The established taxis had threatened to strike during the Democratic National Convention if Uber and Lyft were not banned.

Somebody did the math and discovered that the numbers showed that Uber and Lyft could move all the people just fine with no taxis, whereas the taxis were totally incapable of the job without Uber and Lyft.

So the pols immediately tabled the punitive legislation… until after the convention, at which time they picked it up again.

Politicians are “special” and don’t want their daily lives to be burdened by laws that prevent the common people from doing things. I am reminded of this more during this season than any other, as daily I delete at least a dozen texts and emails containing money begs from political campaigns. (And just as I type this period, Herschel Walker has some “truth” he desperately needs to share with me.)

I’m sure the youts were enthused

I bet Natalie Biden was seriously jumpy, being in “granddad groper’s” presence for an extended period of time.

There are showers on Airforce 1, aren’t there?