The West Bank “site was used by the main operatives of the ‘Lion’s Den’ terrorist group. The forces detonated the explosive manufacturing site.” 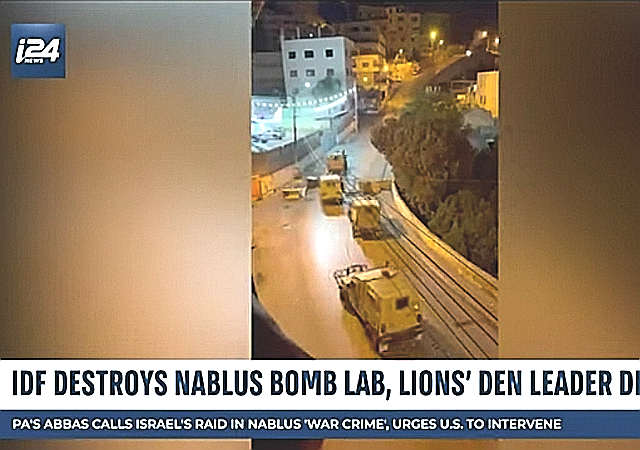 The counter-terrorism raid on Monday night killed several members of the Lion’s Den terror group, including its leader and founder, Wadia Alhuh.

Wadee al-Houh, a top commander of Lions' Den, was killed in the Israeli military operation in Nablus. pic.twitter.com/T1085kbJTo

The terror outfit was behind “a series of shooting attacks against Israelis in recent weeks,” the Jerusalem Post reported Tuesday.

The IDF detailed the terrorist activities of the Lion’s Den in a press release obtained by Legal Insurrection:

“The “Lion’s Den” terrorist group is in responsible for carrying out the shooting attack that killed the IDF soldier Staff-Sargent Ido Baruch, as well as attempting to carry out a terrorist attack in Tel Aviv (an attack that was thwarted by the Israel Police) and the planting of an explosive device in the “Kedumim” gas station.

They also attempted to carry out a shooting attack in “Har Bracha” and hurled a grenade towards IDF soldiers who were adjacent to “Havat Gila’d”.

The terrorist group is also in charge of multiple shooting attacks throughout the City of Nablus. Over the last period of time the terrorist group continued to recruit, plan, and carry out attacks aimed against innocent Israeli civilians.

The military’s spokesperson said that Israel Defense Forces (IDF), the Israel Security Agency (ISA) and the Special Police Unit took part in the joint operation. They raided a hideout apartment that served as a headquarters and bomb lab for the Nablus-based terrorist organization.

“The site was used by the main operatives of the “Lion’s Den” terrorist group. The forces detonated the explosive manufacturing site,” the army’s statement said.

“The troops responded with live fire toward the armed suspects who were shooting at them,” the statement said, pointing out that the Lion’s Den is responsible for carrying out several shooting attacks in Nablus and outside of the city in recent weeks, including the one that killed 20-year-old Israeli First Sergeant Ido Baruch.

BREAKING: Israeli special forces are right now operating in the Palestinian city of Nablus against the new terror group “Lion’s Den”. Reports suggest that at least one terrorist is dead.

Please keep our troops in your prayers. 🙏 pic.twitter.com/lpsDFB6shf

The Israeli strike on the bomb factory and terrorist base in their neighborhood enraged the residents of Nablus. “During the operation, dozens of Palestinians burned tires and hurled rocks at the troops,” the IDF statement concluded.

The slain Lion’s Den chief, Wadia Alhuh, also appears to have a huge fan following among the local terror sympathizers. “Thousands of Palestinians on Tuesday, attended the funeral of Wadia Alhuh, the founder and leader of the militant Lion’s Den group in Nablus who was killed with five others in an Israeli security operation overnight,” the Israeli news outlet Ynet News reported.

Staying true to its character, CNN reported the successful IDF raid, which killed armed terrorists, with the headline: “Six killed by Israeli forces in the deadliest day for Palestinians this year.”

👉 Find out more about the Israeli counter-terror operation against the Lions’ Den in our new video: https://t.co/ywKxUF4tCX pic.twitter.com/H1TqO1OMg9

Good riddance! The only good terrorist is a dead terrorist

Babylon Bee conducted a four year study of dead terrorists and concluded that they are not good for anything either.

You can’t even interrogate them successfully— which imho is the only reason for taking them alive.

6 dead terrorists are not anywhere near enough. It is clear that people in the area support those terrorists, it is also clear that they highly value martyrdom. Take the damn gloves off, drop a thematic bomb, incinerate a 2-mile diameter circle, give them martyrdom on a grand scale. That is what is needed to bring an end to endless terror attacks, tens of thousands of martyr’s.

Why does this publication force Americans to care about a foreign country like Israel? We already give them 4 Billion a year and they have tuition free higher education and health care for all their citizens. Fvck Israel.

Thanks, Vijeta, for passing on the wonderful news, and also CNN’s disgusting take.

The old joke.
Want to have peace in the Middle East? Build a wall around the Palestinians. Every couple of years prop up a ladder and look in. When only one is left standing, shoot him.

Never heard that one before, but I like it!

So called Palestinians are the dredges of humanity. They have no redeeming traits.

They could have ceased hostilities and enjoyed prosperity with Jews, instead they have and raise children to be terrorists. They are hopeless losers.

We have proof now. Teleworking saves lives. Going into the office is dangerous. He should have worn a mask, I suppose.

Best news of the day for me.

For them, all male pigs, pigs who are smarter than them.

more vivid proof that despite fjb and barry’s treasonous support of iran’s efforts to acquire nukes, the israelis call the shots in that part of the world

The Wall Street Journal today featured an article referring to these Arab Muslim terrorists as so-called “militants,” which word and usage strikes me as undeniably euphemistic, as contrasted with the much more pejorative — and, accurate — word, “terrorist.”

In other words, factory orders are down in the West Bank.

In my opinion, all those squatters in Gaza and the West Bank should be given the same treatment they advocated for Jews, drive them into the sea. They represent a huge waste of otherwise perfectly good real estate.

And high security Tuesday in Jerusalem because the terrorists have promised revenge. Groups of police and of border police all along Jaffa Road between King Georgia and the Iriyah light rail station, getting larger and more frequent as you go.

If there is revenge, there should be additional thermic bombs. That is something they will understand.