Franken-Pox: The goal is to swap genes between two currents stains & will attempt to make currently dominant clade more lethal. 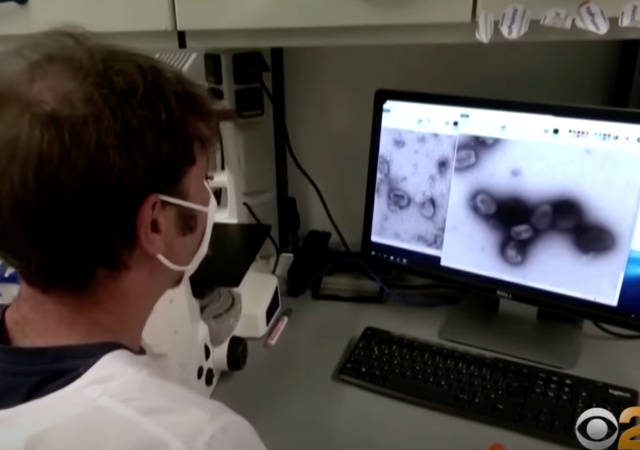 Last week, my colleague Mary Chastain reviewed an exclusive by the UK Daily Mail about researchers at Boston University creating a Franken-Covid strain using the Omicron spike protein (which makes attaching to lungs easier for the virus) with a “wild type” covid virus.

The Daily Mail is now reporting that a government laboratory in Maryland is planning to create a strain of monkeypox that is more lethal in experiments with mice by swapping the genetics between two different strains of monkeypox.

The team wants to equip the dominant clade – which mostly causes a rash and flu-like symptoms – with genes from another strain that causes severe disease.

They hope the experiment will reveal how different genes make monkeypox more deadly, and spur the development of better drugs and vaccines for humans.

But the modified virus ‘poses an exceptionally high risk’ to the public if it accidentally leaks, according to Dr Richard Ebright, a microbiologist at Rutgers University in New Jersey.

Science initially reported this research and set off alarms among scientists familiar with the studies.

If a more potent version of the outbreak strain accidentally escaped the high-containment, high-security lab at the National Institute of Allergy and Infectious Diseases (NIAID), it could spark an “epidemic with substantially more lethality,” fears epidemiologist Thomas Inglesby, director of the Center for Health Security at the Johns Hopkins University Bloomberg School of Public Health. That’s why he and others argue the experiments should undergo a special review required for especially risky U.S.-funded studies that might create a pathogen that could launch a catastrophic pandemic.

But it’s not clear that the rules apply to the proposed study. In a 2018, a safety panel determined it was exempt from review. Monkeypox did not meet the definition of a “potential pandemic pathogen” (PPP), the panel decided, because it didn’t spread easily.

Now, with monkeypox widespread, the National Institutes of Health (NIH) is planning to reexamine the work, but it still might not qualify as “enhancing” a PPP, the agency says. That’s because the study will swap natural mutations, not create new ones, so it is not expected to create a monkeypox strain more virulent than the two already known.

While the current strain of monkeypox is not virulent, currently, SIX Americans are dead after being infected during the most recent outbreak in this country.

Six people who tested positive for monkeypox – two in New York City, two in Chicago, one in Nevada and one in Maryland – have died, local health departments have confirmed.

The New York City Department of Health and Mental Hygiene said it was “deeply saddened by the two reported deaths, and our hearts go out to the individuals’ loved ones and community.”

“Every effort will be made to prevent additional suffering from this virus through continued community engagement, information-sharing and vaccination,” the NYC DOH said.

The two Chicagoans who died after testing positive for monkeypox had multiple other health conditions, including weakened immune systems, according to the Chicago Department of Health (CDPH).

And while 6 out of 21,500 people is not a statistically significant number, it is astonishing that any reasonable scientist would intentionally create strains that would increase this number by any fraction.

Our researchers have to start planning their work by asking, “Should I do this experiment?  More oversight on this type of research should be a priority for our next Congress and our next President.

The more labs you have doing gain of function work, the more chance you have of another lab grown virus getting out of the lab and devastating the population.

I think that is the plan. You need a good crisis to implement permanent changes in law and policy.

And quite a few of the people in charge in the West are anti-human. We’re basically governed by a death cult that wants the global population drastically reduced.

Years ago I would have scoffed at that idea and called it a conspiracy theory. Nowadays? I believe it. They want chaos, and they want death.

No, it’s a great idea. IF you’re Xi, and looking to decimate most of the world’s population that you can’t enslave.

Poor Africa: its people are going to become literal slaves to the ChiComms in the coming years, once the US is fully cut down to size.

Will they release it before the mid-terms?

Why wait for an “Andromeda Strain” when you can build your own??

I thought gain of function research was verboten in the US. Isn’t that why they were funding the Wuhan lab?

I think it’s forbidden for our gov’t to fund it (or direct it).

NIAID is, the last time I checked, a department of our government.

Murphy was an optimist.

Fauci and wife’s wealth ‘skyrocketed’ by $5 million during pandemic:

If this sort of research is so vitally important then why doesn’t the govt build a contained facility in the desert SW in a remote area. Set up multiple containment layers. Establish exacting procedures for handling, storage. Set protocols for those who work there to ensure they are ‘clean’. Everything monitored by cameras. That footage viewed in real time and delay by two separate teams to ensure compliance before the workers depart the primary primary and secondary containment layers to enter the tertiary containment layer.

That would seem to be the minimum level of safeguards appropriate to working in this sort of research. If they can’t be bothered to do so then have them post a bond for the National GDP with the researchers required to overcome the presumption their failures led to whatever crisis ensues when it shows up outside their facility.

I hear Antarctica is nice this time of year. Relatively speaking. Or maybe near the “Elephant’s foot” in the Chernobyl reactor…

As long it is a ‘as you can imagine, they don’t let us out much’ Independence Day depiction of a restrictive facility.

Without a definitive means of defeating a confirmed case, this is just foolishness.

I’m so old, I remember when a truck full of monkeys… waitaminnit, that was just this past January! And it was only in mid-May that monkeypox became a thing! Now, here it is, October, and they’re gleefully forcing it like hothouse okra.

This is exactly what the Wuhan lab was doing. Paging Senator Paul?

“They hope the experiment will reveal how different genes make monkeypox more deadly.”

Why not do an experiment to reveal how to make it less deadly?

Because you need a good crisis that won’t be allowed to go to waste.

I can only imagine what all the labs around the world are creating as we type.

This is always in the corner of my mind ever since the China flu.

Eventually they will succeed in killing us all

They will have to smear the new Franken-Pox all over door handles, gas station and elevator buttons, and vending machines, just to find out what it can do.

So, take a bunch of monkey-pox people, dump them into a giant food processor, and press “Pulse”?

I choked on that one!! LOL!

It’s time to start putting these scientists in prison. Along with their supervisors all the way up the chain to the top person at Boston College.

Mankind is going to end itself but it’s not going to be a in a nuclear war. It’s going to be because a bunch of a-holes won’t stop playing with nasty viruses and one day someone is going to slip up and that will be the end of civilization.

I can only hope it’s a zombie one so at least I can have some fun before dying. 🤣🤣

Like lawyers, government scientists can only do what the government enables and encourages them to do. Law and legislatures have been corrupt for decades, but science never was.

Science now has as little integrity as anything “Obama”, “Biden” or “Clinton”.

I’ll believer they believe in the containment systems when the folks who claim it works live down-wind, with their kids.

I guess we crossed that line of keeping their experiments secret, now they are just advertising it all now and nothing is being done about it.

Nothing’s being done. The only there will be any fall out is if Vladimir bombs it.

Isn’t gain of function research, which this clearly is, illegal in the US?

Hmmm, why do I think gay men are reading this stuff and getting very, very nervous?

Gay men are not particularly physically susceptible to monkeypox, If patient zero had been a straight person, straights would be getting this and gays wouldn’t.

Comes a point where the only rational thing to do is strand all of these “scientists” on an island and infect them with their own creation.

Can we get em to cross Monkeypox with Avian Flu and maybe take out some of the Screaming-D’s flying monkeys?