“They just do not see it as viable for President Biden to run for a second term, they simply think he’s too old, and they’re not sure about is ability to do the job” 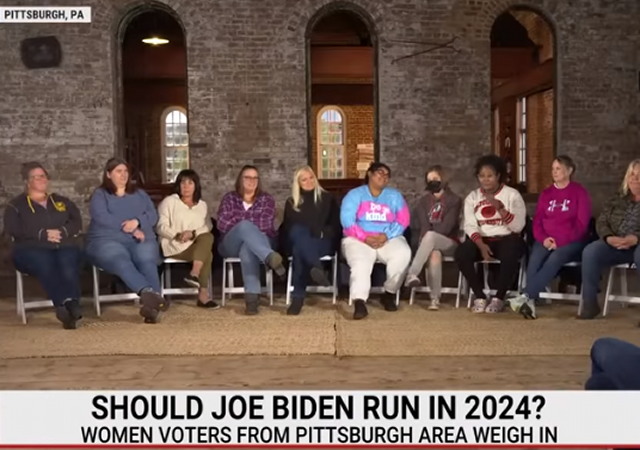 Elise Jordan of MSNBC recently spoke to two focus groups about the prospect of another run for Joe Biden in 2024. The first group consisted of female swing voters in Pittsburgh, PA.

This group did not need a few minutes to consider the question. They almost all immediately said “no” to a stunned Jordan.

“They just do not see it as viable for President Biden to run for a second term, they simply think he’s too old, and they’re not sure about is ability to do the job,” Jordan said on “Morning Joe.”

Jordan held two focus groups, one with female swing voters in Pittsburgh and another with Black Democrats in Philadelphia. She asked the Pittsburgh-based swing voters if Biden should run again and the women quickly answered with a resounding, “No.”

In a clip flagged by Mediaite, Jordan responded, “That was quick, wow. Why shouldn’t Joe Biden run again?”

One of the swing voters answered, “Because too many people will not vote for him,” and many of the other members of the focus group agreed.

African American voters from the Philadelphia area made up the second focus group. They were a little more forgiving of Biden, but not much.

Democrats know this sentiment is out there and that 2024 could be up for grabs.

Hanna Trudo reports at The Hill:

Potential Democratic presidential hopefuls are traveling to New Hampshire with striking frequency, campaigning for midterm candidates while introducing themselves to voters in the first-in-the-nation primary state.

It’s a sign that just weeks before Election Day, the 2024 campaign cycle is already underway.

While most Democrats are there as surrogates, the roster includes some of the same names who ran for president in 2020, jumpstarting the conversation about what the next few years could look like if President Biden doesn’t seek a second White House term.

“There are three categories of visitors to New Hampshire right now on the Democratic side,” said Jim Demers, veteran Democratic operative in the state who worked on former President Obama’s and Sen. Cory Booker’s (D-N.J.) national campaigns.

“There are those who are just the good friends who are coming here because they’ve got relationships with our candidates and relationships with people,” he said. “There’s another group that maybe are of the generation where they feel like, ‘Even if I don’t do something in 2024, it’s a great investment in the future in 2028.’ … And there’s a group that are like, ‘I’m not going to run against Joe Biden,’ but if for some reason Joe Biden actually says, ‘I’ve decided not to run,’ they don’t want to be completely caught flatfooted.”

In the 2020 Democratic primary, there were over 20 candidates.

Can you imagine a similar stampede of candidates if Biden doesn’t run in 2024?

The pedophile has proven quite sufficiently that he should never have run for a first term. Running for a second one is quite out of the question.

Besides, he didn’t really run for that first term. He hid out in his basement and let everyone else do all the work.

Brandon did less to get elected than any POTUS candidate in modern US history. By at least an order of magnitude. And, allegedly, received 81 million votes — about 15 million more votes than any winning candidate has ever received.

That cannot and will not happen again.

It shocks me that MSNBC was shocked.

MSNBC is shocked because they thought they were doing a better job of fooling people.

Unfortunately it does not shock me.

It say a lot about MSNBC. Confirms my opinion they are idiots.

Apparently, they believe their own BS.

Everyone else is waking up while they stay “woke.”

Must have been gambling going on there.

Despite not wanting him to run again, it astonished me to hear black democrats say he would be the one to beat Trump.

My gosh, wake up, people!

Why? It’s no different than hearing people say,
“Brawndo’s got what plants crave.”

1) I rather expect that the focus groups had been debriefed before their taping or that they had been instructed how to answer and Elise Jordan was in on it.

2) It also may be a way to set the scenario for Biden NOT running again regardless of what he may blurt out and the Democrats have someone already picked to take office after whatever they use as cover after they [as they want to] kill off the electoral paradigm. Maskirova

I suggest someone with executive experience running a state, like Stacey Abrams.

She a galactic overlord or sumpin.

Well, he would be a step up from Joe.

If Biden is too far gone to follow the script, they have to replace him. This is very likely the start of that set up.

If they can keep him from a complete meltdown they will hold on to him until Jan, 21 2023 so his replacement will have a chance at two additional terms.

I just has a thought as to why they might not do that. If Kamala is still his VP at the time they drum him out she won’t be eligible for two terms which would be a good reason to cut her loose for 2024. I came to the previous opinion when I thought they would still want Kamala but she has show herself to be too unlikable to win on her own hook.

I think you misunderstand the formula. Kamala would be allowed two full terms if she does not advance to the office until less than one-half of it remains. That would be some date after 21Jan2023. If Joe were shown the door before 20Jan2023 then she would take office then and in serving the remainder of the term, which is more than half of a full term, thus leaving one full term for her.

Some opined that that was the original plan: get Joe through 2 years plus a couple days and he resigns. Harris assumes the job with two fresh terms ahead of her, meaning ten years of stellar Dem rule. That was before it became evident the she was the blithering idiot, affirmative-action product that she is… If there were a “neat” way to get rid of her today they would do it. She will never win the Presidency as an actual candidate.

He follows the script very well.
DON’T FORGET TO TELL THE LOCK JOKE.

The fix is in. Obama decided to through Biden overboard which is why the DNC news media have stopped covering up Biden’s scandals. Like the millions Biden has received from our enemies Russia and China.

Too bad tCongress won’t do anything. They need to talk with Killary’s people.

Phrasing matters. What if they had asked, “Should the senile corruptocrat Brandon steal another election?”

That’s what happens when a extremist socialist’s alternative reality bubble is breached and a handful of red pills smacks he/she/them/it/[fill-in-the-blank] in the face.

Kamala Harris is almost sure to be the incumbent president when the 2024 election takes place, and everybody knows it.

If Biden resigns before Jan 3, she will be able to appoint Liz Cheney as VP, but if Biden is still president on Jan 3 and either House flips, the VP position will be vacant in 2024.

Not quite. A VP assuming the Presidency can nominate whomever they want as a potential VP. The nominee must be confirmed by both the HoR and Senate. As a practical matter no nominee not already cleared with and agreed to by the HoR and Senate majorities would be nominated. To do so would risk the first important decision of the new President ending in failure in a very public humiliation.

The bottom line: they picked reliably Democrat voters, women and blacks, and thought the question was a shoo-in.

Biden’s not going to be president in two years. The only way the Dems won’t nominate Kamalatoe is if she’s legally bribed with the n0-show, big-bucks “job” at a foundation or university.

Seriously, who typed “weigh in” with that picture. Looks more like a weight watchers group than an informed panel.

Enormous fat women can be voters too!

“Too old? What are these rubes talking about? Joe is doing a great job! Everyone here at the network says so, so that means everyone in the country thinks that way too!” – MSNBC

Red Tsunami and the long knives of the scumbag democrats will come out for pedo joe.
Dems will chop him up and puree him down the toilet for the next two years.

They have to pretend until we get to the Kamala Event Horizon (10 years).

Woops, that was supposed to be a response to healthguy below.

Just to let you in on a dirty little secret of the lefty media and the lefty politicians.

NONE of them outside of the Biden cabinet want him to run again at all. This will he or won’t her is their little game of building up intrigue. It’s yawn-worthy. We already know he won’t run again, but if they can pretend like it’s unclear and more about his choice then they can also pretend like he’s mentally capable now.

Biden allegedly won, hope that doesn’t make me a “denier” and get me a visit from the FBI, only because of the independents and the Hispanic vote. The Hispanic Block is moving to Republican and the Independents want nothing to do with Brandon. No way he can win unless they cheat better than last time.

Note that Ms. Jordan first described Pres. Biden as the Democratic party’s “figurehead” and then hastily got back on narrative and called him their “leader”.