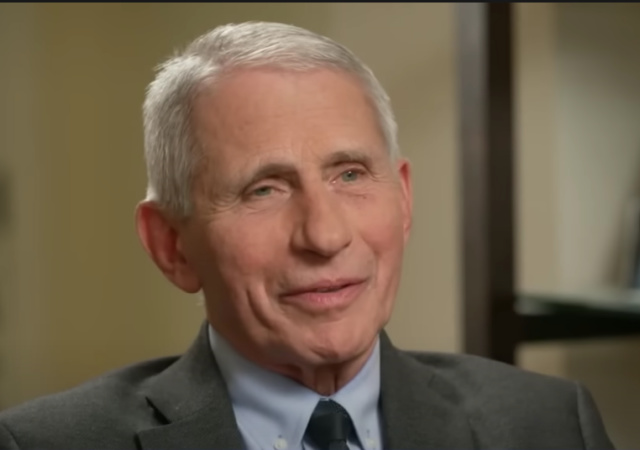 As White House medical advisor and covid godlet Dr. Anthony Fauci prepare to retire, he is desperately reworking his legacy.

This weekend, speaking to ABC News, Fauci denied that he was responsible for driving the public health consensus that schools should have discontinued in-person instruction for many months as part of pandemic mitigation measures.

“Was it a mistake in so many states, in so many localities, to see schools closed as long as they were?” host Jonathan Karl asked.

“I don’t want to use the word ‘mistake’ John because if I do it gets taken out of the context that you’re asking me the question on,” Fauci replied. “Could there be too high a price?” Karl clarified, likely referencing the plummeting academic performance, social isolation, and mental health crisis that school closures fueled.

“What we should realize, and have realized, is that there will be deleterious collateral consequences when you do something like that,” he said. “The idea that this virus doesn’t affect children is not so. We’ve already lost close to 1500 kids so far.”

Karl interjected, “But much less than the older population obviously.” Despite the fact that children faces significantly lower risk of developing severe health complications after contracting Covid-19, they were forced to mask in schools for nearly two years. New York City only recently dropped its mask mandate for public pre-school and daycare kids.

Fauci reminded Karl that he, allegedly, repeatedly urged school districts to keep schools open as long as possible. “No one plays that clip. They always say ‘Fauci was responsible for closing schools.’ I had nothing to do [with it]. I mean, let’s get down to the facts,” he asserted.

“Was it a mistake…to see schools closed as long as they were?”

FAUCI: “I had nothing to do with it!” pic.twitter.com/azgKnyd1VT

The trouble for Fauci is that he has taken both sides of any position regarding covid. Let’s focus on some of his statements and actions that specifically deal with school lockdowns.

To begin with, Fauci was on the Coronavirus Task Force, which created the Presidential Guidelines promoted as “Two Weeks to Stop the Spread” that morphed into 30 days…and then, in some parts, two years and still continuing.

South Dakota was the only state that did not shut down its schools (among seven that did not direct businesses to close except for non-essential activity). South Dakota Governor Kristi Noem noted the dire predictions about her state that Fauci made, which turned out to be completely wrong.

In South Dakota, I provided all of the information that we had to our people, and then I trusted to make the best decisions for themselves [on how to prevent the spread of the virus] for their families and in turn their communities,” she said.

“We never focused on the case numbers. Instead, we kept our eye on hospital capacity. Now, Dr. Fauci, he told me that on my worst day I’d have ten thousand patients in the hospital on our worst day, we had a little over six hundred.”

Fauci created a stir with his comments about “kids could get infected‘ when Florida Gov. Ron DeSantis boldly opened his state’s businesses and schools in April 2020.

“If you have a situation where you don’t have a real good control over an outbreak and you allow children together, they will likely get infected,” said Dr. Anthony Fauci, the director of the National Institute of Allergy and Infectious Diseases, during the daily news briefing of the White House coronavirus task force.

Fauci, who has become the medical face of nation’s pandemic response, said he was not “specifically speaking about Florida,” but he was responding directly to a reporter’s question about DeSantis, who on Thursday said that opening schools in May was at least a consideration.

Fauci has a few regrets, given the magnitude of failure associated with “Two Weeks to Stop the Spread” and other pandemic policies to contain the uncontainable virus.

[Washington Post national health reporter Dan] Diamond asked Fauci if there was anything he wished he would have done differently throughout the pandemic given the risk for information becoming “gobbled” by social media, as Fauci put it.

“You know, the answer is yes, Dan. I mean, my goodness, no one’s perfect. Certainly I am not,” Fauci said.

“When I go back in the early months, I probably should have tried to be much, much more careful in getting the message to repeat — the uncertainty of what we’re going through,” Fauci said.

He recalled how in the very early days in the pandemic, he had advised that lifestyle changes were not necessary at the time when cases were extremely low, while also adding the caveat that conditions could “change rapidly and we need to be prepared.”

In conclusion, Fauci was one of the policymakers who created the guidelines used to lockdown schools, ginning up fear about those rules not being followed and hedging answers that provided school districts bureaucrats across the nation the excuse to keep schools closed. He has everything to do with the adverse impacts on schoolchildren we will deal with for the next several years.

“The idea that this virus doesn’t affect children is not so. We’ve already lost close to 1500 kids so far.”

He never says whether there were comorbidities involved, does he?

Perhaps if the didn’t fund “gain of function” research, illegal in this country, with the ChiComs, we would not be having this conversation about his other hideous mistakes.

Hasn’t someone thrown him across the Potomac yet?

Before Dr. Fraudchi gets thrown across the Potomac, please make sure he has a millstone tied around his neck.

I’m ok with a regular cinder block or used crankshaft from a MOPAR 421….

Shouldn’t that be Into the Potomac?

Asking for a friend. 🙂

The whole point to the lockdowns wasn’t health and safety, it wasn’t to slow/stop the thread. The whole point of the pandemic policies was to destroy Trump’s economy. That was it. His numbers were too good .

Yep. These people in power are profoundly evil.

Good thing he’s not under oath — never mind. Democrats lie under oath all the time and nothing is ever done about it

The thing is, as often as this POS lies, you would think he would be better at it.

Coming soon – “No one ever forced you to take the vaccine. We merely suggested it.”

Trump hired Scott Atlas, but allowed Fauci and Birx to call the shots. I voted for Trump twice and would again, but he is an idiot.

I don’t know why you’re getting downvoted, but I wholeheartedly agree. I am the biggest Trump supporter out there, but he was an absolute dunce on all of this Wuhan Virus BS. He called it correctly about the virus being a hoax but he let these evil people push him around and he decided to treat the Virus seriously. He should have staked his entire presidency on the opposite and stood against everything these evil people supported.

Just the headline made me laugh. Does he really think no one has a memory?

History is SO yesterday

The Ministry of Truth is hard a work changing history.

The vile Dumb-o-crats’ brazen mendacity is matched by their brazen historical revisionism.

And, this reprobate, career apparatchik — the highest-paid employee in the U.S. federal government — will be retiring with a nearly $500K annual pension annuity, courtesy of the U.S. taxpayers who’ve been paying his similarly-inflated and undeserved salary, for decades of his manifest prevarications and incompetence.

Oh by the way, exactly who set his salary and retirement amounts?

I know of no Federal Pay Scale with amounts that high. Perhaps I’m just out of touch?

I don’t know how the federal pay scale works; I think it’s different for each agency. All I know is that employees such as Fraudci who’ve spent decades in a lofty government sinecure are grandfathered in to extremely generous salary and retirement pension benefits, much more generous than what current federal employees receive. Fraudci’s high salary and benefits are the result of his insanely long tenure in government — well over forty years, I believe.

And, this doesn’t even account for the truly scandalous — and, scantly-covered — revelation, a few months ago, that Fraudci and some of his cohorts at NIH have received millions of dollars in pharmaceutical patent royalty payments, a clear conflict of interest.

Fauci has been practicing up on his Sgt. Schultz imitation.

Next he’ll be taking the 5th.

His days of ‘I Am Science’ are over. Too bad his days as federal Prisoner #750793 will likely never begin.

I wonder if he and Garland would wear the same size orange jumper. They’d look great as cellmates, staring at the camera from behind the bars of a prison cell currently occupied by J6 political prisoners.

Excellent Book the Real Doctor Fauci by Kennedy is well sourced and has great insight. I am reading it a second time. Gate’s is behind this. It is all about control by the world elites and what they are doing to us is worst than anything the Nazis or Russians did to their people

This is in the same vein as all the “progressives” trying to pretend they didn’t claim the jab stops transmission, when that was the core justification for forcing it on people who didn’t want or need it.

That used to work when there was NBC, CBS, and ABC who would not show what they actually said. Now you can see the clips on the internet and yet they continue to lie.

If not upon his command, then upon his advice. People are prone to take a knee, beg, defer dignity to mortal gods and goddesses in secular societies ruled under pro-choice ethical religions.

A partial truth is still a lie, and very effective.

Of course he can’t order schools to be closed. Instead, governors closed them on his suggestion. That was purposeful, deliberate and intentional as nobody has their fingerprints on it and everyone responsible can walk out the door without having to face any consequences. Which is exactly what’s happening now.

I Warned You; Now You May Well Pay

S-protein specific jabs have marked every single person they were given to. You must assume that additional “boosters” whether of the original formula or some other will not attenuate this risk and might accelerate it. Only time may — and I repeat may — attenuate your risk of getting hammered if such “shows up” in the environment whether by accident or otherwise.

Role of spike in the pathogenic and antigenic behavior of SARS-CoV-2 BA.1 Omicron

We generated chimeric recombinant SARS-CoV-2 encoding the S gene of Omicron in the backbone of an ancestral SARS-CoV-2 isolate and compared this virus with the naturally circulating Omicron variant. The Omicron S-bearing virus robustly escapes vaccine-induced humoral immunity, mainly due to mutations in the receptor-binding motif (RBM), yet unlike naturally occurring Omicron, efficiently replicates in cell lines and primary-like distal lung cells.

what an embarassment to his family

The Kennedy book is now a film It is currently streaming for free for the next few days. Watch See how the CIA and military were involved with all this virus.