“The wall will reduce the illegal immigration, drug running, arms trafficking, cattle theft and contraband that plague both nations” 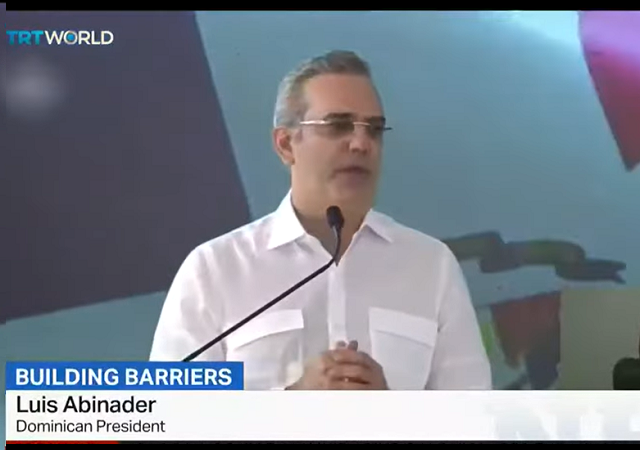 Those racist, white supremacist, xenophobic (Dominican) Republicans are at it again. Building a wall, when we all know walls don’t work, just to keep out their Haitian neighbors and fellow global citizens. The inhumanity! The horror!

No, I didn’t wake up lobotomized and therefore a leftie; it’s just fun to mock their ridiculousness every now and then.

Seriously, though, the Dominican Republic is indeed building a wall along its border with Haiti to try to control the stream of Haitians pouring into their country.

Haitians fleeing hunger and violence will soon be met with a 13-foot-tall border wall meant to keep them out of the neighboring Dominican Republic.

The concrete and steel structure will stretch some 102 miles (164 kilometers) along the border of the Dominican Republic. Only one border wall in all of the Americas — the one separating the US from Mexico — is longer.

In the Dominican Republic’s capital of Santo Domingo, government officials diplomatically describe it as a painful necessity to insulate one of the region’s most successful economies from one of the hemisphere’s most intractable problems.

The wall is also, at some level, a reproach to an international community that has spent billions in Haiti but has been unable or unwilling to alleviate the growing humanitarian crisis.

Given the conditions in Haiti, it’s hardly surprising that Haitians want to leave.
What happened to the billions of dollars sent to the tiny country? That’s a rhetorical question, of course. The corruption surrounding both Haitian relief efforts over a decade ago and that of the Haitian government are well documented.

On the other side of the border, Haiti is in free fall. The Creole-speaking country, which won its independence from France in 1804, has per-capita income one-fifth that of the Dominican Republic. It’s mired in political instability and in the grip of powerful, murderous gangs. Electricity and gasoline are often scarce. Nearly half of Haiti’s 11 million people regularly go hungry, according to the World Food Program.

Amid bloodshed and poverty, tens of thousands of Haitians are internally displaced and the number of people fleeing the country for the Dominican Republic and elsewhere has surged. Deportations in the first half of 2022 already surpassed the total for all of last year.

It’s in this context that the Dominican Republic recently awarded a $32 million contract to the Cofah Consortium to build the first 33 miles of the wall.

. . . . Contreras, the economy minister, says the wall is more than just a brute obstacle to keep Haitians out.

“This is not just a fence, it’s not just a wall. It’s part of a larger development package where the fence simply provides security,” he said in an interview. “Our border is terribly porous and very insecure, and we need to deal with that.”

The wall will reduce the illegal immigration, drug running, arms trafficking, cattle theft and contraband that plague both nations, he said. It will also channel migrants, goods and services through legal checkpoints. In addition, the government is earmarking money for a port, a tourism hub and trade projects along the border that Contreras says will generate jobs for both nations.

Of course regressive activists are comparing the wall to President’s Trump’s and screeching about blah blah.

“Every wall in the world has been a failure — from the Berlin wall to President Donald Trump’s wall” on the US-Mexico border, said Joseph Cherubin, the head of Mosctha, a non-profit that helps Haitian workers in the Dominican Republic. The Dominican wall “is a waste of money meant to satisfy a group of nationalists.”

I’m not sure why lefties always mention the Berlin wall as if there is even a remote comparison between a wall intended to cage people in a tyrannical communist dystopia and a wall intended to help maintain a free nation’s sovereignty, indeed our very existence as a country. Attempting to leave the commie East Berlin dystopian nightmare meant possible (probable) death, yet thousands faced that fate on the way, they hoped, to freedom.

Reuters reported at the time:

“The benefit for both nations will be of great importance,” said Dominican President Luis Abinader shortly before pushing the button to begin pouring concrete into the foundations of what will be the wall in the province of Dajabón, some 230 kilometers northwest of the capital.

. . . . Abinader estimated the border wall will reduce the smuggling of commercial goods, weapons and help fight organized crime in both nations.

He started the project, which aims to build a 164 kilometer wall, ahead of the anniversary of the Dominican Republic’s independence from Haiti on Feb. 27, 1844.

Abinader said the first phase of the project will be completed within nine months at the latest.

The 20-centimetre-thick concrete wall topped by a metal mesh will be 3.9 meters (12.8 ft) high and will have fiber optics for communications, movement sensors, cameras, radars and drones.

The project also includes the construction of 70 watchtowers and 41 access gates for patrolling.

Good on them. If only Team Biden would follow their very sensible lead.

Dominican Republic average IQ 82, Haiti is 67, neither is likely to improve other countries competiveness.

Where’s Rafael Trujillo when you need him?

The Dominican Republic didn’t kill all the white people in 1804 so retained some useful genes.

Just like Spaniards played a big role in raising Mexico’s IQ. Probably the greatest gift Colonialism gave more primitive people was higher intelligence. It is a shame that most people do not appreciate this.

The Berlin Wall worked exactly as intended, until it was torn down. We objected to the purpose behind the wall, namely to keep people in. It was not a failure at all. Walls work, which is why every little fiefdom in Europe had one, at one time. Keeping marauders out has always been a worthwhile goal.

And I wonder how many politicians all around the world live in walled-in homes and communities? I imagine it is at the very least 90% of them.

From the Berlin wall to President Donald Trump’s wall? Why not reference The Great Wall of China, Hadrian’s Wall,the Maginot Line, or exclusive Democrat estate walls? There’s a vast difference between walls and fences designed to keep foreign invaders out, and walls intended to prevent folk escaping a Far Left dictatorship.

“Haitians fleeing hunger and violence will soon be met with a 13-foot-tall border wall meant to keep them out of the neighboring Dominican Republic.”

Wait, aren’t all cultures and attitudes of equal worth?

More like “Haitians wanting to bring hunger and violence will soon be met with a 13-foot-tall border wall meant to keep them out of the neighboring Dominican Republic.”

That was years ago. Their screams have now travelled to Earendel.

Maybe the Clintons can help out Haiti.

Yeah! I recall that the Clinton Foundation was all about helping Clintons, um, I meant, poor Haitians. There is probably some serious cash still there (that hasn’t been consumed in chardonnay….)

Too bad they mysteriously shut it down when Hillary went down in flames in 2016…..

The people who needed help mysterously commited suicide, so the Clinton’s used the money for something else.

FYI, the Clintons did do a photo shoot in Haiti several years ago. Well, technically it was on Epstein’s Island, not Haiti. And Hillary was green screened in. But it’s the thought that counts.

Haiti is beyond help, yet still good usable for fund raising.

I recommend reading “ The Feast of the Goat.” I must say that the tone of this article and the comments display a very hard, ingrained racism.

“Read this book, you racist” isn’t a very good recommendation

There is a difference between racism and disgust for stupid, lazy, useless people.

OK, so what? You’re racist too, the Haitians are, everyone is. It’s normal to prefer people like yourself. And we’re not blaming the Haitians. We are appalled that whatever chance they had to succeed, the Clintons seem to step in to kneecap them.

By the way the book looks interesting. Isn’t it about the DR? What sort of racism are you referring to, it’s not about Haiti is it?

Kamala Harris recently visited their wall. During her long word salad, she accidently placed her hand on an elephant which was carrying a load of building blocks. She touched the tail said, “It feels like a rope to me.”