“The lawsuit alleges that the name change breaches an agreement between the State of California and Hastings, when he gave it $100,000 in gold to establish the school.” 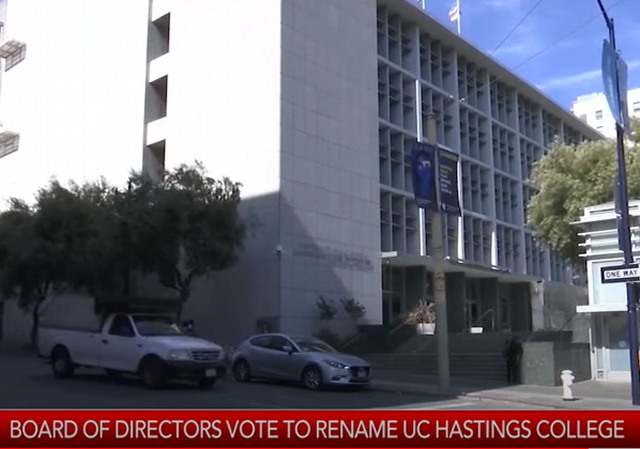 The school’s namesake Serranus Hastings, was the first chief justice of California and was linked to the killing of Native Americans in the 1850s.

Now his descendants are suing over the name change.

A group of alumni from the University of California Hastings College of the Law and six descendants of its namesake Serranus Hastings sued the state and school officials Tuesday to stop them from dropping the Hastings name.

Hastings was a California Supreme Court justice and founded the law school in 1878, but historians have said he also orchestrated killings of Native Americans in order to remove them from ranch land he purchased in Northern California.

California Governor Gavin Newsom on Sept. 30 signed a bill authorizing changing the school’s name to the University of California College of the Law, San Francisco, after years of debate over Hastings’ legacy.

“Although there is no known evidence that S.C. Hastings desired, requested, or knowingly encouraged any atrocities against Native Americans, the accusations against S.C. Hastings soon snowballed,” the San Francisco state court complaint said.

Bradford Betz of FOX News has more on this, including some backstory on conditions that were put in place when the school was founded:

The lawsuit disputes AB 1936’s portrayal of Hastings, saying there is no direct evidence of him committing atrocities against Native Americans.

“Hastings, a lifelong Democrat, was a giant in California history, our first California Chief Justice, and like many founding figures, is the latest victim of activists rewriting history to fit a contemporary agenda, with scant factual basis, no due process, and the ends justifying the means,” said Harmeet K. Dhillon, CEO of the Center for American Liberty, in a statement.

“In his time, Hastings was a civil rights leader and neither he, nor his descendants or the graduates of this fine institution, deserve the smear job orchestrated by politicians for their own purposes,” the statement continued.

The lawsuit alleges that the name change breaches an agreement between the State of California and Hastings, when he gave it $100,000 in gold to establish the school. Per the agreement, Hastings would serve as its inaugural dean, an heir or representative would always hold a seat on the school’s board of directors, and it would forever be called the “Hastings College of the Law,” according to the lawsuit.

Here is the statement from @UCHastingsLaw in response to the lawsuit about the name change: pic.twitter.com/dQJN4OZ4vA

As I have noted repeatedly, no school should have to change its name as long as Yale University is still named for Elihu Yale, who was actively involved in the slave trade.

Yale will never change its name because it’s a billion dollar brand and because students want to say they go to Yale, not Ivy League University of Connecticut.

As long as Yale doesn’t have to change its name, neither should any other school.

oh this could be fun. What is the current value of 100k in current money? California doesn’t have that kind of money to repay the grant.

I looked it up – about $3 million. you couldn’t fund a law school with that money today, so I think the website I found is wrong.

I like that number better! Make California pay it all in cash, no credit or “in-kind” just straight cash or in GOLD.

They should demand repayment in gold – ounce for ounce as it was given.

A million dollars if you go by the value of gold coins, ie. double eagles.
However $3M if one goes by purchasing power.

And add 170 or so years of interest, as the Hastings family could have otherwise invested that money…

I don’t think interest would be warranted, because for all that time he was getting what he contracted for. It’s only now that they’ve broken the contract, so they should only have to refund the initial investment, which as other commenters have said comes to some $8M.

“linked to the killing of Native Americans in the 1850s.”

So was pretty much everybody else in California, including their fellow “Native Americans”.

He was a Democrat. That practically assures he was a racist. Did he commit atrocities? I don’t know, but “racist” is enough to cancel him.
Still, his heirs have a claim on the gold, ounce for ounce, the only fair way to pay it back.

“The lawsuit alleges that the name change breaches an agreement between the State of California and Hastings, when he gave it $100,000 in gold to establish the school.”

Or, they could say: “Change it to whatever you want. We want the $100,000 back, increased annually by the historic consumer price index, and compounded annually at the historic prime rates. Oh, and we want it treated as a municipal bond with no tax.”

I’m neither an accountant nor a mathematician but I suspect that’s going to be an eye-watering number, even for a Dem politician.

On the other hand, could a descendant sue someone for defamation, a la Gibson’s Bakery?

No. You can’t defame the dead.

Wouldn’t it be a moot point then? They are defaming Hastings.

As a matter of law, you can’t defame the dead, no matter what you say about them. You could say that Mother Theresa was a secret Satanist, and sacrificed thousands of babies to Satan, and there is nothing anyone could legally do to you about it. People write scandal biographies of famous people, that they know they can’t publish while the person is alive, so they keep them under wraps until the person is safely dead. Once that happens they can publish with impunity.

But in the case of The Gibsons, it was a libelous action against “the brand.” Are any of the current Hastings being defamed by association with the name? Do any of them run a business which is being affected?

I could go with Wakanda school of law.

So many freaking blacks believe it was a real place.

Was a post on Facebook the otehr day about how the Europeans came to Africca and overthrew all the big powerful African kingdoms and colonized all of Africa. So somehow they arrived in a few ships over the oceans and overthrew powerful large powerful kingdoms that couldn’t defend their own shores… And, Europeans never actually colonized Africa, mostly drew lines on a map. I think South Africa and RHodesia were the only places where there were actual European settlers. 50 miles inland in most of Africa is not hospitable or very survivable for non-Africans, and not even that good for Africans…

But it when on to say that Africans must unite again (they were united????When???) to throw the whites and Asians out. Unite. All of Africa, a pan-Africa. I commented before they united all of Africa they should first get the Hutus and Tutsis to stop killing each other and figure out a way to get teh Xhosas and Zulus to live togther peacefully. Once they figure that out, they can start working on a pan-Africa.

The school owns land & property in an exclusive (but “ugly” by SF standards) part of a very expensive city, plus preeminence & autonomy within the University of CA system. And alumni in strategic positions throughout the CA legal/business systems. $300M doesn’t come close.