German language expert: “We have no German word for “woke” so we borrow it from the English.’ 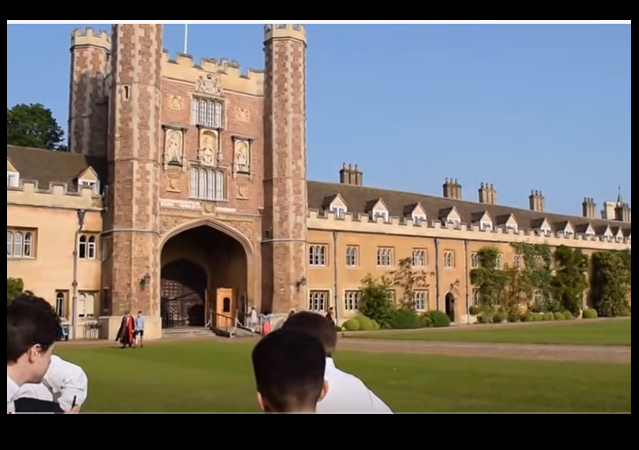 Western civilization is under attack, one culture and one language at a time.

As an undergraduate, I studied German as part of the requirements for the science degree. When my son got bored with Spanish in high school, he asked to learn the language, and we spent a year with a fabulous instructor associated with the German Pacific School in San Diego learning “der/die/das.” German has been helpful to both of us during our many adventures in Central Europe.

So, imagine my shock at discovering that one of the most prestigious language schools in the world thought it was a great idea to teach “woke” German.

It aimed to encourage students to speak more “inclusively” and not fall foul of those who may be offended by sex-specific pronouns. But the University of Cambridge’s decision to say Auf Wiedersehen to teaching gendered German has prompted warnings from linguists that students risk making a fool of themselves when talking with native speakers.

When writing, they may render feminine nouns unisex by inserting an asterisk before the suffix — a nonstandard usage known as the “gender star”.

They noted that “in extended German texts grammatical structures can inhibit inclusivity . . . relative and other pronouns, for example, are obligatorily marked for grammatical gender, so going gender-free is difficult to achieve”.

I am not the only one appalled.

Tuition costs for the degree run to £9,250 a year – but linguists said attempting to converse in the ‘trendy’ tongue would get you laughed out of the bierkellers and berghüttes of Bavaria.

Oliver Baer, of the German Language Association, warned that non-native speakers trying to chat using the neutral version ‘stand a good chance of making fools of themselves’.

‘It’s like Monty Python is back,’ said the Dortmund native. ‘I would hate to recommend it to any Englishman. Although it’s accepted, it’s not respected to speak like that in Germany.’

But he added: ‘Fortunately, we have no German word for “woke” so we borrow it from the English.’

Although Mr Baer agreed issues of gender equality were ‘very respectable and important’, he said: ‘The method of implying it through changing language is totally useless, and it won’t work.

„Language doesn't evolve from the top down. Maybe you can do that in North Korea, but not in our society.“ – Oliver Baer, Vorstandsmitglied des VDS, zu den Kursen in Genderdeutsch, die die ⁦@Cambridge_Uni⁩ anbietet. https://t.co/xdg8EoaTd7

Cambridge is unmoved by the harsh criticism.

But despite this and the fact that ‘gender as a grammatical category is part of native speakers’ language competence, and overlaps only partly with gender as a real-world phenomenon and a lived identity,’ Cambridge insists that the gender-neutral and non-binary terms must be included in the syllabus.

A Cambridge spokesperson, in a statement provided to MailOnline, said: ‘As it clearly states on the Faculty of Modern and Medieval Languages and Linguistics website, ‘students are free to choose for themselves how to engage with inclusive language when speaking and writing in German.’ To suggest otherwise is entirely wrong.’

Perhaps Cambridge will change its policy when potential new students realize the degree isn’t with the money spent or the time invested.

I'm really glad I learned German somewhere other than at Cambridge University. No self respecting native speaker of German would ever accept such woke nonsense (particularly as it is even more nonsensical in German than it is in English).

I would like to conclude by sharing one of my favorite songs by the German folk-rock group, Faun:

***FROM MARY: Here is my favorite song by the German metal band Rammstein!

Marxist have been infiltrating our educational system
The ballot box and jury box haven’t helped so far
Perhaps it’s time to open the 3rd, aka Pandora’s box

That’s ok, the Syrian migrants want “das Frauline” and will later change the language to Arabic.

Sorry, that was meant for PaddyM.

How could it be worst than self appointed “expert” white leftist Karens and pajama boys telling Latinos that they are now “latinx?”

All this for a tiny percentage of the population?

I think it’s wonderful that people will be able to use “sie” as a pronoun instead of the transphobic “sie”.

With a deep bow to Schiller. (What would he have said about our present-day thought police??) Oh, and I guess the play will be cited as “Das Jungfrau von Orleans” —But the ‘-frau’ also indicates gender. So we must have “Das Jungman von Orleans”. But ‘Man’ will remind English speakers of ‘Mann’, so then we’ll change it to ‘Jungperson’? And what would more recent writers, like Thomas Person, have thought of these changes?

Time to call in the nutcrackers then.

Nutcrackers….is that some sort of reference to woke feminist chastisement of men. Yikes

Perhaps, if “woke feminists” got anywhere near, um, nuts….

538. There is a related case (though perhaps it will not seem so) when, for example, we (Germans) are surprised that in French the predicative adjective agrees with the substantive in gender, and when we explain it to ourselves by saying: they mean: “the man is a good one.”

– WIttgenstein, remarking on different feelings of gender in different languages

Sitzpinkler is masculine, by the way.

There are roughly 450 surviving Indo-European languages, from Sri Lanka to Spain. Virtually all, like maybe all but a dozen, have gendered nouns. So, to the Cambridge linguists, I say: take your cultural imperialism and shove it. Wahnsinnigen Idioten!

They’d be teaching woke, gender-neutral, Spanish were it not for all the Democrat votes they’d lose.

Universities are now more interested in granting a Bachelor of Lingui-babble and Master of Social Idiocy degree.
This fad can’t end soon enough.

Herr Tierney, my high school German teacher, is spinning in his grave.

Are made-up gender neutral sentences in German even always intelligible?? Without agreement, one is sometimes fumbling for whether the article is in fact a relative pronoun.

The rabid “de-colonizers” at Cambridge have really screwed this one up! This is clearly the most egregious example of cultural appropriation there is: ‘Speak your own language the way we English speakers want—or else!’

I don’t even know how you’d do German without gender. Make everything neuter? das Mann? das Frau? Ein kleines Nachtmusik?

The word for neuter, by the way, is “saechlich”, thing-like. Are we all to be thing-like?

When I was in the Army one of my co-workers spoke German with a Texas accent. The Germans thought is was cute and gave him credit for trying. This nonsense, however ist ganz Kwatsch!

I always found “scheisskopf” to be gender neutral…

Good golly! There is no more gender-screwy language on the planet than German! As Mark Twain observed, it it, a young lady (Das Maedchen) does not have sex, but a turnip (die rabe) has.

In many an Indo-European and Semitic language, the masculine does double duty for the neuter or ambiguous gender. Hence, we geezers practice pronoun agreement such as “When someone calls you, answer him (not them).”

Dear old Chinese doesn’t gender its pronouns, yet nobody could ever accuse it of fostering an egalitarian traditional culture.

I suppose I ought to be proud to be an American, since it seems the silly provincialism of our radical feminists and others of their kidney is crossing the pond and impacting august old institutions elsewhere. But this is something of which I cannot be proud.