Republican businessman Rick Caruso is slightly ahead of Democrat Karen Bass in a recent poll. 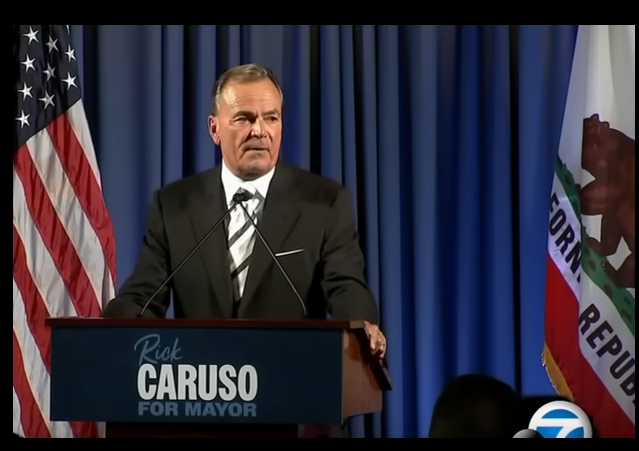 I rarely get to report good news from the People’s Republic of California. However, the red wave sweeping the nation might make it as far as Los Angeles.

Mayoral candidates, Republican businessman Rick Caruso and Democratic Congresswoman Karen Bass, are in a dead heat in the race to be the next mayor of Los Angeles.

Caruso is slightly ahead.

The poll shows Caruso, a political newcomer who has largely self-funded his campaign, with a 3 percentage-point lead (39.8% v. 36.8%) over Bass, a former state Assembly speaker and current congresswoman who has racked up endorsements from some big-name Democrats with national profiles, including President Joe Biden.

But the 3-point lead is too small to be statistically significant, meaning the race to become mayor of the nation’s second-largest city could remain a nail-biter through election day.

The Southern California News Group poll, conducted by Irvine’s J. Wallin Opinion Research, surveyed 400 likely voters in L.A. about the biggest issues facing the city, which mayoral candidate they prefer and whether they support the two city initiatives on the ballot.

The interviews took place Saturday through Monday, Oct. 15-17, and included both English and Spanish speakers using landlines and mobile phones. The respondents matched the demographic composition of the region. The margin of error is +/- 4.9%.

Bass’ case was probably not helped by Biden’s appearance at a recent campaign event.

During a visit to Los Angeles last week, Biden praised the congresswoman, a finalist in the search for his vice presidential running mate in 2020, and reiterated his endorsement of the “soon-to-be Ms. Mayor.” The two appeared alongside current LA Mayor Eric Garcetti, a close Biden ally, and other California elected officials.

In contrast, Caruso has struggled to shake off Democratic skepticism.

“If I had a dollar for every late-election poll portending unexpected results,” quipped Gil Duran, a veteran Democratic operative and political columnist. “But everyone loves a nail-biter.”

Duran told the Washington Examiner that “an 18-point swing in likely voters in two weeks seems improbable,” even as Caruso “is flooding the airwaves.”

Tune into KJLH tomorrow, October 23 at 7pm PST to join host Starlett Quarles and me for a conversation with KJLH listeners. I encourage you to call in, ask questions and discuss how we lift up LA’s Black community and tackle LA’s most pressing issues — together. pic.twitter.com/YNnO0EwLOH

Caruso’s cause likely helped when the Bass-supporting city council members and a union leader unleashed racist remarks towards blacks, Koreans, and whites, which became public.

I wish Caruso luck in the election and even more luck if he wins.

I would like to give a hat-tip to pundit Don Surber for keeping an eye on this race and sharing the pearl from his recent post.

Imagine the magnitude of the Red Wave if it is large enough to strike Los Angeles.

Remember: every poll has an implicit and planned Democrat bias.

If they elect Bass they can look forward to MORE NYC style crime and an escalation of race politics.

As does every urban election

I’m calling that one a bridge too far.

If it happens, great, but if so I’ll take it as a surprise, thanks.

Never forget the GOP’s ability to choke, as well as voter fraud.

Both true. On the other hand though the r haven’t been close enough to choke away a victory in a while and as a result the d/prog ‘voter enhancement’ operation is probably atrophied a bit in deep blue areas. IOW when you’re used to winning by +15 there’s less need to find creative ways to win and less practice rolling these operations out. That might lead to some surprises but LA Mayor may be a too much of a long shot.

Caruso is running as a Democrat.

Yes, that’s correct, although technically the race is non-partisan, so no party ID will appear on the ballot.

This is very doable. Voter turnout is pathetically low in LA. All we would need is for Republicans (and disgruntled Democrats) to actually vote in less pathetic numbers for Caruso to win in a landslide.

That would be true in an off-cycle election, but I don’t think that will happen in a very hotly contested mid-term election.

makes it harder to steal races like this. Not that it won’t happen but there is a lot of explaining to do.

All Caruso needs to is show the price of gas in LA and pictures of Skid Row the play recordings of those racist city council members. That horrible woman and others didnt just go after “blacks, koreans and whites” They went after gays, Oaxicans as not the right colored Spanish people, Jews and others. The extreme racism of the Dem power brokers was laid bare.

True, but you start somewhere.