I wonder how long the next PM will last. 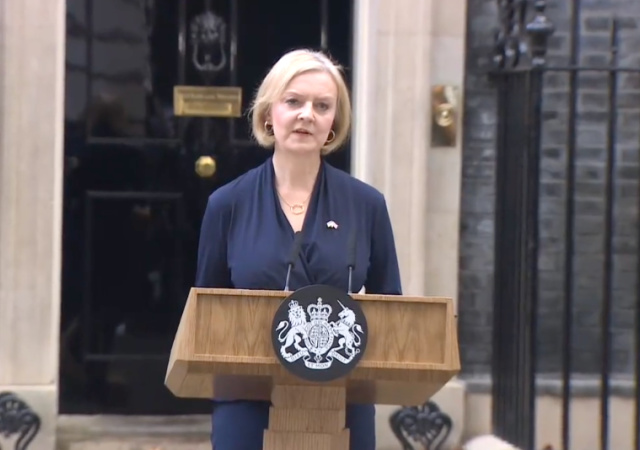 British Prime Minister Liz Truss announced her resignation after six weeks in office. She had the shortest tenure in British history:

She said: “I recognise though that given the situation, I cannot deliver the mandate on which I was elected by the Conservative Party.

“I have therefore spoken to His Majesty The King to notify him that I am resigning as leader of the Conservative Party.

“This morning I met the chairman of the 1922 Committee Sir Graham Brady. We have agreed that there will be a leadership election to be completed within the next week.

“This will ensure that we remain on a path to deliver our fiscal plans and maintain our countries economic stability and national security. I will remain as Prime Minister until a successor has been chosen.”

The 1922 Committee consists of all backbench Conservative Members of Parliament:

Dubbed “the men in grey suits”, the influential committee of backbenchers sets the rules for selecting and changing the Conservative Party’s leader.

If MPs want to get rid of their current leader, it’s “The 1922” that collect the votes to do so.

In order for Tory MPs to force a vote of no confidence and choose a new leader, 15% of MPs have to send a letter to Sir Graham.

Under the current rules, the PM is safe from a confidence vote for a year after entering office – but the rules could be changed.

Whether this happens is likely to depend on how many Tory MPs submit letters of no confidence in Truss’s leadership.

So it was a big deal when the chairman of the committee went to 10 Downing Street this morning.

The six weeks were filled with chaos. Thank you, BBC, for the summary:

The number of Tory MPs publicly calling for her resignation is now in double-digits, with an unconfirmed number of no-confidence letters delivered to Brady. The 1922 Committee is due to meet today.

It follows chaos in Parliament last night as Tory MPs tried to seek clarity on whether a vote on fracking was being treated as a confidence motion in the government. A Labour MP claimed to have seen “clear bullying and intimidation” to get Tory MPs to vote with the government.

The House of Commons speaker Lindsay Hoyle has since launched an investigation into reports of misconduct in the voting lobbies, reminding politicians to treat each other with respect.

Confusion reigned again as to whether the chief whip and her deputy had quit following the scenes last night. No 10 later clarified they were still in their roles.

But Home Secretary Suella Braverman was most definitely out, criticising Truss in a brutal resignation letter. Grant Shapps is in, with the UK’s third home secretary in eight weeks expressing his “great honour” to be appointed.

In response to the turmoil in the markets, Truss sacked him and agreed for new Chancellor Jeremy Hunt to scrap almost all tax cuts announced in the original budget.

This aimed to stabilise the economy – but the announcement that the energy price guarantee would be reigned in from April instead of lasting for two years led to further concerns that millions of families will struggle as the cost of living hits a 40-year high.

New chancellor Jeremy Hunt said he is not running for the position. He took over after Truss fired Kwasi Kwarteng over the outrage of their mini-budget.

How about Boris Johnson?

One person was elected by the British public with a manifesto and a mandate until January ‘25.
If Liz Truss is no longer PM there can be no coronation of previously failed candidates.

MPs must demand return of @BorisJohnson – if not it has to be leadership election or a GE.

Queen dies, Truss steps down. Biden decides to step down after a horrible midterm and hands the reigns to Obam….er, Harris.
Things get lit.

Dr Jill discusses with handlers, Hunter wants 39.35% and gets turned down. Hil “stumbles and falls” in a case of reverse Arkancide and Obama snickers.

Ha ha. I like that. Thanks for the chuckle.

I’m not very informed about British politics but it sure seems to me that Truss was either woefully unprepared for the job or would say anything to anybody to get the job. Whatever her plans were, empty promises were a major part of it. She certainly has no understanding of economics to have been so ill-prepared for the fallout of her first moves.

I wake up early just to binge on British politics! She came in blazing without thinking anything through. Unprepared for the job, unprepared for everything. She didn’t show up Wednesday for Questions for the PM in parliament. Just awful. Whining, ducking out of everything, etc.

She was supposed to be the Brexit PM but has been anything but.

It will be interesting to hear what Nigel Farage has to say about this. Failing in 45 days means she didn’t come in with her support lined up. If she did, she stabbed them in the back. Which is what I am reading.

Farage wants to form a new party. Because new parties are always winners.

I’m reading they stabbed her in the back.

So, a female Joe Biden, right?

If only we could rid of the pedophile so easily.

Not even close.
Fetterman is close.

I don’t really have an informed opinion of how well Ms Truss might have done in a less disastrous economic environment.

I do know that what she came in promoting, tax cuts and energy production, is the best solution. She was canned for a reason, the left is anti energy and for 100% tax rates, and they brought her down. The left includes most of Ms Trusts party.

“It’s simple”, said Joe Biden. “She tried to do the job herself. She should’ve done like me—be a puppet. Let handlers do the job and just come out occasionaly to read a few words off a teleprompter. Then go eat icecream.”

Joe Biden hasn’t said anything that sensible or coherent in his entire life.

50%, at least according to Hunter.

10% was the share Joe was going to get in the investment company that Hunter and his Chinese partners intended to establish; Trump heard that and somehow got the idea that Joe was getting a 10% cut on all Hunter’s takings. That made no sense, since the whole point of those payments was that they were bribes for Joe, with Hunter acting as bag man, so why would he give Hunter a 90% commission? 50% is generous but not outrageous, and that’s what Hunter told his daughter he was kicking back to his dad. Of course he was complaining about it, but his expectations were unreasonable.

Very confusing political system! How did Boris survive for so long?

Not confusing at all. It’s the same system Pelosi, McCarthy, Schumer, and McConnell depend on for their leadership. The House Dem caucus could dump Pelosi tomorrow morning, if it liked.

You’re right, it is a confusing system. Ms Truss was the leader of a country, one of the great ones, not the lesser leader of the house or senate. The most confusing thing is the mindset that allows the countries leader to be change every couple of months.

The King is the leader of the country. The Prime Minister is essentially a representative of the House of Commons. That’s the democratic element of the constitution. And the PM is merely the head of the government; not the government itself. The government is the entire cabinet, where the PM has only one vote. And the whole government is responsible to the House, which represents the people. So politically it’s the equivalent of Nancy Pelosi’s position; the majority of Democrats can throw her out whenever they like.

Absolutely as they brought her down.

Pelosi could be dumped the exact same way, any time her caucus decides to do so. So far it likes her.

1922 Committee. In 1922 Bonar Law became PM in Oct and failed badly enough to be ousted in May 1923. Britain has had short termers before and with a Parliamentary system can rid itself of one quickly without calling a general election. Regarding Joe Biden….if only.

I’m all for more than two party rule, but they have taken the crazy procedural nuttery to a whole new level.

It’s got nothing to do with the number of parties. The PM is elected the same way the Speaker is in the USA — by the majority party in the House. The House Dems could dump Pelosi tomorrow, and could then dump her replacement the day after.

The parties form a coalition to elect a successful PM…it is quite dizzying. And the PM in the UK has a good deal more power (particularly in executive function) than the Speaker of the House in the US.

There is no coalition. The Conservative Party has a solid majority. The UK rarely has coalition governments; those only happen on the rare occasion that no one party has a majority.

The office’s power is irrelevant here. The point is whom the person represents. The UK government represents the House of Commons; it is responsible to that house and only to that house. That makes it, and its head the PM, the political equivalent of Pelosi.

I think Glen Reynolds had the best take on this at Instapundit:

“If Boris Johnson really does come back in a “shock return,” I’m going to think the wily old bastard set this whole thing up. Letting his enemies tear themselves apart while he vacations in the Caribbean seems very Boris.”

I’m not up on my UK politics but if it’s like the dysfunctional Congress, my guess is they are not fully committed to Brexit. I’ll wager a half pence that there are politicians waiting to sabotage things.

Where is the WEF in all of this. Could this be something they are screwing with?

There is nothing like imminent national bankruptcy to take out a PM. The UK simply doesn’t have the latitude for the big giveaways she was proposing. The bond markets had a cow, and that was that. If the UK is going to continue to send all their gas to the EU to support the Ukraine war, there is going to be extreme hardship at home.

Tax cuts are not “giveaways”. Her policy seems correct; if you want to create more productivity you have to cut taxes. Of course you have to cut spending too, but cutting taxes is more important.

“The UK simply doesn’t have the latitude for the big giveaways she was proposing.”

What has the Brit’s in trouble, along with the rest of the west, is the mindset that thinks earnings belong to the government.

80 seat majority and the “Conservatives” have forgotten how to conservative

Truss seems to have been conservativing all right, but the markets crashed and her colleagues panicked.

Worth noting; Tory voters are not going to turn out for these clowns.

Liz Truss actually did try to do some conservative things (i.e. fracking) and was kicked out of office; the last decade has been tory rule that consisted of doing leftist things.

Leftist Tories will turn out to support their party but the party better hope there are no conservative Tory with rotten stories like this https://www.dailywire.com/news/hospital-cancels-sexual-assault-victims-critical-surgery-after-she-objected-to-transgender-nurse