Biden Border Crisis: Adult Males From Around The World Flood Across Southern Border

Biden Border Crisis: Adult Males From Around The World Flood Across Southern Border 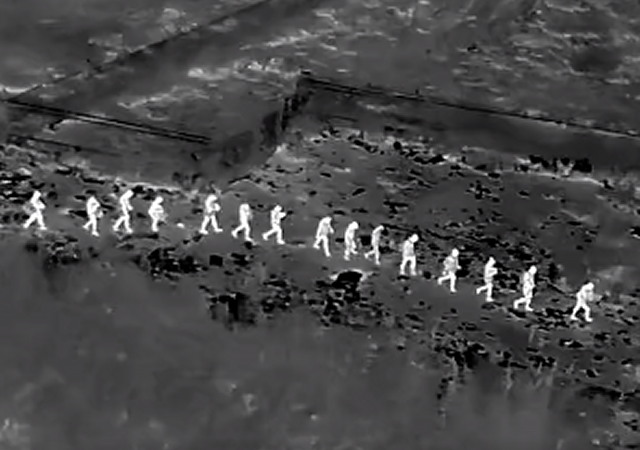 Take a look at this thermal imaging at the border from Bill Melugin. It sure looks like a lot of people just walking across our border. This is happening every day.

More video from our @FoxNews thermal drone showing hundreds of migrants crossing illegally into Eagle Pass, TX this morning. This was on the U.S. side, after they had already crossed the river.
We weren’t able to fly at night until we got this drone. Huge help/addition for us. pic.twitter.com/eX3MSqj1kx

According to this Fox News report, the vast majority of those illegally crossing our Southern border are single adult males:

The situation in Texas is so bad that the state is negotiating with private land owners to build more segments of border wall. This is not the job of the state of Texas.

The Texas Facilities Commission continues negotiating with private landowners for the rights to build segments of a state-funded border wall. Without these agreements, the state can’t move forward with building more segments of the wall.

The first 1.77-mile stretch of a state-funded wall was built on state-owned property in Starr county near the town of La Grulla.

During this meeting TFC dep. executive director, John Raff said they had closed or were in the process of closing a little over 2 and-a-half miles of easements for the Del Rio project.

Arizona put up their own border barriers too, and the Biden administration is telling them to take them down.

Republican-led Arizona has sued the Biden administration over a state-installed border barrier with Mexico, a major move meant to settle in court whether states have the legal authority to defend themselves absent federal help.

Gov. Doug Ducey (R-AZ) announced Friday afternoon that the state has filed a federal lawsuit in the U.S. District Court for the District of Arizona, asking a judge to intervene in its fight with Washington Democrats over less than a mile of shipping containers that the state installed on the border in August.

“Our border communities are overwhelmed by illegal activity as a result of the Biden administration’s failure to secure the southern border,” Ducey said in a statement.

The Biden administration isn’t quick to release the official numbers and only did so after others vowed to do it for them.

Several former border officials vowed to release the number of illegal migrant crossings into the U.S. by Tuesday if the Biden administration hasn’t by then.

The Trump-era officials pointed out that DHS Secretary Alejandro Mayorkas and CBP Commissioner Chris Magnus are required to release the numbers weekly and that if the numbers are not published by Tuesday, the former officials will do it themselves.

“Hiding these border numbers just adds to the ways Mayorkas and Magnus are failing to do their job and are turning their backs on the men and women of CBP and Americans to run interference for drug runners and human traffickers. American people deserve the truth. We’ll give it to them if the Biden Administration is not capable,” Cuccinelli told Fox News Digital in a statement.

ICYMI: The federal government dumped the September border numbers in an 11pm ET press release on Friday night.
Those numbers revealed the highest September migrant encounters in DHS history (227,000+), and nearly 2.4 million encounters to close out fiscal year ‘22.
🧵 below 👇🏻 https://t.co/aq2MhEH51I

The FY’22 September border numbers are more than quadruple the FY’19 numbers, which was the year Trump had his own surge at the border. @FoxNews

The border crisis is still happening.

More importantly, it is being allowed to happen.

Biden’s crime against humanity. He should be brought to the dock at The Hague. He deserves no less.

U.S. border security laxity and non-enforcement of immigration laws represent a calculated and willful policy choice by the vile Dumb-o-crats. They know exactly what they’re doing and they don’t give a damn if American citizens reap the deleterious consequences that predictably ensue.

“This is not the job of the state of Texas.”

But it should be… had the Supreme Court not disregarded the clear language of the Constitution in the Chinese Exclusion Cases, in favor of a ghostly emanation and/or penumbra of “sovereignty” that magically wafted from the person of King George onto a nonexistent “collective of the states” at the conclusion of the Revolutionary War.

The Constitution is quite clear. The fedguv has power over naturalization… not immigration. Indeed, one of the reasons it was given power to normalize naturalization is that it could not normalize the immigration practices of the states. And the BOR says that if a power is not named in the Constitution, the fedguv doesn’t have it… no matter how many dandy lawyers argue that that power is “really part of” some other enumerated power.

Not unless we also have supreme authority over the policies and actions that draw the illegals to this country – like federal and state welfare systems that reward illegal entry. Illegal entry wasn’t a big problem in Texas until LBJ and a Democrat Congress enacted a welfare system to do so and Democrat-run states followed suit.

Illegal entry is illegal entry, regardless of whose pelf attracted the illegal entrants. If a state wants to keep them out, they should have the power to do so. That’s what the constitution actually says, in the Tenth Amendment.

States retain sovereignty, and their borders are called out in detail in their state constitutions (at least the ones with a Mexican border). Why call out borders if your borders don’t belong to you?

Put our military bases on the border and have lots of rifle/pistol/machine gun practice, pointing south.

Never heard this before. Perhaps the down-voters could explain their objections.

1. What is the definition of “invasion”?
2. What can/will the U.S. government do with those now here?

Diversity is our greatest strength. Eliminate people who think that and problem solved.