Biden Admin Sending Troops From 25 States to the Southern Border, But Not To Stop Migrant Crossings

Biden Admin Sending Troops From 25 States to the Southern Border, But Not To Stop Migrant Crossings

Data revealed that a record number of migrants have died trying to cross the border this year. 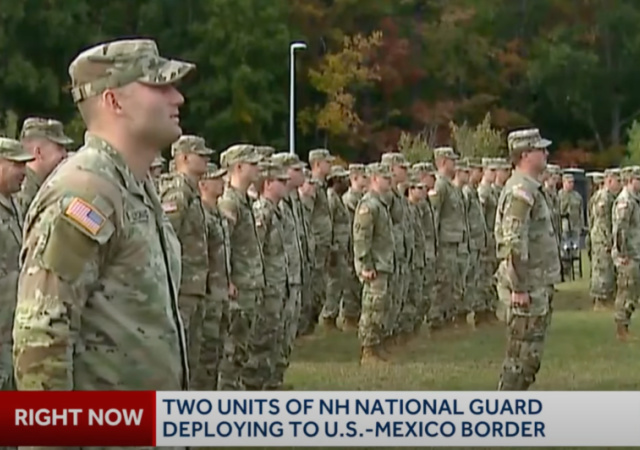 Weird how this news isn’t splattered across the media.

The Washington Examiner reported that President Joe Biden’s administration would send troops from 25 states and other territories to the border.

The troops already at the border will remain in place:

The decision by Washington to continue troop deployments, even at lower levels than during the Trump administration, indicates the White House is aware of the crisis at hand. Still, a show of force at the border with 2,500 troops is unlikely to satisfy Republicans who believe President Joe Biden is himself the cause of the surge.

Troops deployed over the past several weeks will remain in the four southern border states for 400 days, returning home around Thanksgiving next year. On the border, they will see firsthand what federal agents have experienced — more illegal immigrants arrested in Biden’s first 20 months in office than in former President Barack Obama’s entire two terms.

Only Congress can give the troops permission to enforce domestic laws via the Posse Comitatus Act of 1878:

The Department of Defense has developed directives to provide types of direct and indirect assistance to civilian law enforcement agencies. Currently, the military collects information and uses military equipment in tracking violators of the drug laws. Demands for greater military involvement in the war on drugs are being made. Military cooperation with civil law enforcement agencies can be expected to increase.

The National Guard usually does not have to follow that law. They have to in this situation since “they are deployed under Title 10 active-duty orders.”

The border is a catastrophe. A Fox News article revealed a record number of migrants have died while crossing the border during the fiscal year 2022:

The total number of migrant deaths at the U.S. southern border fiscal year 2022 total 856 – the highest and deadliest ever on record.

Good. Now let it be known that they will shoot to kill any person that looks (from 200 yards away) to be an adult male. Yes, I have known 13-yo boys to shoot up over night and get adult stature; yes this means that some teen boys will get shot. I am sorry for them, but we do no longer have the resources for niceties. Any women and children can be caught and immediately detained to a people-carrier aircraft and sent back to Mexico’s southern border when that plane is full. No stops at aid stations (they can get any first aid required on the plane), no shopping trips, no asylum requests anywhere but on that plane.

this is not immigration, this is an invasion. Full Stop.

Do this for 3 months and MOST border crossings will stop.

What makes you think they want the invasion to stop? This article’s title states the fact clearly…troops are being sent but NOT to stop border crossings.

I know… but I can dream?

Yeah, it’s just Kabuki theater from The Regime. They think we’re stupid enough to buy it.

They have no intention of stemming the tide and the flow of what they believe will be future Dem voters into the country. Nor does the GOPe — the more cheap labor the better.

What’s more is that they are ONLY doing it right next to the election. People aren’t this stupid in general unless they choose to be ignorant because of allegiance to their tribe.

Why are we spending money for the troops to do basically nothing?

That money would be better spent by resuming the border wall building.

This invasion makes our country responsible for the world, to some extent. And to the extent it erases borders and pushes American gov’t to be global gov’t, the better for them.

I wonder if it’s for some other, completely different reason, that has zero to do with immigration. Some of those states are nowhere near the border. And the timing of it is most suspicious as well.
We have an election – a most important election in just two weeks. Just spit-ballin’ here, but if you were this government and “thought” martial law might become necessary, you might just set something like this up. Things that make you go “Hmmm.”

this is not immigration, this is an invasion.
QFT

So it is a Biden band-aid on a national border hemorrhage?

Put all military bases on the border. Electric fences, hungry dogs, and perhaps introduce piranhas to the Rio Grande……

Dredge the Rio Grande so barges can travel up and down it. Bonus would be that it makes it more difficult to traverse without a boat.

Deep dredging of the river is a brilliant idea! Fail safe.

Brandon manufacturing campaign fodder for November 8. Let’s see how long the troops actually stay and what they are there to do.

So, military escort for the illegal immigrants. Sounds like a great idea and use of resources.

If they relieve CPB of the babysitting and administrative BS as well as fill in gaps just for observation then all that works to help CPB to be able to redirect personnel to apprehension and enforcement.

It’s not nothing. Finishing the damn wall along with this deployment would be far more effective. As would redirecting the funding for 87K IRS agents to CPB and ICE. An additional 37K personnel on the border with another 50K ICE personnel doing proactive interior enforcement would make short work of the current waves of illegal immigrants.

Deterrence works. Make it extremely difficult to cross then make it far more likely to be rounded up in the interior and deported then suddenly paying the cartel to go across isn’t such a gimme as is currently the case. Flag every illegal immigrant apprehended so that they can’t claim asylum, defer their sentence and incarceration and put them in lock up, no exceptions, if they try again. Send their kids to the Embassy or Consulate of their Nation to feed and house on site until their flight home. Close them down, revoke diplomatic status and send the Embassy personnel home if their govt refuses.

I just can’t stand this. I can’t endure thinking about this deliberate destruction of the country.

With this as in any especially Leftist government no doubt it’s not as it appears. At best its a quick pre election game, at worse its more welcoming committee to funnel illegals to Red states and make sure they go there.

Biden is activation NG (maybe Reserves), pulling them from their jobs and families, and sending them to the southern border to make a showing for the upcoming election.. Will he leave them there through Thanksgiving and Christmas?

How can anyone be OK with this?

I wonder how these troops and their families will be voting? I can’t see how anyone who is called up for this election thearer could even consider voting for his party. at any level [I would have included “dog catcher” in there but it would be disrespectful to them. ]

It would be interesting see how those “migrant” deaths compare to deaths of US citizens killed by these migrants once loosed on the population.

But we wouldn’t want to impeach Biden or Mayorkas over this. Not protecting the border, and essentially opening it up and letting millions cross illegally and disappear into the heartland is not a crime. It’s not like its a threat to national security or sovereignty or anything. And there are not the votes in the Senate. Nevermind it didn’t stop the Dems, twice. Why bother? The negative media coverage would hurt too much, or something. Nevermind it would place the issue front and center in the public eye for weeks, maybe months.

Right, GOPe? It’s just not who ‘we’ are. Right McCarthy? Right McConnell? Right Romney? And all the rest.

The GOPe….. Essentially McLellan Republicans. Same kind of ‘leadership’. The threat the Dems pose at the polls and through the media is always too great to take a chance and aggressively attack. Play defense and only slowly, cautiously, and incrementally try to advance and gain ground. Besides, the GOPe is very sympathetic to much of the Dems’ agenda and are largely on the Dems’ side anyway. Just get those taxes down a little, if possible.

The question is not whether they will protect our border, but what’s the schedule for the transvestite song and stip shows?

It is all kabuki since they will have no real duties to perform. many are students and their school work will be interrupted for no good reason. others have jobs that they can go back to by law but employers may very well never promote them or if they quit never rehire them or give them positive references. the employers may refuse to hire young people that might join the guard.

Only Congress can give the troops permission to enforce domestic laws
Well, if they were actually protecting our borders from invasion, I don’t see how that’s a “domestic law”.

One of the “few and defined” powers/responsibilities of FedGov is “to secure the borders” of this country. That is a FEDERAL mandate. Thus NG and any other military units can and should be depoyed to “secure the borders” against foreign invasion.

And if this madness is not an “invasion” what is it? It sure ain’t Romper Room or the Mickey Mouse Club Show.

You are wrong. The National Guard always has to follow the law. No one, not even the Federal Government, is above the law. Something that a lot of people in and out of government seems to have forgotten.