Lake: “That is absolutely absurd. And are you guys buying that? Are you really buying that? Because this sounds like a Jussie Smollett part 2.” 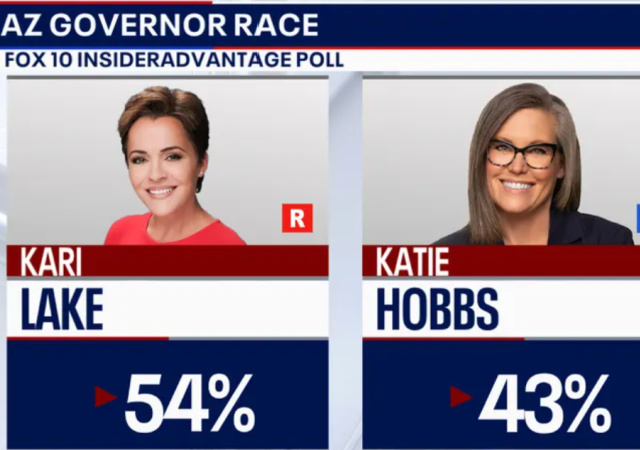 Desperation is never a good look.

How many times have I said that this week alone? Too many times, and it’s always directed at the Democrats.

Last night the @katiehobbs campaign gave me these photos from the break in. Police have just confirmed there was an arrest in the case, but have not released the identity of the person, so we are still choosing to blur these photos. @FOX10Phoenix pic.twitter.com/MmzMaj38y6

Hobbs is desperate because she is not doing well in the race.

Lake had a fantastic response.

Statement from our campaign on tonight's news: pic.twitter.com/OLqPMa5pYt

.@katiehobbs blames rhetoric from Lake campaign. @KariLake: “I can’t believe that she would blame my amazing people or blame me… I don’t even know where her campaign office is. I’m assuming it’s in a basement somewhere because that’s where she’s been campaigning”

You guys, it gets better.

The police made an arrest. They haven’t released any information, but now Hobbs does not want to talk about the incident.

AFTER accusing my team of coordinating a Watergate style break-in of her office, Katie Hobbs has now flip-flopped and DOES NOT want to talk about the crime

This comes AFTER arrest was made and NO political motivation confirmed. pic.twitter.com/lb7YAwl3eN

Katie Hobbs when asked about the campaign office burglary & what items were taken/if there’s reason to believe it was politically motivated:

She wouldn’t comment to us either. How hard is it to say something like “we’re happy there has been an arrest, we are now leaving the investigation to Phoenix PD.” Governors get asked questions about a variety of topics, no matter what event they’re attending. Don’t get it.

Next: Lake will be accused of spreading racist graffiti at ASU!! News at 11!!

I am only surprised that they didn’t try to clumsily Photoshop Lake’s face onto the alleged suspect’s head….

Hey Hobbs!! A great place to deal with this “campaign of lies and intimidation” would have been a debate.

Maybe it is me, but the goon that said “We’re not going to go beyond this statement at this time” at the end of the first video just reeked of “I am so unemployed soon.”

Neither of them had a good response, a result of 100% soap opera circumscribed as reportable news.

A good response would break out of that.

Trump broke out of it. That’s what the Don Rickles sense of humor was doing in the mean tweets.

Maybe you need to listen to them instead of just looking at them.

“I can’t tell the candidates apart.”

Then you are blind.

One is competent, and one is a Karen.

Good thing she didn’t debate her. They would have had to charge Lake with murder.

Probably an illegal immigrant looking for somewhere to sleep.

I was thinking a disgruntled Hobbs campaign worker.

Probably an illegal immigrant looking for somewhere to VOTE.

Actually, you nailed it. According to a CNN report (yeah, I know) the arrested perp explained he was cold and looking for somewhere to sleep. It was not known whether he was speaking of Hobbs’ campaign office or the other break-in for which he had already been arrested.

But, was it a third rate burglary?!?

Ah, the “burden” of evidence. While it’s not probable, it is plausible, and there are diverse precedents. Burn the witch! Cannibalize her profitable parts. Sequester her carbon ashes.

Shocking, but maybe not political at all….

My tinfoil hat is whispering to me that Katie doesn’t want to talk about it anymore because the alleged perp was one of her staff who had a key.

Nah, she just was watching TV and “All The President’s Men” was showing.

To all Momma’s, please let your daughters grow up to be like Kari Lake. She is very impressive!

Oops, turns out it was just a regular old professional burglar. How do those eggs taste, Katie??

Not that bad, once you get past the surrounding crow.

Is it served in a desperation flavored hat?

Hobbs is a joke. This is my top race. I’m interested in NY and Alaska in descending order. Nothing to vote for where I live.

There is nothing so desperate, disgusting, and disingenuous as a democrat in an election. Democrats are so low they have to look up at tick testicles…

And they are pervy enough to try…..

The alleged home invasion and assault with a hammer on Paul Pelosi just dropped this morning. Looks like both Hobbs and Pelosi are both identifying as Jussie Smollett.

I’d have thrown in that making snap judgements before the evidence is in is not a good way for a governor to be.

Or a president (beer summit).

With campaign dirty tricks being a reflexive and unabashed tactic in the Dumb-o-crat playbook, this “burglary” is most likely a false flag operation cooked up by harridan Hobbs’ campaign, in an effort to gain voter sympathy and to attack Lake.