The timing could not be worse, as crops are being harvested while water levels are at record lows. 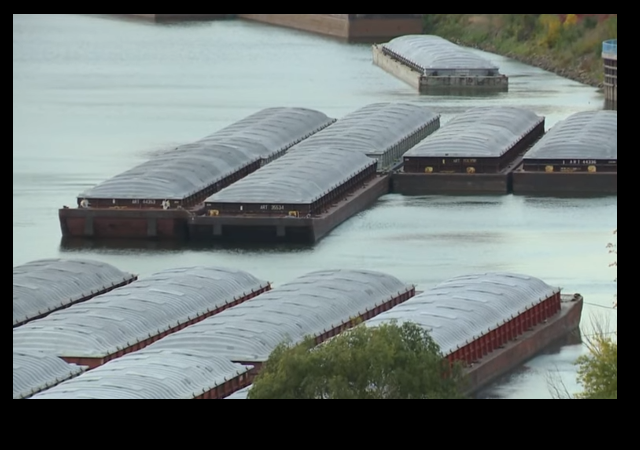 According to the US Corp of Engineers, the total value of domestic commerce that moved from Minneapolis to the mouth of the river was almost $70 billion in 2020.

The lowest water levels in the Mississippi River in a decade, caused by a severe Midwest drought, have closed the vital channel to barge traffic at a crucial time of the year for the transport of crops from the nation’s heartland.

The Army Corps of Engineers has been dredging portions of the river for the past week in an attempt to deepen channels and get barge traffic moving again. But the closures have caused a massive tie-up in the nation’s already struggling supply chains.

The low water has also been responsible for eight barges running aground during the last week, according to a report from the US Coast Guard.

As of Friday, the Coast Guard reports that there are 144 vessels and 2,253 barges queued up and waiting to get through two stretches of the river where traffic has been halted – one near Memphis, the other just north of Vicksburg, Mississippi. While the Coast Guard statement said it hopes to resume traffic again as soon as late Friday, it couldn’t say for certain when that would happen.

The timing could not be worse, as crops are harvested while water levels are at record lows.

Some Mississippi River communities between St. Louis and New Orleans may see record low water levels in the coming days, including Caruthersville, Missouri, and Osceola, Arkansas. The National Weather Service predicts the reading at Memphis, Tennessee, will reach its second-lowest level ever by Oct. 13.

The timing is bad. Corn and soybeans harvested in the early fall need to be moved, and barges are vital in getting the commodities from one place to another.

Officials with the U.S. Army Corps of Engineers said Thursday that normally, tows are able to move 36 barges at a time. With the water level so low, shippers have voluntarily agreed to cut that to 25 barges.

The result is likely to be even more inflation in food prices, as the inland barge system is an effective and efficient form of transportation. Transporters and food producers will have to find more expensive alternatives, which will be pricier due to escalating fuel costs.

Agriculture shippers for corn, soybeans, and wheat use barges as a cheaper alternative to trucks or rail to move their grain in bulk. Just under half (47%) of all grain is moved by barge, according to the USDA. Approximately 5.4 million barrels of crude and 35% of thermal coal are moved on the Mississippi.

“While the public and media generally understand that our economy depends upon viable international ocean shipping, trucking, and rail transportation, the essential role of our inland waterways is often overlooked,” said Peter Friedmann, executive director of the Agriculture Transportation Coalition. “Our members depend upon adequate water levels in the Mississippi River system, to reach domestic and international export markets.

“The low water disruption of the supply chain will be felt not only by our U.S. producers of food, farm, and fiber but also by U.S. and international consumers as well.”

Meanwhile, where is our erstwhile Secretary of Transportation, Pete Buttigieg? Doing the campaigning that the Democrats apparently don’t want Biden or Harris to do. He is on the campaign trail for November’s slate of Democratic candidates.

With invitations flowing into the White House and the Democratic National Committee, a relatively low-ranking Cabinet secretary’s staff has to choose between Democratic candidates trying to chase him down. There’s no precedent for this. But there’s also no precedent for the winner of the Iowa caucuses becoming Transportation secretary and proving more agile on camera than the vice president and Biden.

Other times, low water levels in the Mississippi have created challenges to domestic transportation. In 2012, a massive drought led to $35 billion in losses for the nation, and barge traffic on the river was halted on at least three occasions.

However, many other factors, including fertilizer supplies and fuel costs, will likely magnify the supply chain crisis this year. Here’s hoping for good rains, new representation, and better policies.

Cause: racism or climate change, take your pick.

Seriously, it’s all too easy to pin this particular problem on Climate Change. This one doesn’t have any political upside for us.

I’d love to spit some Beech-Nut in that dude’s eyes
And shoot him with my old .45

The COE is creating one way stretches on the River. On certain days, barge traffic can go down. On others it can only go up.

This allows traffic to stay to the deepest channel of the river.

I told them hippies that the “canoe lanes” they demanded were going to screw up everything.

I was trying to figure out how to approach this post, but the article it is taken from is a bs article, they fail to mention the fact that the Mississippi has 45 lock and dams that are supposed to maintain the water levels needed for barge traffic, the Mississippi being the Mississippi they need to dredge the river behind the dams to get rid of the silt that builds up in the channel that if the dams were not there would make it to New Orleans, but that is subject for another post. example look at lithographs of the Rock Island Illinois before the dam there was put in, they had bluffs of about 20 feet, not anymore. so if the barges are having issues it’s not because of the low water levels, it’s because the Army Corp of Engineers is not doing their job, what else is new, incompetence in the Biden Administration

Yeah, I wondered about the locks & dams, too… they have a certain degree of control over the water levels by regulating the amount of water using the sluices, I would think.

There aren’t any locks south of Illinois and the river just hit a record low at Memphis. It’s a real problem.

Perhaps the President could release a few gallons from the National Strategic Water Reserve to tide us over.

Orders are being sent to Fort Bibb as we speak.

Remember there was some idea to pipe water from the Mississippi over to the desert southwest to help with their drought?

Oops, guess that isn’t on.

Frakking MBAs cranking big math they don’t understand on a partial model captured in a spreadsheet. They’re worse than policy wonks who can’t algebra, let alone the hard stuff. Look, a number! From a compunter! It must be right.

Does nobody remember the Rand-fueled projections from the Vietnam war? WW-II US Army Air Corps projections that didn’t work. (They were successful after they adjusted tactics. Similar story with many platforms in that war.)

Rivers ebb as well as flow. Put that in your spreadsheet and crunch it.

Maybe some electric tow boats? With solar panels so the would not have to plug in dockside. That way the greenies can feel better knowing that there is no oil being used to keep their store shelves empty.