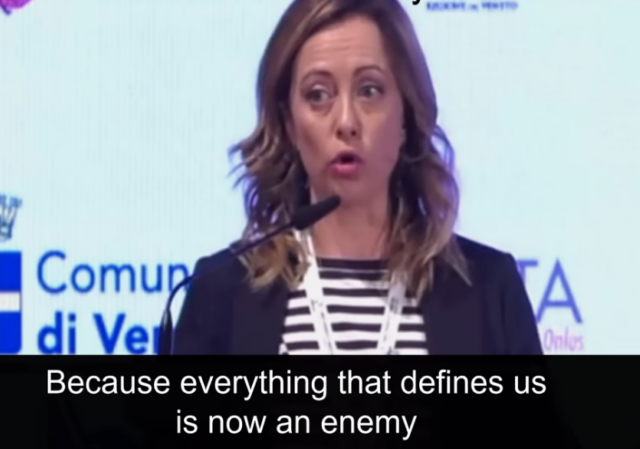 Giorgia Meloni is the incoming Prime Minister of Italy after her center-right coalition won the recent elections. While some people in the U.S. were familiar with her prior to it becoming apparent her coalition would win, by far the bulk of the Americans expressing opinions about her, particularly from the left, really didn’t know anything about her.

As they always do to anyone deemed even an inch to the right, the media has labeled her “fascist” and focuses on the “roots” of her political party in Mussolini’s fascism last century.

Can we talk about the “roots” of the Democratic Party in slavery, segregation, and Jim Crow?

This media caricature is disputed by people who know her, including a political rival:

"Personally I was against Georgia Meloni. I’m not her best friend. We are rivals but she is not a danger to democracy. The idea there is a risk of fascism in Italy is absolutely fake news." pic.twitter.com/8jt2jomQ1S

Italy’s new PM, Georgia Meloni, is not ‘far-right.’
If you think she is, you really need to brush up on your Nazi/Fascist history.
She’s what she says she is… centre-right. The left should stop calling every conservative opponent Nazis/Fascists. It’s so lazy. pic.twitter.com/4y3npmYpVA

David Harsanyi has a rundown of her positions which focus on populist concerns over the demise of Italian society, and cautions:

… anyone familiar with the left’s perfunctory use of “ultra-conservative,” “far-right,” “hard-right,” or “semi-fascist” to describe those who take positions to the right of the Democratic Party’s latest platform, should be skeptical.

Dan McLaughlin does a similar rundown, and notes:

For her part, Meloni said recently that Italy had “handed fascism over to history for decades now” and “unambiguously condemns the suppression of democracy and the ignominious anti-Jewish laws” of the 1940s, and she told the international media that her party, Brothers of Italy, now resembles more “the British Tories, the US Republicans and the Israeli Likud.”

The left hates her because they reflexively denigrate family, faith, and patriotism. All of these are bulwarks against government power, transnational finance, and the NGO-driven international monoculture. That just won’t do. There is no world but one and Klaus Schwab is its prophet.

I see people now doing oppo-research on her, digging back into decades’ old tweets and speeches trying to find snippets to use against her. We have seen that movie before.

What I know about her is this speech that went ultra-viral. It’s from 2019, and it lit up the internet in the past day:

I’ve never heard any politician so perfectly explain what we’re up against and why we fight.

When you watch this video, you’ll quickly realize why the establishment is afraid of her.
pic.twitter.com/CswR8o3mjg

The full speech linked by most people was available when I started typing this post: 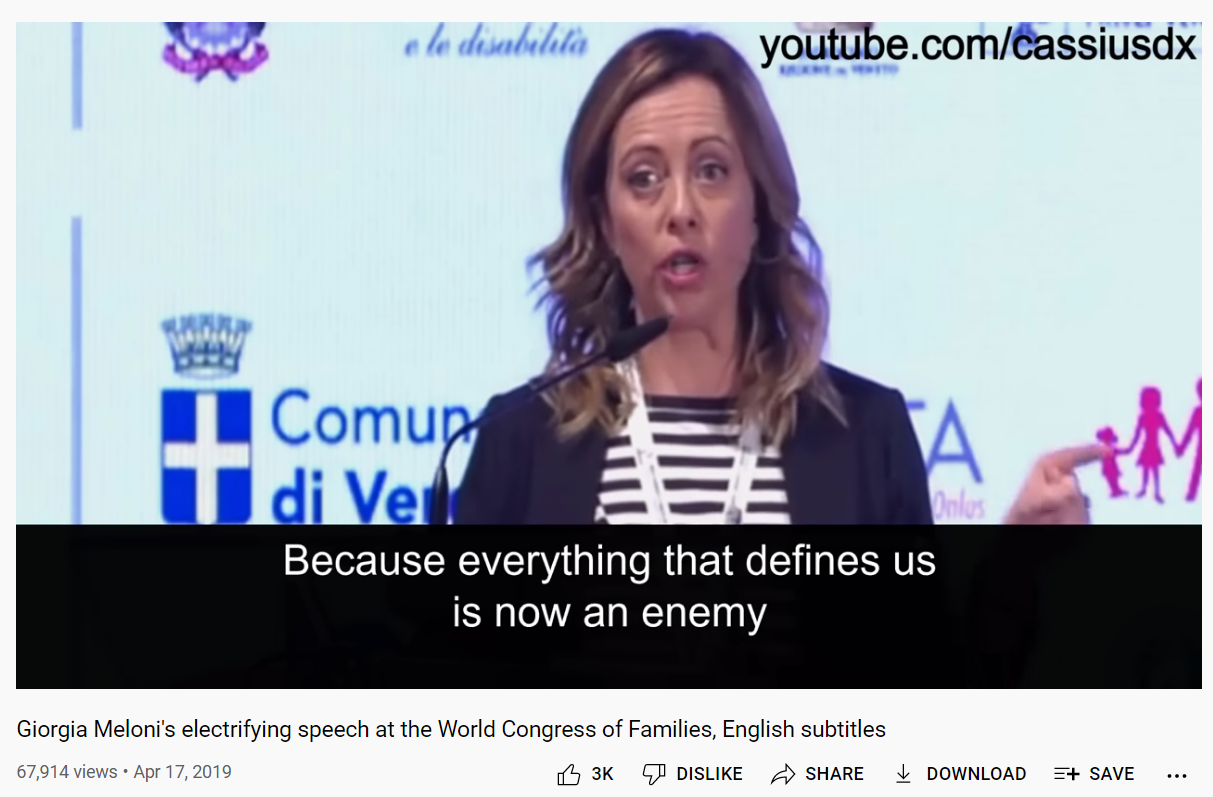 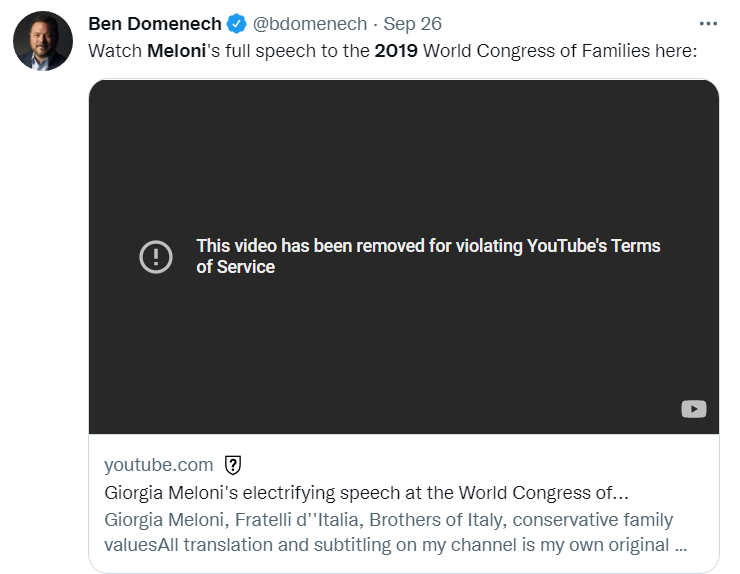 It’s still up in another location, but probably not for long:

(It’s available on Rumble. You also can click here if it disappears).

Censoring the incoming Prime Minister of Italy because you don’t like her positions even though the people of Italy did?

The Video has been restored by YouTube, which says it was removed in error. Via Reason:

After Reason asked YouTube to explain why it took down the video, the social media site reversed course and restored it.

“Upon careful review, we determined this video is not violative of our Community Guidelines and have reinstated it,” says Ivy Choi, a spokesperson for YouTube. “We enforce our policies regardless of the speaker’s political views and when it’s brought to our attention that a video has been mistakenly removed, we review the content and take appropriate action, including restoring the relevant videos or channels—as we have done with this video.”

It’s not clear why the video was flagged in the first place. It’s a recording of a speech made by Meloni at the 2019 World Congress of Families. In her remarks, she pushes back on the idea that her views are fringe or aligned with fascism.

Hope this results in some sturdy legislation from Italy in response.

Especially given that American politicians are not willing to defend the First Amendment.

We including Trump (who arrogantly told Tucker Carlson big tech censorship isn’t a problem when Tucker was blowing the whistle for him when we still had a chance to do something about it) supremely blew a golden opportunity 2017-2018.

However there are Republicans who have cast the “MUH GOVERNMENT BAAADD!!!!!!!!!!!!!!!!!!!!! MUH PRIVATE CORPORATION GOOOODDDDD!!!!!!” Bush era orthodoxy into the garbage can where it belongs (Ron DeSantis, Josh Hawley among others).

If their legislature is led by the likes of McConnell and McCarthy nothing will happen.

Incredible by YouTube.
To paraphrase: it’s not Giorgia Meloni, that they’re after, she’s just in the way.

I hope that between the Brits and Italy, this is the beginning of the end of the EU.

Indeed. A break in the armor of the United Socialist States of Europe.

What a surprise, since socialism has been working soooo well.

Of course, it take the eye of the real elephant in the room: the upcoming energy free (dare I say “green?”) winter.

*and by freedom we mean freedom from government

That is why Colonel Strasser told Captain Renault to shut her down.

No surprise. I just leaned about her the other day. When I did a search on her on google and DuckGoGo, I was getting very little. DuckGoGo a joke. Here is a clip from 2020 that is very good.

Duck is worthless since it came out the creator and owner is a full blown woke S.O.B.

Very true, but, it has a reputation as durable as Fox. Fox isn’t what many still think it is.

I use that, and StartPage.

Yes, very disappointing.
Suggestions on what to use now?

Cowardess and fear. The end is near for their reign of terror.

A beautiful speech, a powerful woman. It gave me goose bumps and hope.

I loved her speech! She said so many things that people actually think, but are afraid to say today. She will be a wonderful asset to Italy.

Meantime, I go to the sources that have what I want. The only boycotting I do is when I can get the same or better elsewhere. Proctor & Gamble, Chick Fil a, and several others come to mind.

Just don’t use YT for anything political, unless you like leftist only sreed.

The carburetor rebuild videos though, I am there.

I have never used them for anything political. The non-political ones vary from horrible to excellent. I got a lot of great pointers for my home automation, and the piano solo performances of BachScholar have launched my being able to stumble through several piano pieces.

Rumble needs content. I follow a few creators there, but until people create more videos to watch there it’s going to lag behind. And much of the content is political. Not many hobby vids, or music, or entertainment.

“Not many hobby vids, or music, or entertainment.”

There probably never will be.

And as many people have been pointing out all day all across twitter, there are plenty of speeches still on Youtube by ACTUAL dictators explicitly calling for violence.

I really hope the Italian government is paying attention.

Every Leftist run social media has a totalitarian streak they need to control anything against their side.
She has hit a nerve to she is going to get squashed like they did ti DJT.

Streak? It is like socialist quicksand for anything conservative.

Actually, YouTube is showing fine old traditional values. A woman’s place is in the home, and should not speak unless spoken to.

Giorgia should make YouTube an offer it can’t refuse.

Why, it is almost like the leftist media is reading the exact same talking points!!

I wonder who could be putting out their script?

Thank you for identifying Meloni as “center right” rather than–as do many conservative blogs–adopt the left’s description of “far right.” When they start calling Brandon a “far left socialist,” then they can call politicians like Meloni “far right.” Until then, the MSM needs to STFU.

I believe that the underlying purpose for removing such videos is to prevent people from hearing what she is actually saying. Then people are reliant on what they are told and cannot verify the truth.

Equating Fascism with being politically “far-right” is ignorant. Fascism is a form of Socialism and, in fact, far to the left. Unsurprisingly, more and more on the left are behaving like Fascists.
Meloni’s speech was, essentially, pro-civilization. Now we know, if we didn’t already, where YouTube stands on that issue.

If anything, YouTube’s action proves its management are themselves fascist tools of the ruling caste and need to be reined in. By now we should all understand the Newspeak phrase “Violating terms of service” means “wrong-think.”

Hiding what she says in order to substitute the approved narrative for the truth. That’s the way we must frame every instance of this sort of thing. When the regime and their allies deliberately conceal or obscure facts then our automatic response should to assume the worst until the truth comes out.

European Leftists/Globalists/Dumb-o-crats can’t proffer good ideas and they can’t claim to have provided their constituents sound, competent governance, so, instead they proffer epithets, slanders and vilification directed at their political opposition.

A-flippin-men! When was the last time they made a “mistake” that impacted Prog videos? My bet is never.