“We should have vaccine passports. I think that’s important.” 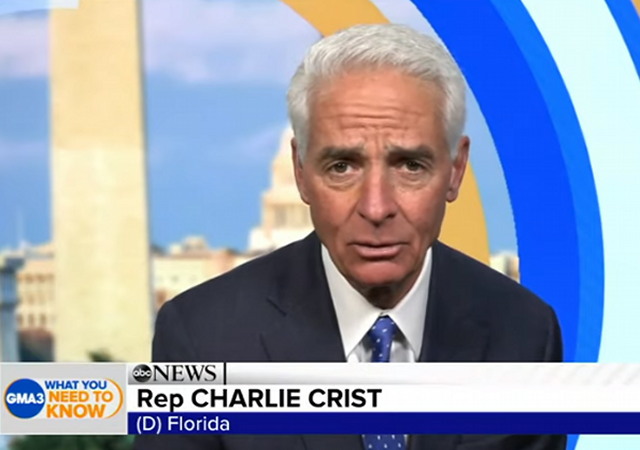 Charlie Crist, the former Republican Governor of Florida turned Democrat who is trying to get his old job back, apparently wants vaccine passports for Floridians.

A clip of Crist on Good Morning America in May resurfaced this week during an argument about another issue.

Crist tweeted this message about abortion:

It shouldn’t be controversial for women to have control over their own bodies.

Then came this response:

Charlie Crist: "We should have vaccine passports. I think that's important." pic.twitter.com/N7oujQAOj5

ANCHOR: “Congressman, you know, Governor DeSantis has also banned businesses from acquiring vaccine passports. And this obviously is going to have an impact on lots of businesses there in your state, including the cruise ship industry. Where do you stand on vaccine passports and businesses?”

CRIST: “We should have vaccine passports. I think that’s important. I met with some of the cruise line industry CEOs. And what they told me is that they don’t want to have a ship go out, you know, when we have three ports that really have an awful lot of cruise line industry, business jobs, etc. I mean, you know, if you talk about having 98% and you have 2% on the ship that are not vaccinated, you could suffer an outbreak. It would decimate the industry if that were to happen. I don’t know why the governor doesn’t believe in safety first, you know, I don’t get it. I really don’t. And that’s why I’m running against him.”

Here’s the extended version of the video:

Most Florida voters probably thought this was a settled issue.

It’s not clear why Crist thinks this could be a winning position.

There is something very wrong when this is the best the Democrats can do for a candidate for governor. And to think that he beat Freid in the primary. Where does she go from that? He also selected a running mate that is guaranteed to mobilize the Cuban community. Think about it. Think about their previous candidate for governor. What is wrong here?

Oh no! You could catch a cold on a cruise!

Unbelievable. Gestapo is alive and well, sorry off topic but WOW

Violation of the Nuremberg Code. = have take the experminental mRNA gene thereapy shot.

Remember how lucky we are Marco Rubio knocked him out.

Why not just stamp a swastika on his forehead? It would fit perfectly.

if you talk about having 98% and you have 2% on the ship that are not vaccinated, you could suffer an outbreak

This is nonsense on every level. The mRNA covid vaccines do not prevent transmission, making vaccination pointless in preventing outbreaks.

Nah. That video was carefully set aside in the editing dock for use against the first time that hypocrite opened his mouth.

Competent campaigning, like any Democrat would do, but apparently DeSantis is the only one who has a staff competent enough to jump on basic things like this.