Daily Telegraph: “Ukrainian soldiers have broken through Russia’s frontline along the Oskil River.” 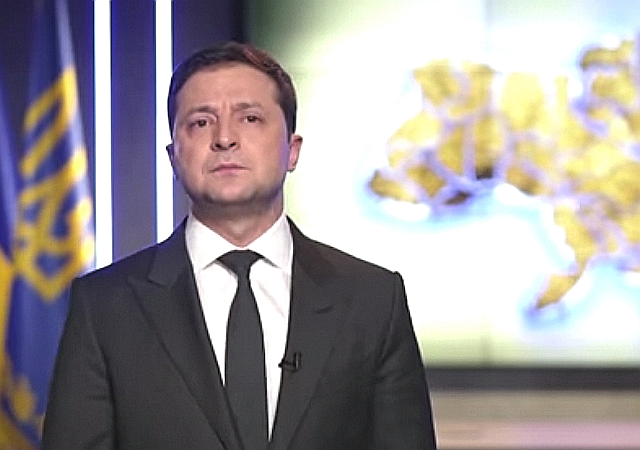 After more than two weeks of sustained counter-offensive, Ukrainian forces continue to retake ground in the east of the country.

Ukrainian military has reportedly breached the Russian front line along the Oskil River in the eastern Kharkiv region.

The sustained Ukrainian advance appears to have weakened Russia’s hold over the occupied Donbas area, which Moscow managed to capture after nearly seven months of bloody fighting. “Ukrainian soldiers have broken through Russia’s frontline along the Oskil River, exposing an important supply route and swathes of territory that the Kremlin has promised to defend,” the UK’s Daily Telegraph reported Friday.

Ukrainian forces continue to cross the key Oskil River in the Kharkiv region as they try to press on in a counteroffensive targeting Russian-occupied territory, according to the Washington-based Institute for the Study of War.

The Institute said in its Saturday report that satellite imagery it examined suggest that Ukrainian forces have crossed over to the east bank of the Oskil in Kupiansk, placing artillery there. The river, which flows south from Russia into Ukraine, had been a natural break in the newly emerged front lines since Ukraine launched its push about a week ago.

While the Ukrainians—replenished with recently-supplied Western arms—still have the initiative on the battlefield, the Russian forces are reportedly digging in to dampen their momentum.

The Russians are setting up a massive defensive line to retain their remaining hold on Kharkiv, the British media reports suggest.

“The Russians are making a stand at Svatove, as well as trying to regain their positions at Kremenna, because if they cannot, then Lysychansk and Severodonetsk could be surrounded from the north,” the Sky News UK reported.

Russian forces have also stepped up the frequency of their missile and artillery attacks across the front.

British intelligence confirmed the growing intensity of the Russian attacks but added that they were largely aimed at Ukraine’s civilians population. The agency disclosed that “in the last seven days Russia has increased it targeting of civilian infrastructure,” Sky News UK reported Sunday.

Russia’s defence ministry said on Saturday that its forces had launched strikes on Ukrainian positions in several parts of Ukraine, and accused Kyiv of carrying out shelling near the Zaporizhzhia nuclear power plant.

Russian forces conducted their strikes in the Kherson, Mykolaiv, Kharkiv and Donetsk regions, according to the ministry, which added that Ukrainian forces had carried out an unsuccessful offensive near Pravdyne in Kherson.

The Europeans are calling for a war crimes tribunal after hundreds of bodies were uncovered in mass graves outside the city of Izyum, which was recently retaken by Ukraine.

Earlier this week, more than 400 bodies were found buried in shallow graves. According to official Ukrainian sources, many corpses show signs of torture and had their hands tied behind their backs, suggesting they were executed.

Reporting from the scene, the German broadcaster DW News wrote on Sunday:

This is a site of sheer horror, of a mass burial of over 400 people who died violent deaths under Russian occupation in eastern Ukraine. Dozens of bodies have already been uncovered and moved to a makeshift morgue for further examination. But preliminary conclusions are grim: Most of the corpses show signs of torture.

The BBC reported the European demand for a probe:

The European Union presidency has called for an international tribunal over Russia’s invasion of Ukraine.

The call, from the Czech Republic which currently holds the rotating presidency of the bloc, came after the discovery of hundreds of graves in Izyum, a town recently liberated by Ukrainian troops.

Many are said to be civilians, women and children among them.

“We stand for the punishment of all war criminals,” Czech Foreign Minister Jan Lipavsky said.

One gets the feeling the Russians have bled themselves red in the Ukraine. Sure they can dig in but with what quality troops will those lines be held??

2 stupidly corrupt countries. I hope they bleed each other to insignificance.

Except Ukraines leaders are now billionaires, thanks to American citizens, not only the billions sent to keep their “benefits”, I almost died hearing that request,
It’s freaking War for God sakes, or so they tell us
Americans don’t have benefits, maybe they meant they needed billions period, for mansions and someone misunderstood .

Ten percent was the original agreement before his dad was POTUS. I think that by now it’s 50/50 because, as you know, his dad is the Really Big Guy.

Where do you think all those yachts taken from Russian billionaires will end up?

With Ukraine billionaires and a few left over for Hunter’s friends.

I wonder if the the Ukrainian breakthrough is like Germany’s Ardennes offensive in Dec. 1944 or the Allied breakthrough from the beaches of Normandy? Time will tell.

Please don’t equate Ukraine with the Beaches of Normandy

You miss the point. Is this a real breakthrough with reserves in the ready or is the last gasp dor Ukraine ?

Russian defensive lines tend to get grenades dropped on their trenches from small drones. That was one of the morale-lowering problems.

The more the better.

You folks do realize that Ukrainian corruption was at its peak while they were dominated by Russia, even had a leftover Soviet president.

I’ll judge them I. A few years. Perhaps they won’t improve, but maybe they will.

If Putinis not stopped, he would try to recreate the Soviet Union.

But they ignore the fact that there were a lot of Ukrainian KIA during Russia’s capture of Izyum in March.

I’m sure that happened, but you would have to believe Jussie Smollett was in Izyum for there to be ropes around the necks of some of the corpses.

We owe Ukraine everything it takes to win, since there is a straight line from our corrupt FBI (you think Ukraine is corrupt? Look in the mirror) suppressing the knowledge of the Biden crime family > swinging the election to Biden > cancelled Keystone ($ to Russia), pursued high energy price policy (to $ benefit of Russia), cancelled Nordstream 2 sanctions (benefit to Russia), plus Biden said before the invasion that a small incursion would be OK. With Biden’s incompetence on full display in our Afghan withdrawal Putin figured he’d have half of Ukraine before anyone could do anything about it. see cruz dot senate dot gov/newsroom/press-releases/sen-cruz-on-the-crisis-in-ukraine-president-biden-and-the-democrats-have-imperiled-ukraine-and-put-europe-on-the-brink-of-war

With the Wagner Group recruiting convicts and the Chechnya pigs near destroyed, Russia’s only chance is to send in a new army or a tactician to close the pincers on the Ukrainian’s eastern thrust. Remember this thrust was initially a mere feint, however as the Russian troops panicked, and the American artillery shells hit key positions time after time, including communication centers by radio location, it became a route. A deep thrust to near the Russian border. But one not sustainable unless the Ukraine plays its cards just right. Russia has a hundred thousand troop on both sides of the thrust…or so it says.

Maybe but the Western media has been widely unreliable on this war.

Perhaps Ukraine is mounting a successful attack and time will tell but I certainly don’t trust the media on this or just about any other subject.

One thing that has bothered me in this regard is the constant reporting that Russian casualties are far higher than Ukraine. That might be true as the attacking force often has higher casualties than that of entrenched defenders. However, we were also told that Russia was mostly fighting from a distance using their superior artillery and rockets to blast the Ukrainian defenders who lacked the weapons and ammunition to respond. If Russia was blasting Ukrainian defenses from long distance without an effective counter punch it wouldn’t make much sense that Russia was suffering higher losses.

Like election polls the reporting and/or propaganda about momentum etc. means nothing only who holds the ground when the fighting is done.

Ukraine is losing ground while Russia increased its attacks against the khokhols. Russia is actually gaining ground.

Don’t believe the war propaganda. Russia is using about 10 percent of its military army. Russia is patient. Winter is coming.

If Russia really is losing they might resort to nuclear attack next. My guess is they will launch a nuclear blitzkreig onto Ukrainian army positions all along the front, and big strikes on key sites inland, and then try to move the lines forward.

This civil war is none of the USA’s concern.

The USA should have stayed out of this and followed Pres Wash & Pres IKE’s advice!!!

And then what when Putin invades aother countries?