Meawhile, murder hornets are getting a new name, to avoid…..”evoking fear and xenophobia”. 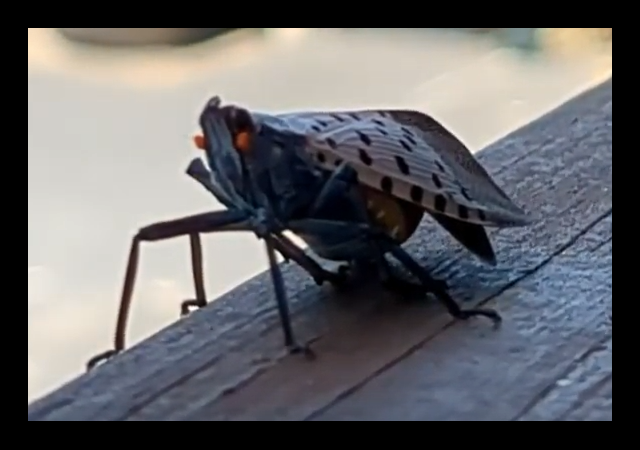 The US is now dealing with swarms of Asian Spotted Lanternflies, which have already spread to 14 states and are threatening crops.

The multi-colored bug, with spots on its back, is known to devour more than 70 types of fruits, trees and plants, leaving behind inch-long, putty-like egg masses and a sticky ‘honeydew’ resin often covered in toxic black mold that slowly weakens vegetation.

Pennsylvania was the first to detect a spotted lanternfly in 2014 and just five years later, the one-inch insect was found to cost the state $50.1 million annually – but a study warns it could soon reach $324 million.

New York is another going into battle against the tree-eating pests, as Senator Chuck Schumer secured $200 million in funds last month to contain the population that threatens the state’s $6.65 billion wine and grape industry.

The infestation along the east coast has become so intense, one Twitter user is likening it to the end of days in a tweet that reads: ‘This summer will be on the scope of a Plague of Egypt.’

Americans are sharing many inventive ways to deal with pests on social media.

This week, a woman in Staten Island used a vacuum cleaner to suck at least 80 pests off her grape vine. But a few hours later, the vine was infested again.

Another woman in New Jersey is feeding the insects to a giant spider that has made its home on her porch.

More and more photos and videos are being posted on social media of the potted lanternflies that continue to invade the country, as they litter the sidewalks, fall from trees and hitchhike on cars in 14 states across the eastern region of the US.

The economic impact of these pests was evaluated in 2019. They added to the fertilizer shortage and drought, and concerns about the effect on food availability and prices are heightened.

In 2019, an economic impact study estimated that if the Spotted Lanternfly population continued to grow uncontrolled, this insect alone would cause more than $324 million annually, along with costing more than 2,800 jobs.

Spotted Lanternflies are also known to excrete a sugary waste called honeydew. Honeydew attracts bees, wasps, and other insects and builds up on any surface that Spotted Lanternflies rest on. The build-up of honeydew has also been linked to the growth of sooty mold and black-colored fungi, both of which could decrease the quality of life of residents in impacted areas.

Meanwhile, I have an update on the “Murder Hornets,” which began nesting in the US in 2020. They are getting a new name, to avoid…..”evoking fear and xenophobia.”

When Asian giant hornets arrived in the Pacific Northwest in 2020, they were dubbed “murder hornets,” creating a media sensation.

But the coverage of the species—native to East Asia—and the nickname stoked fear among the public. Many native wasps were mistakenly killed and sales of hornet-killing pesticides jumped. And the moniker never made sense, since all hornets kill prey. For these and other reasons, scientists disliked the term and avoided it.

When the people dealing with the pest are more worried about names than containment, it suggests no serious solution is likely from “experts.”

So, put your pets to work.

Bones desperately trying to be a good New Yorker and murder a spotted lanternfly, thwarted by his age-old enemy, glass. pic.twitter.com/ICTB9qBVcB

Bill and Melinda hard at work !

The government must move quickly to provide these insects with free housing, medical care, basic income and drivers licenses.

They will, given the passage of time.

A X needs a Y like a lanternfly needs a driver’s license.

They already have all the rest of those things.

Yet another Asian plague.

In what unnamed Chinese city did these originate?

Beat me by 2 hours exactly.

Another excuse to spray us with another population controlling agent. If the wind mills were not killing all the birds maybe nature would take care of this.

Leslie, you do get all the really neat assignments it seems. A plague of Asian frogs can’t be far behind.

“… is known to devour more than 70 types of fruits, trees and plants, leaving behind inch-long, putty-like egg masses and a sticky ‘honeydew’ resin often covered in toxic black mold that slowly weakens vegetation.”

That may be the most frightening thing I’ve ever read.

Yeah, that’s a nightmare for anyone trying to maintain an orchard or produce nuts. Don’t seem to have spread too far south yet so that’s good news for pecan producers so far. Those trees need several years on them before they’ll even start producing so they are a long term investment. The black mold is really concerning though as that can really impact people’s health.

Thanks for yet more plague and pestilence, China.

Maybe the murder hornets can take out the lanternflies.

We need to kick everything Chinese out of the country now. The ONLY good thing to come out of China is Kung Pao Chicken. Okay, I’ll add Mongolian Beef to that.

Especially that Biden guy and the Swallwell fellow.

And maybe the entire Democrat Party, Chinese imports, all….

Amazing, absolutely amazing! Uncle Sam could fund Pfizer and Moderna to come up with a vaccine/cure for COVID in just about no time at all.
Asian Spotted Lanternflies (aka China hoppers) – well – that’s another story.

Poisoning dead trees is not a good idea. First, it will probably kill woodpeckers and other birds that feed on insect larva in dead wood. Second, the lanternfly is a true bug – it has sucking mouthparts. This almost certainly means it feeds on live trees and plants, and it’s just as likely its larva do too. (Also likely because if states are having an economic impact, it’s almost certainly due to damage done to live trees, not dead ones.).

I thought the bugs were liberals.

Don’t worry, you were just murdered by the tolerant, multi-gender inclusion hornet!

Why do we US citizens have to depend on a UK newspaper to tell us which US states are suffering pestilence? Chewbacca defense!

It just occurred to me that the reason that Biblical Revelation starts with plagues and pestilences may not be because God sends them at all, but because the swamp is playing with its The Science™ toys to control the free people.

“Many native wasps were mistakenly killed and sales of hornet-”