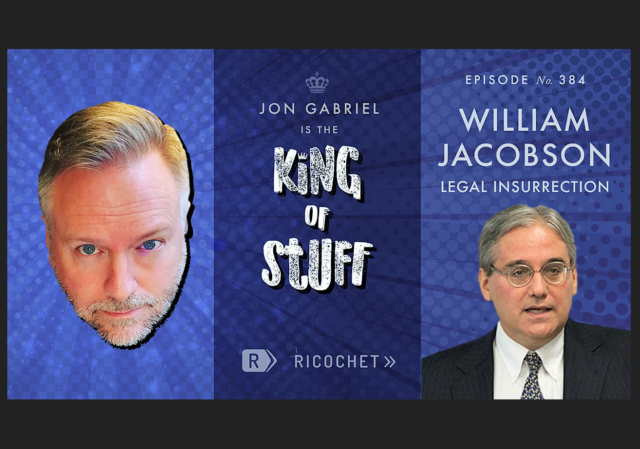 Professor Jacobson appeared on the Jon Gabriel podcast this week to discuss a number of issues including the FBI raid on Mar-a-Lago and Biden’s divisive speech in Philadelphia.

You may know Gabriel as Exjon from Twitter. His podcast moniker is the ‘King of Stuff.’

Here’s the description of the episode from Ricochet:

The king welcomes William A. Jacobson, the founder of Legal Insurrection, to discuss “special masters,” the FBI’s raid-not-raid of Trump’s Mar-a-Lago home, and the dark omens surrounding Biden’s Philadelphia speech. William Jacobson is a law professor and Director of the Securities Law Clinic at Cornell Law School. Professor Jacobson is frequently quoted in the media on political and legal topics, has authored many op-eds in major publications, and appears on television and radio to discuss politics and the law.

Here’s part of their exchange on the special master.

GABRIEL: I’m not up on the special master stuff. What the heck is a special master and uh, what is the significance? Because it’s something that Trump’s legal team asked for it and everybody in the press says what a moron, what an idiot. There’s no chance. And then immediately it was granted. So why don’t you explain what this is exactly.

PROFESSOR JACOBSON: A special master is not uncommon. It’s not in every case, but where the court has an issue typically regarding privilege or some document production issue. And the judge doesn’t wanna spend all her time doing this and reviewing documents. I mean, the judge has other things to do so sometimes they will appoint, uh, a magistrate judge. And in fact, in this case, a magistrate judge issued the warrant or approve the warrant and may even be the special master. We don’t know, but a special master is typically somebody who’s hired by the court to oversee these sticky issues of privilege and things like that. The concept being that somebody who’s neutral has to review it. And so the special master is just someone hired specially for this case as a, an arm of the court.

Here’s part of the exchange on Biden’s speech.

GABRIEL: Um, the other thing that has been big in the news, and I know you’ve written about it, I’ve written about it is this bizarre and it kind of pairs well is like a month after the rate on Mar-a-Lago. Now you have Joe Biden talking about super ultra extreme MAGA semi-fascists, um, which at sometimes he says, oh no, I’m only talking elected officials and only a tiny amount of Republicans. Another time, basically anyone to the right of Joe Biden is this week is, uh, this threat to democracy. You had this, um, the red wedding speech where he’s, you know, gloom around him and red lighting.

And he’s yelling at Americans and saying that, uh, basically we’re at war with people, people who disagree with me who was very bizarre to see, um, lots of people on the left and, and kind of the non-committed, you know, the, the semi-celebrity who leans left was like, what the heck was up with that staging? But does it say more than just Joe Biden is a desperate politician, who’s screaming the equivalent of he’s gonna put y’all back in chains and he says, I gotta give this dire scary speech? So we don’t get completely destroyed in the midterms or gosh, with a FBI raid on Mar-a-Lago and so forth? It just makes me nervous that something more is coming or he would love to provoke something more.

PROFESSOR JACOBSON: Yeah, I think it’s all of the above. I think my first takeaway is that this is the real Joe Biden, and you just mentioned putting people back in chains. I think that comment was made vis-a-vie Romney. Okay. So when he says he’s only against MAGA Republicans, of course that’s a lie because he, you know, attacked Romney viciously. He is known as the father of Borking, meaning the vicious attacks on Judge Robert Bork to keep him off the Supreme Court. Joe Biden has been a flame thrower and a nasty piece of work, his entire political career. He was repackaged in 2020 as kind grandfatherly Joe Biden, but that was a complete fabrication.

So what you’re seeing now is Joe Biden’s real nature coming out. And what we saw was really, I think at a whole other level, I mean, certainly Trump calls people names, people call Trump names, politicians call each other. But this was a full blown attack on tens of millions of voters in really demonic and dehumanizing terms. I mean his punchline or one of his punchlines is that MAGA Republicans, and I’m just reading it now, thrive on chaos. They live not in the light of truth, but in the shadow of lies. I mean, this is the sort of talk that you would expect in a country where a political power or a dictator is getting ready to purge people, is getting ready to ethnically cleanse people. This is not normal talk.

It’s a great conversation and worth your time to listen:

Anybody else remember Nancy Pelosi calling grandmas in tennis shoes terrorists? How about the way True the Vote has been treated, all along?

Biden only did this now because he knew he could get away with it. There was a time when most nominal Democratic voters would have been repulsed by this and the newsies would have been loudly appalled.

The problem is Donald Trump gave us a taste of good government policy, and cut off the gravy train. There is money at stake, here.

A very, very long time ago.

I was going to add:

It has also been a long time since we had a republican party that stood against the marxist left. The end of that time came just after after President Reagan. Effectively, when the Reagan presidency was done the republican party merged with the democrats, and they both took a hard left turn.

Still surprised the FBI hasn’t leaked what they stole from Mar-A-Lago yet, especially the mundane other hand that was idiotic and nothing to report..
More than likely the information is hurting the Deep State otherwise it would have gotten out.

The ink is still wet.

Reportedly about 1% of the documents seized were in the FBI raid were ‘confidential’, secret’, or ‘top secret’. Just over 100 documents out of over 11,000 IIRC.

I’m wondering why the 99% of documents and items not covered by the warrant haven’t been returned yet.

Joe’s “Reichstag” speech was chilling and unAmerican. His background setting was ugly enough but having two active duty Marines in the background changed his address from political policy speech by candidate Biden to a speech given in his position as Commander-in-Chief of the armed forces. He selected his target.

Joe’s version of Homeland Security (we really need to get rid of the Patriot Act) has labeled Libertarians as among the most threatening group to Democracy. I do believe Joe meant more than “extreme Trumpies” in his speech. Anyone who does not occasionally cooperate with the Democrats (McConnell) is an enemy of the state.

I have discussed with my tailor the location and fabric for the yellow M that will soon be required on the outer garments of all MAGA republicans. A thorough phrenological study, including measurements of one’s maxillary-mandibular relationship will root out all those trying to evade compliance. Thus do they know the face of evil.

We are under president Zhou Baideng (周拜鄧–Joe who worships Deng [of 06/04/89 infamy]). It’s intresting how the Left, which so loudly decries “dhumanization” is quick to throw around terms like “fascist insect” at its opponents and doubters.

Yes. And they’re about to purge people. The end goal of leftism is genocide. We Americans are about to witness hell. Get ready.

The appointment of douchebags to high places has consequences.