Sen. Mazie Hirono: This is ‘Literally a Call to Arms’ to Fight the Pro-Life Movement

Sen. Mazie Hirono: This is ‘Literally a Call to Arms’ to Fight the Pro-Life Movement

“…it doesn’t even go far enough to call them out on what they’re doing.” 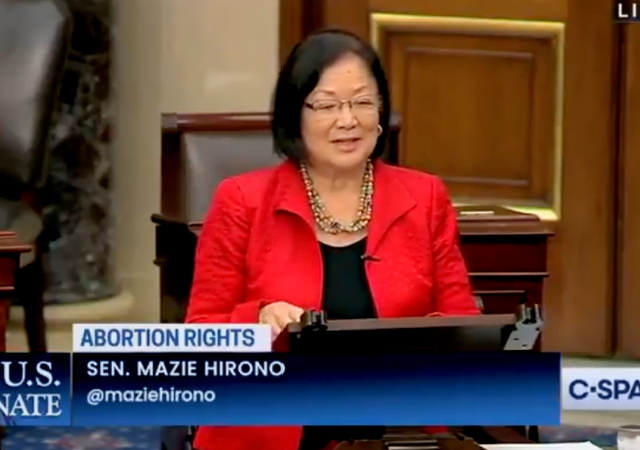 I thought we weren’t supposed to use this kind of rhetoric.

Oh, wait. You can when you want to stop the murder of unborn human beings and a Democrat:

HIRONO: “Talk about government overreach. When I hear my colleagues talking about how it should be states’ rights or government should not be telling us what to do, the word ‘hypocrites,’ it doesn’t even go far enough to call them out on what they’re doing. This is an outright attack on women in this country. That is how I see it. That is how more and more women and those who support our right to make decisions about our own bodies, that is how we see it. And why? Because that’s what’s happening. Madam President, I yield the floor. But clearly, this is a — literally call to arms in our country. I yield the floor.”

Sen. @maziehirono: Fighting the pro-life movement "is literally a call to arms in our country." pic.twitter.com/JCtAwMpzE1

The January 6 Committee tried to misconstrue a tweet from President Donald Trump as a “call to arms.” All he promised was a “wild” time at the rally that happened before the riots:

“Big protest in D.C. on January 6th. Be there, will be wild!” Trump wrote.

“When Donald Trump sent out his tweet, he became the first president to call for a crowd to descend on the capital city to block the constitutional transfer of power,” [Rep. James] Raskin said.

Phil Reynolds, a member of the GOP central committee in California’s Santa Clara County, appeared to urge on insurrectionists on social media during the Jan. 6 attack, declaring on Facebook: “The war has begun. Citizens take arms! Drumroll please….. Civil War or No Civil War?”

The heightened rhetoric mimics language far-right extremists and white supremacists have used for years, and it follows a year of civil unrest over the killing of George Floyd, a Black man, by a white police officer and its links to systemic racism. Some leftists have used similar language, which Republicans have likened to advocating a new civil war.

Didn’t the Democrats lash out at Sen. Lindsey Graham when he said there would be “riots in the street” if Trump is prosecuted? Yes. Yes, they did.

Will the “conservatives” at The Bulwark take issue with Hirono? Mona Charen said the Republicans are rooting for civil war.

Poor Crazy Mazie, she’s so fucking stupid that she just can’t stop the diarrhea from spewing out of her mouth.

I can’t wrap my head around being so dedicated to killing the unborn that that is the take up arms point.

Actually, I’m amazed that we aren’t already in a shooting war in this country given the mess of the Cold Civil War we’re already in.

Like you I am so stupefied as to the blood lust for the unborn. You might even think it’s demonic.

While lots of examples could be given Eliz, Warren is a stand-out, representing as a proxy this ghoulish behavior,

Simply because we choose life, the left is enraged.

She is an idiot.

Find out which village she has gone missing from and ship her back there.

I don’t have room to talk. I come from the state that gave the world Pelosi. I’m still trying to work that out.

Republicans aim to lose an election that would be easy to win, so that they can be right on a principle that they’re not even right on.

Perhaps if women and men, girls and boys, possessed neither dignity nor agency, a civilized society could tolerate the wicked solution, and the progressive commoditization of human life.

There is always the 1-2 compromise, but surely there is no existential threat to delay reconciliation this time. Unfortunately, to paraphrase WaPo: demos-cracy is indeed aborted in darkness (i.e. murder). That said, 6 weeks to baby meets granny under law, and state of physiology, if not in process.

So Senator Hirohito, who was born in Hiroshima, can call for violence, but the rest of us are “threats to democracy.” Do I have that about right?

I don’t know why Graham is introducing this bill, given that the Dobbs decision returned the regulation of abortions to state legislatures. Why, it’s almost as if he’s giving the Democrats an issue (federal legislation) to mobilize their voters on purpose, but that can ‘t be [/sarc].

Graham is just throwing gas on a fire that is nearly out of control, why give the opposing party something to run on. He can’t be too stupid to know that a bill that does what he wants would never get sixty votes in the senate. Even if the found a way to get it through Congress there is no way that Biden would sign such a bill and then find enough votes to override a veto.
It’s almost like he wants to make it as difficult as possible to win back Congress.

I’ve been wrong before, but I think the plan is to force democrats to go on record to oppose the bill since it reflects what the vast majority of the civilized world acceptable to certain limits

The problem with that is the media and the ads won’t go into specifics.

They will just talk about a woman’s right to choose and how republicans want force 10 year old rape victims to have babies and die in child birth.

Hey now. Those liver donors knew what they were getting into when they signed the card.

Asinine? Some “well-respected” compilations of “human rights” [1, 2] say that everyone has a “right” to housing, work, and food. We’re already past asinine, into suicidal.

But we are going to need to ramp up production on new technology lightweight, rapid deployment guillotines

Behold the modern Democrat party: the party of death and violence.

Democrats: Party of satan
And they don’t even try to hide it

Well, he was a liar and murderer from the beginning, so they are following in their father’s footsteps.

In fairness, she doesn’t know what “literally” means.

I wonder what Miss Lindsay received in return for introducing a bill that is designed to fail while giving his palz across the aisle a huge favor 6 weeks before an election.

Slavery, diversity [dogma], and a wicked solution, a final solution, where the “burdens” of evidence are sacrificed, cannibalized, and sequestered. That said, keep women affordable, available, and taxable, and underage girls rape… rape-raped in darkness for the sake of social progress. An Ass does not stop braying.

“Control of our bodies” may exist, but it does not begin with a positive pregnancy test. Pregnancy is preventable.

Dems are on the wrong side of this and pound the table about it.

They are willing to fight for removal of the death penalty because life is so precious that murderers should live forever, but they are also willing to fight for the right to terminate innocent lives once a fetus is clearly a living entity (with clear scientific evidence and a working nervous system to ignore).

A call to arms? She’s calling planned parenthood to slaughter more babies so they can steal their arms? Sick woman.
How the heck did this country produce so many really dumba** idiots who believed this piece of schiff was worth voting into office.
Turnips have higher IQ’s than her.

The left seems to think there will be no consequences from engaging in this kind of rhetoric, especially for them.

Who would be the most likely to obey orders from a rogue government to spy and report on, or actually cause harm to one’s neighbors, and assist moving them to the “re-education” camps?

A pro-life patriot, or someone who sees no intrinsic value in human life and supports murdering healthy babies at term?

I find it impossible to trust the latter in any manner or domain.

I’m sick as **** hearing about how I want to control a woman’s body. I could care less about your body. What I care about is some, SOME, women’s claimed right to destroy an entirely separate human being.

Ladies, let me be blunt. Fuck all you want. Don’t make the child suffer. I hope, professor, you let this stand. I am approaching the anniversary of losing the only child I’ll probably ever have. God, I wish that child lived. I think when it comes to abortion I get a vote.

How come all of a sudden I need a uterus to have an opinion? Trans rights are human rights, right?

It’s simply necessary to appreciate the distinction, maintained by Democrat’s, between what in their view is free, fair, and civil speech, say Rep Tom Ryan’s “kill and confront the MAGA movement,” or Sen Mazie Horono’s articulated belief that the recent USSC decision in Hobbs, being, a direct attack on women’s freedom to do as they please with their own bodies (sic), is a “‘literal’ call to arms,” on the one hand, and riot-inducing, hate-promoting, insurrectionist and thus constitutionally unprotected speech, none of it actually violence-inciting, spoken by Republicans, on the other hand — except for Sen Lindsey Graham’s awful locution the other day regarding a possible Trump indictment’s definitely leading to riots; it has all the trappings of a threat and, while most know what he actually meant and did, they know also how stupidly he expressed himself in that apparent exhortation and fair warning to stop the 1/6 Sovietesque madness, before it’s socially and politically too late for our teetering constitutional republic and its social fabric.
No matter, you see, a Republican’s motives are NEVER benign, well-meaning, and good for democracy in the current set of video lenses, audio filters, and other key ideological implements employed for the current, pathetic manner of public discourse.