Second Artemis I Launch Scrubbed After Another Leak Discovered

Second Artemis I Launch Scrubbed After Another Leak Discovered

This mission already seems to have all the wrong stuff. 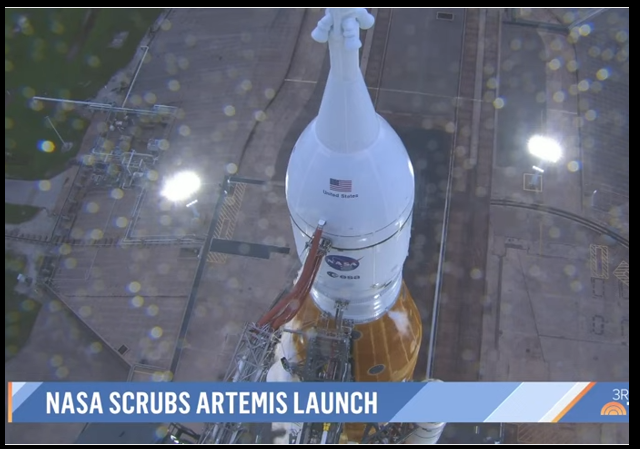 The second launch attempt for the NASA Artemis I rocket was scrubbed a hydrogen leak was discovered.

The team then started to work to de-tank the rocket.

Launch controllers were unable to troubleshoot a hydrogen leak – which was detected at 7:15 a.m. EDT – that reoccurred twice in a cavity between the ground and flight side plates of a quick disconnect.

Engineers had attempted to reseat the seal in the quick disconnect cavity where the leak occurred by applying pressure to it with helium.

The #Artemis I mission to the Moon has been postponed. Teams attempted to fix an issue related to a leak in the hardware transferring fuel into the rocket, but were unsuccessful. Join NASA leaders later today for a news conference. Check for updates: https://t.co/6LVDrA1toy pic.twitter.com/LgXnjCy40u

A new launch date will be announced shortly, according to reports.

NASA will likely set the new, third attempt, at launch for either Monday or Tuesday.

It’s yet another setback to mark NASA’s return to the moon, more than 50 years after the Apollo program.

The ambitious Artemis program, a NASA partnership with SpaceX and the space agencies of Europe, Japan, and Canada, eventually aims to establish a lunar base as a stepping stone to interplanetary space missions.

The Artemis 1 rocket is the largest and most powerful ever built by NASA. This test flight is part of the Artemis program, which to return astronauts to the moon by 2025. This mission is an uncrewed test of the Space Launch System and its Orion spacecraft to make sure both vehicles are safe for astronauts.

The mission also is designed with “diversity-equity-inclusion” in mind.

Artemis 2 will see astronauts lifting off from Kennedy Space Center for the first time since Apollo – the crew will leave Earth’s orbit and travel beyond the far side of the moon.

Artemis 3 is when NASA aims to land on the moon’s surface.

Artemis 3 also aims to send the first woman and the first person of color to the surface of the moon.

Perhaps NASA should take the two failures as a sign that the focus should be on practical engineering rather than political science and social justice.

This mission already seems to have all the wrong stuff.

Delay the launch; focus on the mission. Politics has no place in engineering.

Your lips to God’s ears. Of course if politics were not the way it is, this could have been built and launched successfully a long time ago and people would be building a base on Mars already. Despite the political problems imposed on NASA by dysfunctional politics I really hope this rocket program is successful.

All NASA is is politics. Forget the DIE stuff; what possible reason is there to go to the Moon, or anywhere else in the solar system? Nothing NASA does has any Constitutional justification now that the Space Force exists. NASA exists to keep a lot of federal money flowing into Texas and Florida and that’s it. It’s yet another bloated federal program with no purpose that exists to keep a lot of iron rice bowls full.

“NASA exists to keep a lot of federal money flowing into Texas and Florida and that’s it.”

Wow, looks like standards at NASA have gone way downhill since I was a kid and we routinely launched shuttles and satellites. Too many woke retards is my guess.

Actually, it’s been like this for a long long time. The only reason we didn’t notice it is that until recently they had an enforced monopoly, and there WERE no private space organizations routinely showing the government posers up.

Sort of like what happened when UPS and Fedex won the right to carry documents without having to also put postage stamps on them.

Maybe they should have outsourced the project to Elon Musk.

This is why right answers are important.

I will believe a successful launch after I see it. And I note that with the fuel that they are using [ liquid hydrogen] and the connections, every time you have to fuel and then de-fuel, it weakens the seals.

But it will be politically correct, for the moment at least until new protected classes are discovered.

They should’ve scrubbed Biden before they launched him into the presidency.

Artemis 3 also aims to send the first woman and the first person of color to the surface of the moon.

Sorry, I got carried away there.

Another leak? Our space program’s run by the DoJ now?

Duct tape has always worked for me.

the first female in that job

And Bill Nelson heading NASA doesn’t exactly inspire confidence. He talks like he would have a tough time reading a children’s book out loud

Anything that automatically changes your words without asking you is evil and you should turn it off.

This is a colossal waste of money that is way late, way over budget and very very expensive compared to the private sector. But to our bought and paid for politicians it’s a very useful jobs program, It gets them good publicity when they bring jobs to their area, gets more publicity when it launches and let’s them collect more lobbying money (bribes) from the contractors.

A Historic First! The Moon Conquered by Affirmative Action! They’re going to light it up in the colors of the rainbow!

How do I get my money back?

Then when somebody’s piercings breach their spacesuit and there is a tragedy, the fedguv will ban all future space travel for public health reasons. Just you watch. It’s the same model policy they use on guns.

Our Space program, going to the moon inspired millions to the sciences, all endeavors of mankind

I very much want it to be successful

It won’t with woke politics

“Our Space program, going to the moon inspired millions”

NASA just contracted with SpaceX for deliveries to the ISS: *we* can go to the moon. I’m feeling inspired.

Darth Brandon just declared the quiet part out loud: only through us, only with us, only within the govt he heads. So, we’ll go to the moon, and they can keep leaking. That seems to be what they’re good at.

Modern engineering of conventional technology in the woke of social progress.

The last time NASA had a chance to get back on track was when Mike Griffen was Administrator during W. Constellation could have been successful but Trayvon’s dad destroyed it and it never recovered.

Going back to the moon is so stupid. NASA’s plan to use the moon as a launching point for Mars is just stupid.

They are launching a massive rocket to carry two little ships to the moon (one in orbit and one lander). I’ve been to the Kennedy Space Center. It’s cool walking under the Saturn V rocket they have there but when you get to the end and you see the two little vehicles for the astronauts you’re gobsmacked by the need for a huge rocket to lift essentially a minivan and a truck (in terms of size) to the moon.

Launch the the ship parts into space using this rocket so we can have a bigger ship. Assemble them and than fly to Mars. At least on Mars you can make oxygen for breathing and for fuel to get off Mars. We already are doing it as a test on Perseverance Mars Rover.

Unless there is something on the moon that we need to get our hands on we should only send probes there. Otherwise everything should be working on getting to Mars.

SpaceX is launching, on average, every 6 days.