Ultimate power move sending them to the liberal hideout. 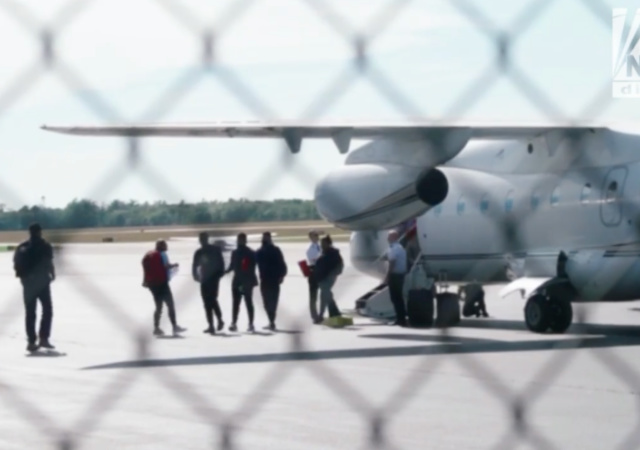 “States like Massachusetts, New York, and California will better facilitate the care of these individuals who they have invited into our country’ by incentivizing illegal immigration through their designation as ‘sanctuary states’ and support for the Biden Administration’s open border policies,” she said.

The Clintons. The Obamas. The Kennedys. Roll Call even published an article explaining why Martha Vineyard is the “Permanent Democratic Summer White House.”

The Obamas threw a birthday party for Baracj’s 60th birthday last year in Martha’s Vineyard. Because the left doesn’t count, the Obamas thought they could throw this big birthday party as others were forced to scale back their family gatherings. They invited all the stars: Oprah, the Clooneys, Steven Spielberg. The Obamas cut the list only after people called out their hypocrisy.

Underrated aspect of Martha’s Vineyard meltdown today: The funding for transporting illegal aliens to sanctuary jurisdictions was a highlight of the budget @GovRonDeSantis signed MONTHS ago. Dem legislators performing outrage today voted for it 🤡

The significance of the PR value of this action will not be lost with the passage of time.

It’s hard to get out of your head.

It sure is racing in circles in her head.

Plenty of room too…..

I hope the islanders enjoy their new guests. I understand that these freshly arrived cosmopolites prefer their Rob Roys very, very dry.

Martha’s Vinyardeers will be salivating over new maids and landscapers.

And little kids to diddle.

When I grow up, I want to be like Ron Desantis.

Wondering why no red governor has as much as an Uber to Delaware yet.

Delaware is not one of the 11 “Sanctuary States”

The messaging is even more effective when you call out the hypocrisy at its most vulnerable point.

Well, neither are Texas or Arizona. I live in one of those, Biden lives in Delaware. Just sayin’.

You make a fair point, too.

Too bad he didn’t do it two months ago when all of the “important people” were still there.

Don’t worry, there are still plenty of people there who don’t like coming into contact with icky commoners.

But that means their mansions are empty and useable!!

I can think of one ocean side estate outside Edgartown that could likely accommodate a plane full.

Well, at least until the rising ocean inundates it….

I can see it now!

What are the squatter’s rights laws in Massachusetts?

Was thinking the same thing. The year round population of MV is around 20,000 most of whom are long time residents and not rich liberals. They support the infrastructure of the island that allows the population to swell by 10x in the summer months.

It would have been more effective had he done it a month ago.

Martha’s Vineyard is not all Obama’s and other American royalty. Plenty of plain folk, and tribal lands there with problems and poverty. They don’t need more problems.

Well, none of us do. I am sure those border towns feel a bit overwhelmed.

Everyone needs skin in the game to make the problem a topic of discussion/action. Can’t wait for the laughably biased media to do it.

Abbot just dropped 100 on the steps of The VP residence in DC. Capital Police called for more guards so our Border Czar protects herself but not our country. Make it so they cant ignore what is going on

If so, won’t this highlight the inequality perpetuated by limousine liberals?

“Plenty of plain folk, and tribal lands there with problems and poverty. They don’t need more problems.”

And yet they steadfastly vote for Democrats. It’s a puzzlement. And a teaching opportunity.

Maybe they should declare themselves as illegals, and tap some of that sweet sanctuary gravy!

They voted in the politicians who made it a sanctuary location for illegals. That’s easy to do when you don’t have to directly deal with the consequences of illegal immigration. The people of Florida and Texas don’t have a lot of sympathy for them.

Yes, just like Texas and the rest of us.

I don’t think this strategy will really work out long term. In the end we’re still facilitating the movement of Illegal Aliens inland instead of sending them back home, and the open borders crowd isn’t going to change their minds because their local enforcers had to crack a few skulls to shoo some of them off to the nearest out of sight spot.

That’s true, but there will be no ‘send them back home’. So this is the next best thing. Maybe Red states can send some virtue signaling signs for people’s yards.

If enough heads get cracked, maybe they will write home and say “don’t come.”

And they wandered in /
From the city of St. John /
Without a dime /
Wearing coats that shined /
Both red and green /
Colors from their sunny island /
From their boats of iron /
They looked upon the promised land /
Where surely life was sweet /
On the rising tide /
To New York City /
Did they ride into the street /

See the glory /
Of the royal scam /

Now the tale is told /
By the old man back home /
He reads the letter /
How they are paid in gold /
Just to babble in the back room /
All night and waste their time /
And they wandered in /
From the city of St. John without a dime /

See the glory /
Of the royal scam.

That depends on the exact “strategy”

No, moving a fraction of a percent of illegals around is no physical gain or benefit at all.

HOWEVER, both the PR value and showing “resistance” and actually DOING something ( combined with the left not liking it) can and will pay dividends both long and short term

You will note that the “showing resistance” is “bi-partisan”. The border state Republican governors are actually doing something, while the GOPe is trying as much as the Democrats to pretend there is no problem with the foreign invasion. It reveals that the split is not as much Democrat -v- Republican as it is Rulers -v- The American People.

Our son always ends his texts with LOL or LMAO and my wife and I often debate whether or not he did, indeed, LOL or LMAO.

When I saw this post I literally did LOL and LMAO!!

That and forcing them to actually demonstrate the virtue they claim. It’s all fun and games to put a welcome sign for illegal immigrants when they are flooding into TX. It’s quite another when dark blue progressive enclaves are confronted with the reality of these folks on their own doorstep.

Or as the leftist saint Alinsky said :

I think DeSantis has it covered on this one move.
May there be others….

This is quite the opposite of hurting. Send them to these lefty wealthy enclaves where we know the lefties will welcome the illegals with open arms and open pocketbooks. Right? I mean, the left is true to their mouths, right? The illegals will get such good care and love from the lefties.

Portland (OR), Seattle and SanFran are still open for business, although it might be too cruel to send them to feces coated SanFran….

I’m surprised. I didn’t think there were any immigrants left.

Mayor Eric Adams sent a “Fact Finding Commission”to Texas and found that only a handful of “immigrants” crossed the border and Texas sent all of them to NYC.

After all, the “border is secure” dontcha’ know?

Why LI bustin’ on Barack’s birthday party. Everyone knows they were all sophisticated.

They’re just getting shipped off to the south shore and Boston, areas that already have exploding immigrant populations. Other than pissing on Obama’s birthday parade and forcing Democrats to admit in some fashion that the wanton relocation of illegal immigrants is dangerous and stupid (worthy pursuits as they are) I fail to see the point.

The point is that you never, repeat, never heard about the illegal alien invasion until these wise Republican governors made this necessary move.

Now we are getting data about ethereal, unnamed “political messages” and actual footage of Dem governors making fools of themselves, whining about our overtaxed (pun intended) cities with only a few thousand bussed illegals and how “evils” Abbott and DeSantis are. Even Biden had to make an erroneous statement. Even that Karine hack had to lie about the issue, which she(?) probably would have preferred to avoid (like everything else).

I actually saw footage of El Paso’s streets, where they admitted to the town getting up to 1500 immigrants A DAY. Compare that to the sanctuary cities now being forced to cash the check their mouths wrote.

Love it! DeSantis and Abbott giving them a taste of what it’s like to live with this! Here and at Kamala’s place! Just perfect!

They look well fed, clean with new clothes, and the FJB “goodie” bags. Plenty of freebie vouchers and prepaid cellphone.

It’s a short walk out of town to The Lightbringer’s, they have plenty of room in the shoreline mansion.

Sorry, hit downvote by accident. No way to cancel a vote.

No worries, done the same…ctually upvoted a guy who downvoted me (why, I have no idea but it takes all kinds).

This is hilarious as the Vineyard-ees whine, fully failing to see their hypocrisy. Wait until one the the new “residents” opens a Tamale stand out front of Black Dog. Tucker had a great review last night. This is the best revenge, force the Lefty’s into their own demand of others, see how they like it.

Right now there is a rich liberal woman calling 911 to report that she just saw a Hispanic man without a leaf blower.

The media keeps saying they are being used as “political pawn” to send a “political message.”

Oddly enough, they never say what that message is….