READ: Our Opposition To Biden’s Plan to Gut Campus Due Process and Free Speech, and Impose Gender Ideology

READ: Our Opposition To Biden’s Plan to Gut Campus Due Process and Free Speech, and Impose Gender Ideology

Legal Insurrection Foundation files comment letter: “we oppose the Department’s (a) efforts to gut due process protections for persons accused of sexual harassment, (b) threats to free speech posed by dramatic expansion of its definition of harassment, and (c) imposition of gender identity ideology into Title IX, in a way that would undermine the statute’s language, purpose, and goals of providing equal opportunities to women.”

The Obama Administration eviscerated due process protections during school adjudications of sexual harassment claims. The Trump Administration restored them (rather late in the game), but now the Biden Administration is moving to gut them all over again. Under its 190-page proposed rulemaking, published July 12, 2022, the DOE plans to water down rights to have a live hearing and cross-examine opposing witnesses, uses a reduced proof standard (preponderance standard), and otherwise makes basic rights toothless.

Of even greater concern are Team Biden’s proposed substantive expansions of its role in forcing its gender ideology down the throats of every school that receives Title IX funding, in violation of the First Amendment. First, DOE plans to expand its mandate to cover something it calls “sex-based harassment.” The current regulations don’t define sexual harassment; the definition is taken from caselaw. The current rulemaking proposes to re-write the rules to replace sexual harassment with sex-based discrimination:

34 CFR § 106.2 Definitions… Sex-based harassment prohibited by this part means sexual harassment, harassment on the bases described in § 106.10, and other conduct on the basis of sex…

Furthermore, the proposal would force schools to classify sexes based on how people “identify” rather than on biology. In other words, the federal government is taking sides in ongoing disputes over how people using hormones and possibly surgery to simulate a sex other than the one into which they were born should be treated. Should a transgender athlete who went through puberty as a boy be allowed to compete on a women’s sports team? Should someone with a penis and testicles be allowed into the women’s locker room? Bathroom? And vice-versa.

Between the vagueness and overbreadth of the “definition” and the weakened due process protections, we at Legal Insurrection fear schools will define criticism of current gender ideology as “harassment” (as if schools needed any encouragement in that department). 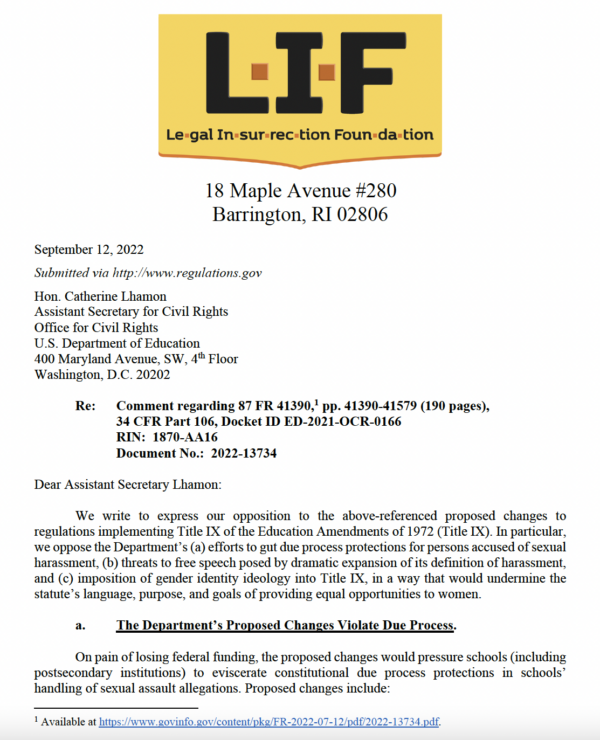 Comments to the proposed rulemaking were due by September 12, 2022. Legal Insurrection Foundation filed a comment letter. Here are some of its highlights:

We write to express our opposition to the above-referenced proposed changes to regulations implementing Title IX of the Education Amendments of 1972 (Title IX). In particular, we oppose the Department’s (a) efforts to gut due process protections for persons accused of sexual harassment, (b) threats to free speech posed by dramatic expansion of its definition of harassment, and (c) imposition of gender identity ideology into Title IX, in a way that would undermine the statute’s language, purpose, and goals of providing equal opportunities to women.

a. The Department’s Proposed Changes Violate Due Process.

On pain of losing federal funding, the proposed changes would pressure schools (including postsecondary institutions) to eviscerate constitutional due process protections in schools’ handling of sexual assault allegations. Proposed changes include:

(a) Undercutting confrontation rights by:

i. Eliminating the current requirement that a school must provide for a live hearing with cross-examination.

iii. Requiring that the judge pre-screen all questions.

iv. Letting schools employ an inquisitorial system in which the accused’s representative is not allowed to ask any questions of the witnesses against or for the accused; instead, the judge asks the questions.

(b) Undercutting the judge’s independence and objectivity. In the proposed system, the judge can be the Title IX coordinator, despite that person’s likely institutional bias for complainants and against the accused. Essentially, a college bureaucrat paid to advocate for Title IX would be able to serve as judge and jury against people accused of violating Title IX. As the current notice observes: “In 2020, the Department said it was concerned that combining the investigative and adjudicative functions in a single entity raised an unnecessary risk of bias that unjustly impacts one or both parties in Title IX grievance procedures. 85 FR 30367–69.” That prior reasoning was sound. Combining the roles is a bad idea that invites systemic bias against the accused.

(c) Weakening the proof standard. With some exceptions, the proposed new rules require schools to use a preponderance of evidence standard in adjudicating what are essentially criminal charges, with high stakes for the accused such as potentially being branded a rapist and expelled from college…

b. The Department’s Dramatic Expansion of the Definition of Harassment Poses a Serious Threat to Free Speech.

The Department’s attempt to expand the scope of sexual harassment by renaming it “sex-based” harassment is so broad that it threatens free speech. The proposal itself recognizes its expansive goal:

… the scope of sex-based harassment includes bases that were not expressly covered under the term ‘‘sexual harassment’’ in current § 106.30(a), including harassment based on sex stereotypes, sex characteristics, pregnancy or related conditions, sexual orientation, and gender identity…

The proposed regulations would expand that definition to include:

(2) unwelcome sex-based conduct that is sufficiently severe or pervasive, that, based on the totality of the circumstances and evaluated subjectively and objectively, denies or limits a person’s ability to participate in or benefit from the recipient’s education program or activity (i.e., creates a hostile environment);…

The proposed rulemaking’s excessively broad expansion of “training” also suggests viewpoint discrimination. Current regulations mandate how-to guidance for those directly involved in overseeing Title IX (i.e., Title IX coordinators, investigators, and decision-makers) on the definition of sexual harassment in § 106.30, as well as in how to conduct an investigation, grievance process, and other basics. The proposed regulations try to leverage “training” into a “require[ment] that all employees be trained on the recipient’s obligation to address sex discrimination in its education program or activity, [and] the scope of conduct that constitutes sex discrimination, including the proposed definition of ‘‘sex-based harassment.” The language suggests that the Department’s actual goal is to impose its own ideology of what it deems proper sexual relationships and sexual conduct on schools.

Our organization, Legal Insurrection Foundation, regularly tracks speech suppression at American universities, as well is in primary and secondary schools. Much of it is premised on the idea that there is only one acceptable opinion about matters, such as gender identity, and that even voicing a different opinion qualifies as “harassment” or creates a “hostile environment.” Notwithstanding the proposed rulemaking’s assertion that the proposed revision is consistent with the First Amendment, the Biden Administration’s decision to extend Title IX regulation to matters of opinion, and to expand its analysis to include subjective evaluation, exponentially increase the danger that speech protected by the First Amendment will be suppressed.

It is far outside the scope of the U.S. Department of Education’s mandate to force the current administration’s ideological viewpoint about “gender identity” on schools, in the absence of legislative authority and, frankly, in contradiction to the principles of Title IX itself. Nevertheless, the current proposal tries to do just that. It demands that schools treat persons claiming to “identify” as a boy/man or girl/woman regardless of physiology, based on how they claim to “feel”:

a recipient must not carry out any otherwise permissible different treatment or separation on the basis of sex in a way that would cause more than de minimis harm, including by adopting a policy or engaging in a practice that prevents a person from participating in an education program or activity consistent with their gender identity;

The well-publicized case of Lia Thomas, formerly known as Will Thomas, demonstrates the soundness of this policy. Thomas has the body of a man, even the body of a male athlete who went through puberty as a man and competed on a men’s college swim team. The additional size and muscle mass give Thomas an unfair advantage in competing against biological women. Title IX no more requires the University of Pennsylvania to permit Thomas to compete on its women’s swim team than it would require the school to let any male student compete on any of its women’s teams.

Congress may in the future explore expanding Title IX to require separate opportunities for transgender individuals, or to require schools to provide separate bathrooms for them. That would be expensive and burdensome, and in our view would not be appropriate for DOE to order without Congressional authorization, under the major question doctrine.

The only real solution that will stick is when the DOE is eliminated entirely.

This is an excellent comment on a constitutionally dubious rule

“No Justice No Sleep!” Mike Lindell

Appreciate your efforts but I doubt if anything will be achieved other than a few commas inserted or removed. This nation has become a government by, for and of the pedophiles, and nothing other than their total annihilation will overturn their rule.

All this stuff should be thrown out. If there’s rape or sexual assault, those are crimes and the police can handle it. Otherwise, it’s not a crime and not the school’s business.

If they want to have a policy that nothing can be sex based, bathrooms are unisex, and everyone’s pronouns are ze, zir, fine. That’s an institutional decision and students can decide if that attracts or repels them when deciding where to go to college.

A large majority of students of both sexes wants the traditional way. That’s why they seek to impose this top-down; it would never survive in the free market of ideas.

OT Sad to see Ron Coleman going all conspiracy on Twitter by pushing the idea that Biden will find some reason to stop the 2022 elections. Seriously, he went there earlier today and when I pointed out no court would allow that he basically laughed.

“all conspiracy”?
“No court would allow that”?

This is your first day on this planet right? Clueless.

Hardly. They’ll allow any amount of fraud in an “election”, e.g. 2020, but they will hold an “election”. We’ve always done it, the Soviet Union even did it. You always hold the election. Then you can claim it was “free and fair” (was it accurate though?) do things like gaslighting people who notice the obvious fraud. If you don’t even hold it, then it’s harder for the government to maintain control.