“The Democratic Governors Association poured over a million dollars into the Oregon governor’s race last week, its largest contribution yet in the state.” 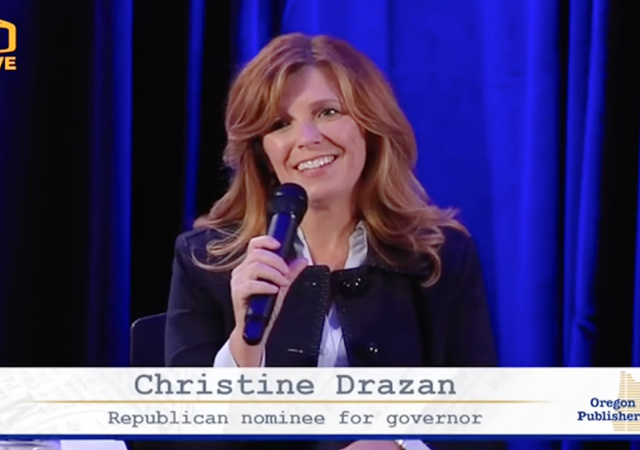 Now that the Oregon governor race has been moved from Leans Dem to Toss Up, panicked Democrats are throwing some big money at the contest.

It’s impressive that this race is so close, but it just shows how tired people are of the status quo.

The Democratic Governors Association poured over a million dollars into the Oregon governor’s race last week, its largest contribution yet in the state.

The Association on Thursday contributed $1.25 million to Democratic candidate Tina Kotek, the Willamette Week reported, bringing the group’s total contributions to more than $3 million for Kotek this year. The news comes as the Cook Political Report on Friday shifted its Oregon gubernatorial race prediction from “Leans Democrat” to “Toss-Up.”

Kotek faces an uphill battle as the left-wing candidate in Oregon, where voters are concerned about rising violent crime. Last year, Portland had the most homicides in its history. When she served as state House speaker, Kotek sided with rioters who damaged local businesses and flung rocks, bottles, and fireworks at police during Portland’s summer 2020 protests.

Kotek’s campaign did not respond to a request for comment.

Kotek is seeking to distance herself from her opponents, independent candidate Betsy Johnson and Republican Christine Drazan, as they are locked in a three-way race. The Democratic Governors Association has drawn attention to both Johnson’s and Drazan’s “A” rating from the NRA, as well as Johnson’s courting of GOP megadonors.

Christine Drazan offered her own explanation for why the race is so close during a recent appearance on FOX News:

Drazan joined “America’s Newsroom” Friday to discuss her state’s homeless crisis, its relentless crime wave and recent polls suggesting the race is tilting in her favor.

“We are up today, and I could not be more excited about where we stand right now in this race. We are leading in the polls, and Oregonians are ready for change,” she told Bill Hemmer and Dana Perino.

Drazan went on to discuss the ongoing homeless and crime crises taking place in Portland, saying the city – and the state – have become unrecognizable to its residents.

“[Oregonians] don’t recognize their own state, they certainly are not proud of their own city right now… It used to be the most safe and certainly the most beautiful state in the nation, and that’s not the experience we have now.”

The closeness of this race casts a little doubt on all the recent reports about Democrats bounding back ahead of the midterms.

Are there enough normal people in Oregon? I know there are some. Definitely some.

Meanwhile Bitch McConnell is WITHDRAWING funding from winnable races in Arizona because he would rather lose and stay minority leader than have the party win and get rid of him.

This times 100, noting that he is pulling money OUT of other winnable races too.

And to think there are still conservatives who support this corrupt rat McConnell.

America will soon disintegrate, and Biden will be the last president (elected or not) of the Union as 50 states.

It might actually be a good thing for the likes of us.

Why isn’t Trump’s pack putting any money in? Trump has raised tons of cash.

Yes but Trump; his super pac has raised more than enough money to invest in these races and yet he has not lifted a finger.

You can’t hold him to a different standard than other politicians on our side he isn’t a god. If you want to discuss withholding funds you have to discuss the man doing that most and that man is Trump.

WTF does that have to do with McConnell withdrawing money specifically for Senate candidates from a winnable race? Absolutely nothing.

As usual, cat has your tongue when it comes to your precious Mitch.

Pop quiz, Danny. Which has a greater deleterious effects on a Senate race?

A. Conceding the Senate to the left (again) in July before the midterm

B. Withdrawing 8 million from a winnable Senate race in late September before a midterm.

C. Comments from posters on LI, because I don’t know what time it is.

Bonus: who said this while simping for Cheney and Kinzinger in Feb?

“With regard to the suggestion that the RNC should be in the business of picking and choosing Republicans who ought to be supported, traditionally, the view of the national party committees is that we support all members of our party, regardless of their positions on some issues,”

1. Nothing
2. Nothing whatsoever
3. Nothing at all please live on planet Earth and stop worshipping Trump when the bible warns “put not your trust in princes”

If you want to wage a Jihad against Mitch McConnell for not spending you have to wage it against Trump to unless of course your agenda isn’t you are concerned about the senate you just want a civil war to tear up the Republican Party so Democrats win on every issue (and judging from the fact that you haven’t answered a simple what’s the difference question I suspect that is your agenda).

The RNC is responsible for “Republicans winning shit.”
People send them money specifically to do that.
Trump is none of the above, not any more.
And McConnell is one of the reasons why.

Maybe Biden could throw a little of that sweet “Big Guy” money at these races.

The money continues to flow from China and Russia. If not, the interest alone….

Biden and the Democrats are putting their money into these races. Trump raising money for his super pac than not putting that money into the senate battlegrounds however is a big deal.

While Biden is putting his money into Arizona Trump isn’t.

Here’s an idea for the Dim party if they want to hold onto power in Oregon; stop aiding and abetting Fascist street thugs and re-fund your police departments. Just sayin’

At maybe twice the previous price besides, because most cops are no longer either stupid enough nor desperate enough to work for confirmed backstabbers like you.

I really can’t imagine why on earth anyone in law enforcement would stay in a place like that. Seattle is even worse. I guess some people have a really strong sense of commitment, or family ties, etc. But for me? Fuck that and fuck them.

It will be hard for the Democrats to stop supporting their core constituency.

They’ve broadcasted the Oregon Gov race as “close” every damn election for as long as I can remember. It’s not. The outcome is the same. EVERY. SINGLE. TIME.

Think anything has changed?… look at the primaries to the north in Wa. NOTHING has changed with these voters.

Why throw money at the candidate?

The vote counters can be bought cheaper

Oregon has voter registration by mail and mail balloting only, so at no point in the process do you actually have to prove your existence. Unless the GOP is up for its own chicanery, it’s the Dems for the win.

However, is it not 40 years of Dem governors. The last Republican, Vic Atiyeh, was elected in 1982 and served through 1986, so it’s only 36 years–bad enough anyway.

Question: If we can win in a school district race with no money and no name recognition-won all open seats-why is it not possible to win all elections with that same strategy that we used? What makes the $$ so important. Are we just brainwashed by how much tv we listen to?

Best thing about this is every penny spent in Oregon is a penny not spent somewhere else so just by forcing Dems to invest in the Oregon race is a victory by the Oregon GOP, hope they go on to an electoral victory to but they have already helped all of us.