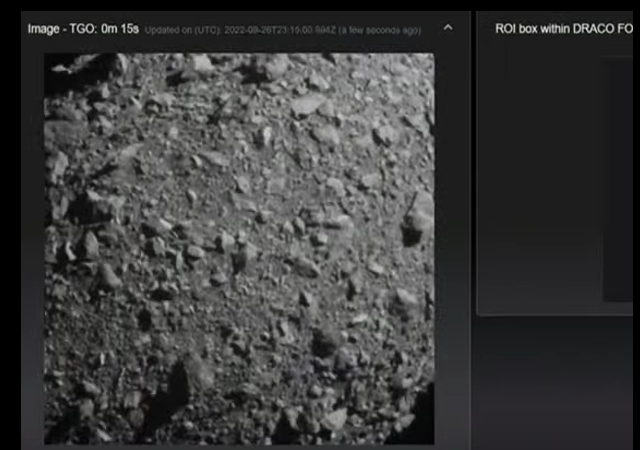 In October of 2021, I reported that The National Aeronautics and Space Administration (NASA) would launch a test mission to nudge an asteroid’s moon in a test to see if asteroid deflection is possible to protect our planet. The experiment is called the “Double Asteroid Redirection Test.”  The mission launched in November.

On Monday, NASA tested the spacecraft successfully, as it intentionally slammed into an asteroid in a historic test of humanity’s ability to protect Earth from an impact event.

The agency’s DART probe, short for Double Asteroid Redirection Test, carried out the first-of-its-kind maneuver on a small and harmless space rock known as Dimorphos, which is currently located roughly 6.8 million miles away from Earth.

The $325 million mission was designed to see whether “nudging” an asteroid can alter its trajectory, providing scientists with a valuable real-world test of planetary defense technologies.

The DART spacecraft, which is about the size of a vending machine, crashed into Dimorphos on Monday at 7:14 p.m. ET, flying head-on into the space rock at 14,000 miles per hour. It may take up to several weeks for NASA to confirm any changes to the space rock’s trajectory, but the goal is to shorten the asteroid’s nearly 12-hour orbit by several minutes.

IMPACT SUCCESS! Watch from #DARTMIssion’s DRACO Camera, as the vending machine-sized spacecraft successfully collides with asteroid Dimorphos, which is the size of a football stadium and poses no threat to Earth. pic.twitter.com/7bXipPkjWD

It will take several more weeks of data analysis by scientists to determine just how successfully the spacecraft’s orbit of Dimorphos was altered.

Whether it succeeded beyond accomplishing its intended impact will not be known until further ground-based telescope observations of the asteroid next month. But NASA officials hailed the immediate outcome of Monday’s experiment, saying the spacecraft appeared to have performed as designed.

…Monday evening’s impact was monitored in near real time from the mission operations center at the Johns Hopkins University Applied Physics Laboratory (APL) in Laurel, Maryland.

Cheers could be heard from engineers in the control room as second-by-second images of the target asteroid grew larger and ultimately filled the TV screen of NASA’s live webcast just before the spacecraft’s signal was lost, confirming it had successfully crashed into Dimorphos.

In related news, new studies suggest that the asteroid believed to have caused the extinction of the dinosaurs landed in sulfur-rich rock. The ensuing sulfur-containing aerosols remained atmospheric for decades, plummeting the planet into seemingly endless winter.

The Yucatán in the Late Cretaceous was like today, with warm, shallow seas overlying a sulfur-rich carbonate platform. Volatilization of these rocks during the impact would have injected massive loads of carbon dioxide, sulfur, and other climatically active gases into the atmosphere. In particular, atmospheric sulfur rapidly forms sulfate aerosols, which can reflect incoming solar radiation and cool the planet for many years after an impact-generated plume has dissipated.

Geochemists recently confirmed that rubble collected from the Chicxulub crater contained virtually no sulfur… meaning that all the sulfur in these rocks, with an estimated mass of more than 10 million times the Eiffel Tower, must have been vaporized into the atmosphere. However, sulfate aerosols have long-term climatic effects only when they form in the upper reaches of the atmosphere, termed the stratosphere, where they can remain for years to decades.

Today’s test is momentous, as it is only a matter of time before a sizeable asteroid strikes Earth again. It’s heartening to know that enduring the Sweet Meteor of Death is not our only option.

And now that NASA has this capability, the feds are going to explore how to weaponize it against conservative political opponents.

They will only use this against Conservative and Non-Inclusive asteroids.

Not to mention cisheteronormative ones.

I guess that’s easier than sending Bruce Willis up there to drill a hole and drop a nuke inside. I hope they didn’t change the trajectory enough to where it slams into the earth 20 years from now. I’m sure they thought that through… but wouldn’t surprise me if they didn’t.

The asteroid is small.

It’s small, but big enough for them to hit it with a projectile. Small asteroids do big damage too.

So I guess that the Physics equation of Force = (Mass x Acceleration) is irrelevant?

1) What size rocket projectile are we going to be required to send to alter the force vector of a space rock that was large enough to create a crater like the one on the Yucatan?

2) Referring back to F = (M x A), how much thrust would such a projectile need, in order alter the course of a space rock?

3) How far away would we have to intercept/impact any space rock in order to alter the course of its path where it would not impact the earth?

4) What about the gravitational pull of the Earth and/or the Moon?

5) How long would such a “Earth defense weapon” be able to be on stand-by and still perform up to its original specifications?

Then there is/are the law(s) of unintended consequences which we can’t even imagine.

All I can see that NASA did was to shoot at and impact a moving target; just like trap-shooting a clay.

But when the clay has the mass of an aircraft carrier,super-tanker or the old and now gone and forgotten Astrodome, you’re going to need something the size of a tug boat, propelled at hypersonic speed to alter its course and impact it so far away, that you wouldn’t be able to see it.

I’m not saying they have the problem solved, yet, only that this is a fair test case.

Of course, I do have a bias toward thinking that NASA is staffed by competent people, a bias that might now be at least 3 presidencies out-of-date.

NASA’s trust was hard-won, but their mission got changed to perverted social engineering, so it my not be the organization that could make a walk on the moon sound routine, any more.

I knew two engineers before they worked at NASA. They were not good engineers.

I’m curious about this one myself for several of the reasons you list.

That, and where in the Constitution is there anything about crashing things into asteroids?

Do that while the asteroid is far enough away and the directional change can prevent a collision.

These folks know what they’re doing. It’s only a test, but testing is pretty much what scientists do. Cut ’em some slack.

I hope their calculations included the change in center of mass as a result of embedding the probe in that side of the asteroid.

Thank heavens for that black woman at the end. Even though she is just an administrator, her presence helped stabilize my diversity worldview, which the rest of the video was seriously threatening.

But, what’s on the program manager’s t-shirt?

We need to if we gotta to cancel Zer.

With that many women involved in steering it, it was bound to crash into something.

I’m stuck with a mental image of a confused and pissed off asteroid looking around trying to figure out who slugged him.

Where’s the kaboom? There was supposed to be an asteroid shattered kamoob!

So many snide remarks. How many making them downticked me when I revealed I didnt’t watch, or care, about the space mission so two men could plant a flag and play golf on the moon?

At the rate our civilization is collapsing, maybe an asteroid putting us out of our misery is not such a bad idea.

I was a little skeptical, having been suckered into watching Geraldo open Al Capone’s vault. This surprised me. Now I’ll need to listen to coworkers revisit Stanley Kubrick’s moon films, chemtrails, and conspiracies involving shadowy figures with made up names like Klaus Schwab and George Soros.

Come to the dark side — gun-nuttery — where our villains have names like Bogus, Looney, Kukier, Weiner, Mullarkey…

Could have done the same “experiment” with a cheap computer and a competent physicist.

Given NASA’s record lately with launching a big rocket built in part using proven designs and parts, I’m glad they showed it working.

given the distance, that’s a pretty good shot

considering fjb couldn’t put a carrot in a washtub, the nasa folks hit the bullseye