The Fed will likely worsen the situation next week if it hikes interest rates, but what else is new? 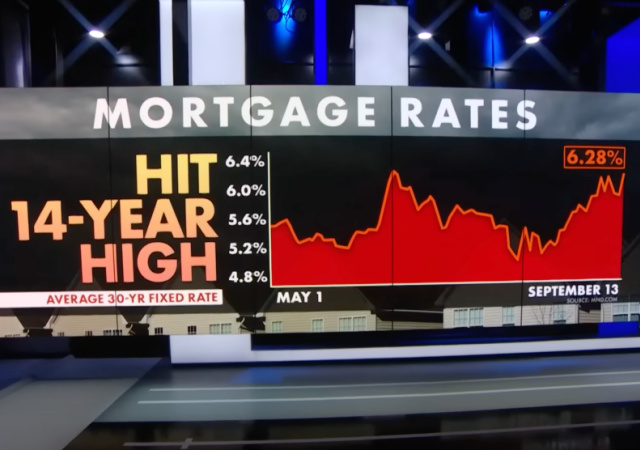 I guess no one learns history because we keep repeating it.

Welcome to the new housing bubble! Mortgage rates hit 6%, which is the highest since 1999.

But mortgage applications are down 29% from a year ago. Yikes. Mortgage Bankers Association made the announcement:

“The 30-year fixed mortgage rate hit the six percent mark for the first time since 2008 – rising to 6.01 percent – which is essentially double what it was a year ago,” said Joel Kan, MBA’s Associate Vice President of Economic and Industry Forecasting. “Higher mortgage rates have pushed refinance activity down more than 80 percent from last year and have contributed to more homebuyers staying on the sidelines. Government loans, which tend to be favored by first-time buyers, bucked this trend and increased over the week, driven mainly by VA and USDA lending activity.”

Added Kan, “The spread between the conforming 30-year fixed mortgage rate and both ARM and jumbo loans remained wide last week, at 118 and 45 basis points, respectively. The wide spread underscores the volatility in capital markets due to uncertainty about the Fed’s next policy moves.”

I agree with CBS News. I love looking at Zillow. I’ve noticed many houses haven’t sold, and many owners dropped their prices…significantly.

Homebuyers can expect mortgage rates to stay in the 5%-6% range over the next few months, as a combination of still-high inflation and the Fed’s increasing borrowing costs will keep them elevated. https://t.co/b4oUEUX1TA

From CNN Business with the headline, The Fed could crash the housing market:

What’s happening: According to Tuesday’s Consumer Price Index report, housing costs rose 0.7% in August and are up 6.2% year-over-year, the largest increase since 1991.

That increase was largely responsible for August’s higher-than-expected pace of inflation. Combined with a tight labor market, those high prices give the Fed reason to continue to go hard at its policy meeting next week and beyond, Marvin Loh, senior strategist at State Street, told me.

The Fed needs to see housing costs ease by about half a percentage point to reach its ultimate inflation goal, Loh added.

The job won’t be easy. Housing prices can remain stubbornly high, even as the Fed works to counteract them.

This goes for private companies, too. Apparently, those CEOs forget 2008. Bank of America CEO Brian Moynihan said the company’s plan to offer zero-down mortgages to minorities is a way “to attract all aspects of investment to underprivileged communities.”

Great. Can they afford the monthly payments, or will there be a ton of foreclosed homes the bank is stuck with when people stop making payments?

It offers loans to minority buyers without the need for a down payment, closing costs or private mortgage insurance (PMI), an extra cost that’s customary for buyers who put down less than 20% of the home’s purchase price.

Crucially, the program also requires no minimum credit score, with eligibility focused instead on a borrower’s solid track record of rent payments and regular monthly bills like utilities and phone. Before applying, buyers must finish a homebuyer certification course that counsels them on ownership responsibilities and other considerations.

Great. I ask again, can they afford the monthly payments?

“All economic indicators point to good times ahead. Now is the ideal time to start letting 2 million illegal immigrants into the country per year to help revive the economy. All thing considered, crime will probably drop by half and illegal drug problems will be a thing of the past—especially here in Pennsylvania.”

My name’s Fetterman and I approved this ad.

I must not tell lies.

It has to do with print and spend as much as energy.

This seems ok to me. Housing prices are bonkers in reaction to near 0% interest rates and an over-inflated M2 money supply fueled by helicopter effects from pandemic “rescue” policies.

Yes, we should also confront structural forces that artificially limit supply rather than letting the market react.

Seems to me that interest rates are historically and artificially low by ‘manipulation’ from the federal reserve. It is only high if you set normal to the interest rates of the last decade, which was a historical anomaly.

What’s the name for the “but” in crime falling but more people are in prison; it’s cited as an idiot’s mistake in political theory.

Are the working on the sequel, “the Big Sh1t.”