Michigan Election Board Votes to Put Abortion on the Ballot

Michigan Election Board Votes to Put Abortion on the Ballot

The vote will either legalize abortion or outlaw it except if the mother’s life is at risk. 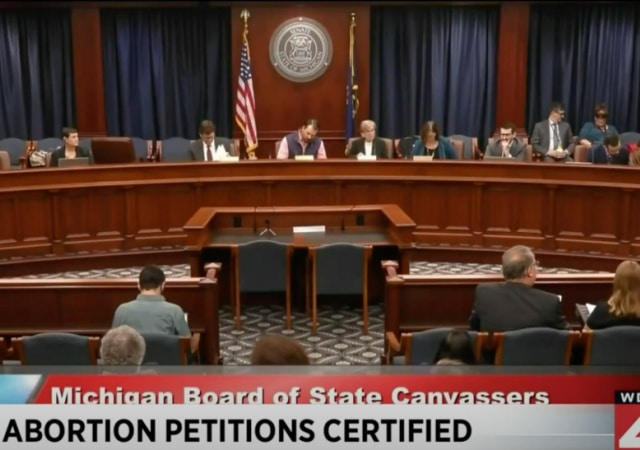 Michigan voters will decide in November if the state will legalize abortion or put into effect a 100-year-old law that outlaws abortion unless the mother is at risk.

Michigan’s elections panel voted 4-0 to add the Reproductive Freedom for All amendment to the ballot:

The Reproductive Freedom for All amendment would add an explicit right to seek abortions in Michigan, giving voters in the state a chance to decide whether to enshrine the right to the procedure in the state’s constitution after the U.S. Supreme Court overturned Roe v. Wade, the landmark federal case that had safeguarded a national right to abortion for nearly half a century.

Ahead of the vote, Reproductive Freedom for All attorney Steve Liedel told canvassers that hundreds of thousands of voters signed their names to the petition to give voters a chance to decide the fate of abortion rights in the state.

“Their overwhelming message was and is that a proposed constitutional amendment is needed to ensure that Michigan women have the freedom to make highly personal decisions about abortion themselves instead of having politicians decide for them,” he said.

Abortion supporters gained 750,000 signatures to add the amendment to the ballot.

On August 30, the elections panel voted 2-2 along party lines on the amendment. The tie kept the amendment off the ballot.

The Republicans claimed that “spacing and formatting errors on the text canvassers presented to voters rendered the entire effort invalid.”

Then the Michigan Supreme Court voted 5-2 to certify the initiative for the ballot, overriding the tie. Chief Justice Bridget McCormack didn’t buy the Republicans’ explanation. The two justices who dissented wanted oral arguments:

Two justices dissented, arguing that the court should have held oral arguments on the case before issuing a ruling and that the claims raised by the challengers are legitimate.

“It may have the right words in the right order,” Justice David Viviano said about the abortion rights petition, “but the lack of critical word spaces renders the remaining text much more difficult to read and comprehend.”

Abortion will also be on the ballots in California, Kentucky, Montana, and Vermont.

I’m good with it being voted on. That’s the whole purpose of the laboratories of democracy.

Now all MI’ers need to get out there and campaign for the one they believe in.

Except when judges come along and cancel the will of the people, as they did when Michiganders voted to amend the state constitution to keep marriage as being between one man and one woman.

Ruth Bader Ginsburg passed 18 September 2020. We will likely see violent, pro-abortion fascist-activist groups like Ruth Sent Us fire bombing and smashing storefront windows – centered around voting and right to life community spaces. All of it beginning Sunday the 18th through the November elections. Media will try to present the mayhem as a spontaneous outpouring of grief – but it’s not spontaneous – all of it is carefully planned and organized.

No, you’re wrong because the voters will be confronted with a misleadingly worded ballot proposition. The measure is couched in overly broad terms, encompassing “reproductive freedom.” for “all decisions about pregnancy” and forbidding “state discrimination in enforcement of this right.” Who could possible oppose freedom? All garbage because people already enjoy reproductive freedom and the state cannot legally discriminate, The only thing this obscenity really does is virtually guarantee an unlimited right to abort right up until birth. But I have little doubt that a majority of Michigan voters will now support an abortion on demand regime without even knowing they’re supporting abortion on demand.

When the best argument Republicans bring to the table is that the printed words were badly spaced, you know they showed up just so they could lose.

It wasn’t a bad argument. What was presented to the public was the equivalent of this version of your comment: WhenthebestargumentRepublicansbringtothetableisthattheprintedwordswerebadlyspaced,youknowtheshowedupjustsotheycouldlose.

In a very long ballot proposal. This garbage was specifically worded by abortion activists to impose their wildest abortion dreams on Michigan. Parental rights? Gone. Trimester abortions for anyone, including minors? Thumbs up. They’re going to be a reality in this self-effectuating abortion regime regime which guarantees an “individual” a virtually unlimited right to abort. What are the limits? No practical limits. The state cannot stop it in absent a narrowly defined “compelling reason” which they’ll never be able to prove as long as the “mental health” of the “individual” is asserted. What is an “individual”? guess what, it’s going to include minor children. What impacts mental health? Anything. So it’s going to be Kermit Gosnel at your service. I lack faith in the voters actually taking the time to understand the implications of this disaster.

Michigan voters will decide in November if the state will legalize abortion or put into effect a 100-year-old law that outlaws abortion unless the mother is at risk.

Huh? Where’d you get that from? It’s not anywhere in the article you linked to, and I don’t believe it’s correct.

If the amendment passes, a “right” to abortion will be explicitly in the constitution. And if it fails, that same “right” will still be there in the shadows and penumbras where the courts have just purported to find it. Nothing will change.

It’s true that if the amendment fails there’s at least a theoretical chance that the court ruling might be overturned on appeal, leaving the old law to come back into effect; but given the state supreme court’s membership that seems doubtful.

An MI judge struck down a 1931 abortion law recently, that limited abortion to cases where the mother’s life was in danger. I don’t know if that’s the ballot choice being offered to voters. https://www.dailywire.com/news/judge-strikes-down-michigans-1931-abortion-law

Yes, that’s what I referred to. The courts have found a “right” to abortion already hiding in the Michigan constitution. If this referendum fails, that won’t change.

It will stabilize at around 16 weeks, long enough to find out you’re pregnant and short enough so that the fetus doesn’t sonogram as cute. Much either side of that and you’ll get a hoard of angry voters turning out against you on one side or the other.

But not in America anymore, they let murders out without any bail, so what’s the problem with murdering your child?

I don’t see a problem
Here

Marge Piercy’s “Right to Life” gives the other side (from “The Moon Is Always Female”)
https://exceptindreams.livejournal.com/91327.html

Is that why there’s always a man in it?

“The people have spoken” as the gavel falls on mountains of ridiculous bills, deeming them law. The problem is in the Democracy of the people speaking.
Talk all you want, but if a politician chooses not to hear you are wasting breath.
Are you sure those votes are legit, party with no known opposition?

Just noting that while the legislature in Michigan is controlled by the Republicans, the Executive Branch; including Governor, Secretary of State, and Attorney General are Democrats. Which means that the voting process and counting of votes will be in their hands. Yes, Michigan uses Dominion voting machines. In fact, Michigan is where one of the machines turned up in a yard sale recently. And therefore, the vote totals for that particular issue are pretty much already determined and will be announced in November.

except if the mother’s life is at risk

Given Michigan’s judiciary that will not be a meaningful bar.

Abortion is a squirrely thing on the ballot. Kansas had a ballot measure that simply declared that the state constitution did *not* have a right to abortion in it (something obvious that even an idiot should be able to see, but somehow got read into it by our supposed ‘conservative’ supremes). It brought out more frothing loons to campaign against it as being anti-choice, and Kansasans being a very freedom loving people, got hoodwinked for the most part.

If MI Democrats were actually and secretly implementing a KKK plan to abort as many black and Hispanic Michiganders as possible…what would they be doing differently than what they’re doing now?

If the dems lose this vote, they will still be able to work to expand abortion as a normal process in the legislature. If the reps lose, they will have to amend the constitution, a much more difficult process. Why do I keep thinking conservative leaders want to fail? How did it get to be that the only choices are the 2 extremes? Everything on one roll of the dice for us, but the other guy gets to play again.

They won’t have to. If they lose this vote, there will still be a “right” to abortion already in the constitution, because a court recently found it hiding there, and there is no chance of the state supreme court reversing that decision. So the referendum is superfluous.

Yeah, no putting their thumbs on the scales with that title.

Detroit is in Michigan. The largest aggregation of Islam in America is in Michigan. Michigan is a place where they believe that setting cars on fire is a traditional means of celebrating Halloween. Population management may be an idea whose time has come.