“MAGA Republicans” react to “the single most toxic, inflammatory, and hypocritical speech by an American President” ever

“MAGA Republicans” react to “the single most toxic, inflammatory, and hypocritical speech by an American President” ever 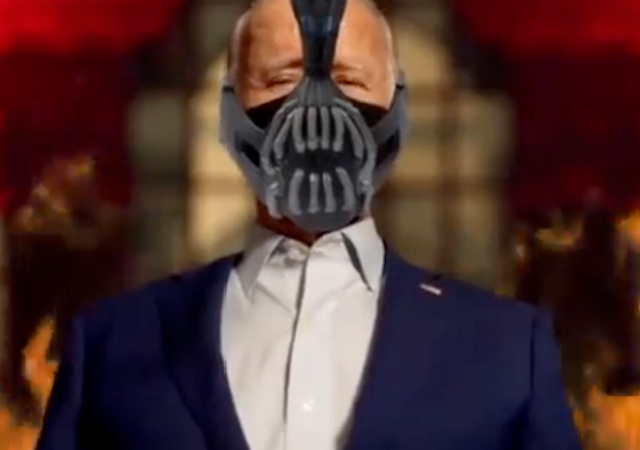 Oh boy, the reactions from Biden’s speech last night are comical and will probably run through 2024.

The Biden administration made significant missteps when choosing the tone and optics of their “soul of the nation” speech.

We have comparisons to dictators:

“Here’s to the nice first try, Joe. But next time, add more red, some stars and switch out the medallion.” pic.twitter.com/5w5wJP0jbx

Imagery of trains added to imagery of Hitler is just … a bad idea. pic.twitter.com/uM181sDwy3

From the great Carpe Donktum. Biden as Bane! pic.twitter.com/PPeJ5XZ7uR

President Trump had thoughts, he posted on Truth. 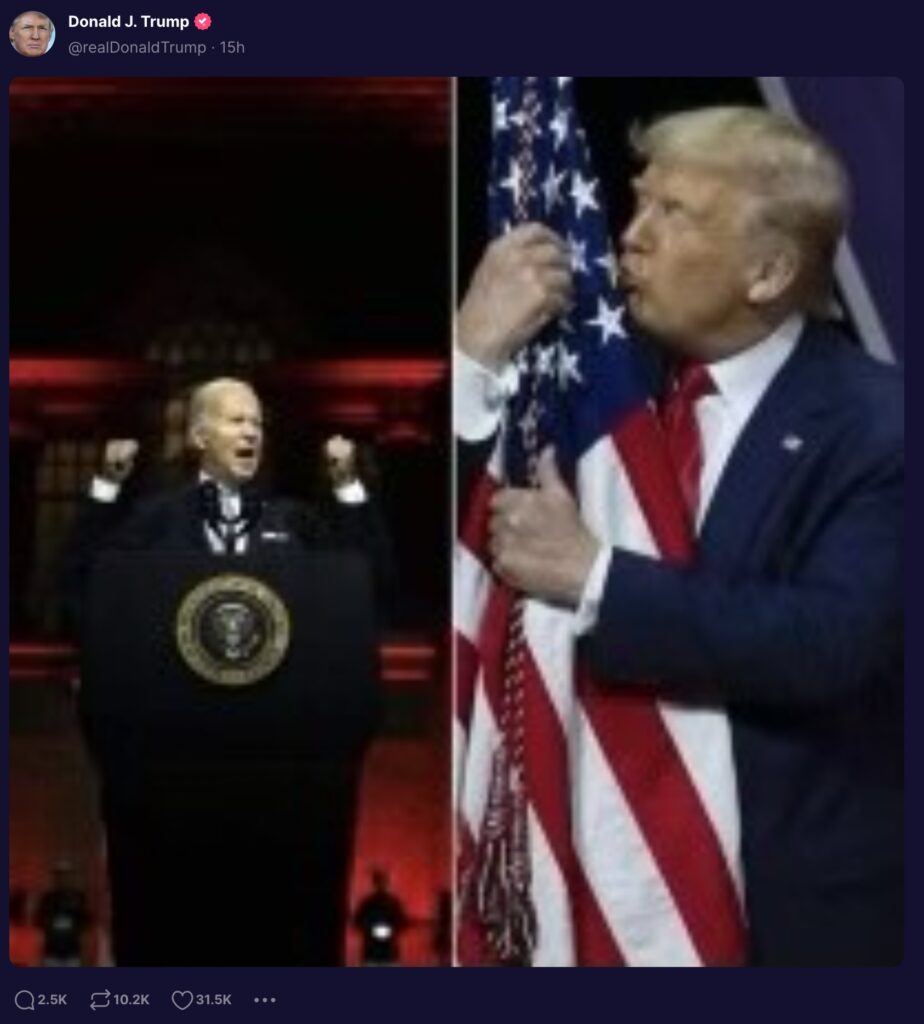 Former President Donald Trump is blasting Joe Biden's prime-time speech, calling it "awkward and angry," and saying the president "must be insane or suffering from late stage dementia." https://t.co/sIvg3Wx5SJ pic.twitter.com/xy0rn2ohIm

Bethany Mandel made a good point on Twitter. Most people won’t hear the speech but the images they see will speak loudly.

I did not watch the speech. Vast majority of Americans didn’t is my guess. They’ll only see a picture or two. And the optics are … not great. pic.twitter.com/Cz3eW7uu4X

If you did watch the speech, you know the optics were not the scariest part. Twitter had dire warnings for those of us that still care about the Republic.

GOP states needs to step up and start being proactive. Now. Not later. Now.

Direct your state police agencies to reorder themselves to protect citizens against unlawful federal agencies. Join to ban communist corporations. Create a separate economy from the ground up.

.@SenJohnKennedy: "I'm very disappointed that the president would call people who don't agree with him those kind of names. I just think he's made a political mistake — but it says something about his administration." pic.twitter.com/fWQj3k9r45

That was the most demagogic, outrageous, and divisive speech I have ever seen from an American president. Joe Biden essentially declared all those who oppose him and his agenda enemies of the republic. Truly shameful. pic.twitter.com/ZcJX2BbZlt

I am a student of American history. I’ve read every major speech by every President since Washington.

That was the single most toxic, inflammatory, and hypocritical speech by an American President I am aware of.

“A speech about the “soul of the nation” which looks like it’s made from hell,” I don’t know a better statement to describe where we are on this timeline.

A speech about the “soul of the nation” which looks like it’s made from hell pic.twitter.com/l5v1LAA0WW

They’re going to indict Trump for lying to the FBI about no more classified documents and the Biden speech is preparing the political space for the indictment of the enemy of democracy.

In reading your past comments, I got the impression that you’re a troll.

Another one? How many trolls populate this site?

Re: “reading well” — you forgot to capitalize the first word in your insult.

I doubt that. Trump has been around long enough to know you don’t just talk the the FBI, you let your attorneys do so. They love perjury traps too much and they’ve been trying for too many years to railroad him.

I agree. Like him or not, Trump has been in business long enough to know that lawyers handle everything. As for the breathless yammering about all the “Classified” material Trump had he said he declassified it so I’ll wait to see the SCOTUS opinion on this before final judgement.
Raid Trump, hire 87,000 IRS agents and arm them then Brandon gives this angry totalitarian diatribe in front of the elections. Who should you be afraid of?

With toilet paper stuck to the bottom of his shoe…

I wonder what MAGA independents think about last night’s screed?

Biden keeps his track record intact of making bad decisions. If only his batting average was for baseball.

It is a New Yorker link, but the basis behind the set: https://www.newyorker.com/books/page-turner/satan-is-real-the-gospel-darkness-of-the-louvin-brothers

Is there any possibility the Dems are setting the stage to remove him? They let him fly his crazy flag for all to see? Give themselves cover for impeaching him or using the 25th? Something so egregious no one can argue with it?

Or will they roll last nights turd in a Zig-Zag and tell us to smoke it?

No, whoever is running the administration (it sure isn’t Biden himself) took off their mask.

I was wondering about the remote possibility that they might want to dial back their image some, adjust their mask, and so hang Biden out to dry, install Kamala or remove her too and install someone who is not so tarnished – or is at least smoother and doesn’t need daily diaper changes. Last night was so over the top, it might have given the left cover to say “we had no idea” and to take him out.

I admit however that’s wishful / pipe-dream stuff. Done within the next 60 days it might improve their odds in November. Who the hell knows though … this admin is out of their cotton picking minds …

“Last night was so over the top, it might have given the left cover to say “we had no idea” and to take him out.”

Yeah, like he hired the lighting director. Try again, swamp.

They didn’t hire the lighting director. But someone in Biden’s circle picked the venue. Pretty sure the lights came with it. Intentional or not, it was a huge mistake.

Not before the election. If they are going to replace Biden, they will have to do it in the lame duck period if they want to keep the VP position, because a Republican Congress would never confirm a Dem VP pick.

I wonder what they will do after the election but before the new congress takes office. If the GOP wins on Nov 8, will they do something to prevent the newly elected congress from actually taking office on Jan 3?

You can bet the farm on that

I didn’t watch the speech because – well, I almost never watch political speeches. But in any case, there were only two ways it could go. Total incoherence, or paranoid insanity. Both are the true Brandon.

Did the morning News shows even mention Bidens screech this morning?

All the Never Trump jackasses are frantically trying to delete and backpedal their squeeing over Biden’s ‘forceful leadership’ when they realize how badly it has backfired.

Do not let them pretend that they weren’t 100% on board with this bullshit.

Not all of them. Jonah “Whale” Goldberg says the speech was the truth, he just wishes Brandon hadn’t said the truth before the cattle cars.

This speech was a declaration of war by our government against a large segment of its own people.
The fools.

It’s not just the Eurofascists Biden is parroting, but also the South American variety. My ancestors were among those persecuted for standing up to the Perons and their fascist “Justicialist” (even people today in Buenos Aires don’t know what that word means) party in Argentina in the day. Lost over half of the family to the secret police forces. That’s essentially what Biden is doing now—Joe and Jillbilly becoming Juan and Evilla. Nobody but those of us with that heritage knows how evil Juan and Evita were, and believe me—they were not the characters in that stupid musical.

For those who had any doubts and continued to make excuses that angry diatribe should convince you of the truth. Brandon and The Dems really do hate you and half the country. Agree with everything they say or prepare for the full weight of The State and it’s minions to come crashing down.

I hate to tell Jesse Watters, but he’s about 10 years too late. At this point, all the red state governments can do is provide a “Ft Sumter” moment.

Actually, the red states need to avoid a “Ft Sumter moment.” The attack on Ft. Sumter created support for a war against the CSA. Until that moment, there was insufficient pro-war sentiment in the North for Lincoln to have his war. Lincoln refused to negotiate with the CSA about Union insular possessions (like Ft. Sumter) within the CSA’s borders, practically inviting an inevitable attack on one of them.

Next time, cooler heads need to prevail. If any state or group of states decides to just stop playing and take their balls home, liberal states will say “good riddance.” They won’t be interested in having them back. Those states that break away need to prevent giving the federal government the pretext they need to use violence against any break-away state, as Lincoln needed the attack on Ft. Sumter to have his war. Like the situation just before the Civil War, there will be no support for a war unless the seceding states provide the impetus. Simply seceding didn’t provide that impetus then, it won’t this time either. If the divisions the Left has caused in this country have a bright side, it’s that they will be glad to see Red state leave the Union, and will resist attempts to bring them back.

People are talking so much about what he said and how he said it and need to the why and when.

Remember everything coming out of Democrat Washington is stage by two Hollywood producers hired by House Democrats. They most certainly had a hand in this production.

So why and why now? The J6 abomination will be reconvening in a couple weeks with fresh ammunition from the equally staged and timed raid on Trump’s personal residence. Look for them to piggy back off of Biden’s speech throughout the witch trial to come. Look for non-stop leaks of “Top Secret Information” that the committee members and the press are not supposed to have because, you know, Top Secret. Look for a staged McCarthy-esque Hollywood production.

This speech was not about the soul of Democracy. This was about getting rid of Trump, Trump, Trump. And then they will stain and shame every Republican with it in ad after ad leading up to the election.

What were those producers inspired by? V is for Vendetta?

/The callouts are for the idiots and trolls, interlopers and apparatchiks

(*) Not even arguable. Incitement shots would be a fatal drinking game with that “speech.” Can we prosecute Gropey-Joe under the Orange Man Bad standard for “insurrection?”

(**) If you’re not the majority, you’re the extreme (doubtless also “deplorable”, and “irredeemable”) minority, to be culled. Brandon’s press secretary, and regime mouthpieces doubled down the whole next day, one supposes in case President Sniffs-Their-Hair mumbled when he said it.

(***) Change to the government by force, outside the declared mechanisms is, colloquially, “insurrection.” “You don’t agree with my policies, you’re out of the country.” is a bit of a change to how we govern in this country. “Or I’ll nuke you from F-15s.” is a bit force-y.

Can an insurrectionist President prosecute himself? One wonders.

“Change to the government by force, outside the declared mechanisms is, colloquially, ‘insurrection.’”

Is there a word for the use of force to restore the law (Constitution)? And can such an act be a crime? Under such conditions, is “chang(ing) the government by force” still an “insurrection”? I would argue not. At worst, it’s a counter-insurrection against those forces in government that overturned the lawful government.

It was a choreographed Kabuki dance of the first order.

Eyes on the ball: the election should be determined by the lousy economy, open borders and failed foreign policy. Biden’s Fourth Reich speech is just frosting on the poisoned cake.

Does that “Bane” mask provide Joe with a constant dose of drugs that keep him lucid in public?