BBC: “Truss will become prime minister on Tuesday after travelling to meet the Queen at Balmoral in Scotland.” 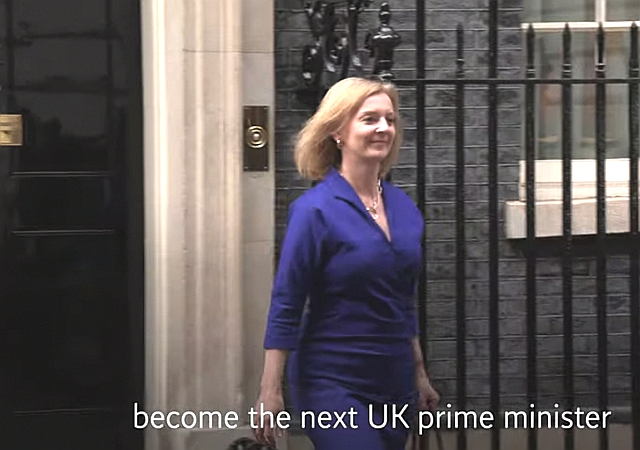 The serving British Foreign Secretary, Liz Truss, has been elected as the leader of the Conservative Party, paving the way for her to replace Prime Minister Boris Johnson.

The 47-year-old Truss defeated the rival candidate Rishi Sunak by winning 57 percent of the Tory membership vote. The contest was held after Prime Minster Johnson stepped down from the party leadership in early July and announced that he would stay in office until party members elected a replacement.

Truss is expected to take the country’s highest office tomorrow. “Truss will become prime minister on Tuesday after travelling to meet the Queen at Balmoral in Scotland,” the BBC confirmed.

I am honoured to be elected Leader of the Conservative Party.

Thank you for putting your trust in me to lead and deliver for our great country.

I will take bold action to get all of us through these tough times, grow our economy, and unleash the United Kingdom’s potential. pic.twitter.com/xCGGTJzjqb

The Times of London reported the election of the new Tory party leader:

Liz Truss will become Britain’s 56th prime minister after a narrower-than-expected victory over Rishi Sunak in the Tory leadership race.

A protracted and bitter two-month contest came to an end as Truss was named the winner by Sir Graham Brady, head of the 1922 Committee, in central London. Truss won with 81,326 votes to Sunak’s 60,339 member votes — or 57 per cent of the total.

In her acceptance speech, Truss promised to cut taxes, deal with energy bills and fix the NHS, and appeared to rule out an early election, saying: “We will deliver a great victory for the Conservative Party in 2024”. She also praised her predecessor, Boris Johnson, saying he was “admired from Kyiv to Carlisle”.

Mr Johnson, who was forced to resign after a wave of ministers left his government over a series of controversies, will visit the Queen at Balmoral to formally tender his resignation tomorrow.

Reacting to Ms Truss’s victory, he said she “has the right plan to tackle the cost of living crisis, unite our party and continue the great work of uniting and levelling up our country”.

I have been proud to serve as leader of the Conservative Party for the last three years, winning the biggest majority for decades, getting Brexit done, overseeing the fastest vaccine rollout in Europe and giving vital support to Ukraine.

Despite the 2016 Brexit vote, the UK hasn’t been able to take control of its borders. Illegal immigration from continental Europe is at an all-time high. “A new record has been set for the number of migrants crossing the English Channel in a single day,” the BBC reported. “Almost 1,300 made the crossing on 22 August, in 27 small boats.”

The country is also at the forefront of the woke culture war being waged by the Far Left. During the Tory leadership contest, Truss angered “trans-rights” activists by saying that no one had the right to ‘self-identify’ as a woman without proper medical checks. “I have full respect for transgender people, however it wouldn’t be right to have self identification with no checks and balances in the system,” she said.

Her comments triggered a wave of outrage among the woke activists. Earlier this month, Politico noted the “LGBT [Tory] members’ unhappiness over her stance on transgender rights, which she has raised repeatedly in order to put forward the view that trans women are not women.”

If the other candidate had been Kemi Badenoch (spelling?), Truss would have lost

Maybe. If that were so, why did she not make it through the preliminary rounds? Are you saying she’s so much more popular with the paid-up membership than with her fellow MPs? That’s possible, but itself needs explanation.

PS. If I were a Tory MP I would have voted for Badenoch.

How does she compare to Thatcher? They need Thatcher now, like we need Reagan…..

England will never see another Thatcher in the near future. Perhaps after it burns to the ground and from the ashes…

Nigel Farage would do it, but the English are too far gone.

She is like every other politician we have been lumped with. She will say what she and her handlers think we want to hear.

The proof will be in the pudding and only time will tell.

Prediction: she will be a Tory-lite, mostly disappointing leader but a modest improvement over a Labor leader or Boris Johnson and his climate change craziness.

“We will pursue decline more slowly than labor!!” shall be the rallying cry.

More of the same. The country will burn to the ground before they figure it out.

On the bright side the new PM has perhaps six to nine months to adopt the measures necessary to stave off the potential catastrophe. Either the she and her party will or they won’t. Either they muster the courage required to identify the systemic issues and honestly explain what they doing to correct them or they won’t.

It’s a difficult proposition in face of kamikaze levels of resistance from entrenched interests who benefit from the current systems. Without dramatic changes those interests are only slightly prolonging the ability to continue the system. Manufacturing being idled and folks out of work due to lack of reliable domestic energy because the govt effed up isn’t likely to be accepted by the citizens.

Wearing a Ukrainian flag lapel pin is easy. Watching the economy come apart from a cold, dark residence this winter is far less so. I doubt the average Brit is willing to endure that level of sacrifice for Ukraine.

It’s going to get cold and dark long before 6-9 months Chief. I suspect Ms Liz will be out by mid winter as there is simply nothing they can do to stave off what is coming. Europe is in deep trouble, and as with all such things, the “bad luck” all comes at the same time. No country will escape.

No doubt. The Brits have maybe as long as 90 days at the outside to prevent catastrophe in the new year. Britain has a bit more freedom of action than the EU but if they don’t act decisively in the short term they are hosed.

Well, one WEF stooge replaced another. I am sure this will result in massive amounts of freedom for the common man.

I’m not here to disagree with you or anything, but what actually constitutes a WEF stooge.

Just for context, Trump spoke at the WEF too in 2020. What does one have to do to be considered a WEF puppet or puppeteer?

I hope she has the ovaries to turn those boats around

If that was the only thing she did as PM she would be a 1000 times better than the last handful of idiots to be Prime Minister.

If France objects she could offer to meet Macron at Trafalgar for round 2.

I don’t see much difference between a “Conservative” in the UK and a Liberal Democrat in the US.

The only actual Conservatives over there seem to be the UKIP people, and NOT the Tories.

Another day, another dizzy dame.

The association is such that we shouldn’t hope that anybody touted by the WEF will in any way further the cause of freedom. Maybe I am wrong about this lady, but her “no white male” cabinet position is discouraging.

Oops. That reply should have been to HealthguyFSU. My apologies.

I wonder if Truss can help heal the obvious rupture in British society?

Empires end. This one is now in full death throes.

Well, it is not like white males have anything at all to do with Britain.
/ sarc.

Don’t know if that is a considered policy position, or chance in the selections; but such an exclusion of such a large part of her own party is not encouraging that she will do anything to try to save Britain from its situation.

I suspect “fix energy bills” will not include dumping the disastrous windmill farms and restarting North Sea petroleum extraction.

Truss promised to cut taxes, deal with energy bills and fix the NHS…

Gonna take an axe to “green energy”? Because in the long haul that’s the only way energy bills come down. In the short term? Not a chance in hell.

Fix the NHS? Yeah, right. That’s like the US fixing the IRS.

We still have to see what happens this week, however things seem to be unfolding.

If the report is true, she has lifted a fracking ban and eased access to drilling.
Could it be that she’s got some balls?