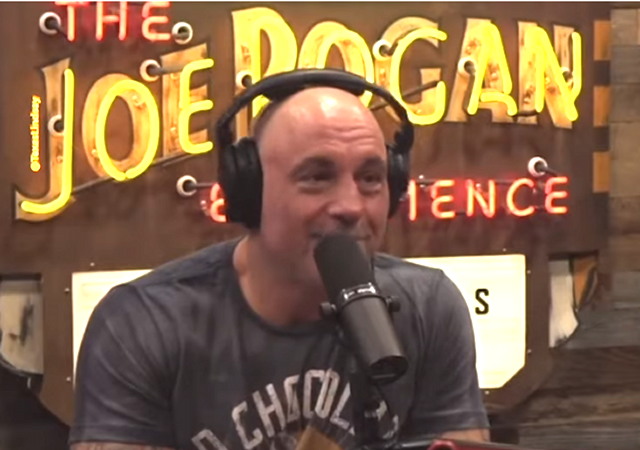 Here we go again. Back in January, singer Neil Young pulled his music from Spotify, claiming that Joe Rogan was spreading misinformation about COVID, causing many people on the left to demand the platform dump Rogan.

Now the left is once again demanding the same thing because during a recent episode of his podcast, Rogan said “vote Republican.”

Rogan was explaining to a guest how voters who are angry about how the pandemic was handled can express their desire for some sort of recourse, but the left has become so insane that even suggesting someone vote Republican is an unforgivable sin.

Joe Rogan’s declaration over the weekend that he plans to vote for Republican Party candidates because of Democrats’ “errors” in their management of the COVID pandemic has ignited calls to boycott his streaming home, Spotify.

The host of the popular “The Joe Rogan Experience” told his guest, Green Bay Packers quarterback Aaron Rodgers, on Saturday that he and others should “vote Republican.”

The two men agreed that Democratic governors and state legislatures imposed mitigation measures and lockdowns that were deemed by some to be heavy-handed, such as closures of businesses, restaurants and schools.

Rogan and Rodgers also mentioned California Gov. Gavin Newsom’s outing at a restaurant where he sat unmasked in close proximity to other diners while his state banned indoor dining.

“I hope there’s lessons learned in this because this is a new thing,” Rogan said.

“We had never had this before. No one that was alive today had ever experienced a true pandemic and I’m hoping that now that this is over, people are going to recognize that some serious errors were made and not repeat those.”

The clip has now been watched a million times on Twitter. Here it is:

The usual suspects of the ‘Occupy Democrats’ have jumped on this. Note their accusations of fascism. Biden has normalized that for them.

If you support a boycott of Spotify until they drop Joe Rogan’s podcast after he just ignorantly urged Americans to “vote Republican” as payback for businesses closing down due to the pandemic — dangerous rhetoric as the GOP embraces full fascism — please retweet and follow us!

You’ll be happy to know almost every response to this can be summed up in this tweet:

On a side note, I have been meaning to tell you, dear Legal Insurrection readers, that I have joined Twitchy as a contributor, and this was actually the subject of my first post there.

I’m not leaving Legal Insurrection, I just took on another gig because I found that I have way too much free time.

Everything for the State
Nothing against the State.

Karl Marx would be proud of his children

You’re going to Twitchy? Is it something I said?

Hey, LaChance, don’t listen to PP. What the heck does HE know?? I mean, … he’s from Pasadena. It’s common knowledge that people from Pasadena are ,,, ahem, … from Passsadeeennnaa, … if you follow me!

Hello troll. You must be new around here. Or maybe a discredited former commenter returning with a new pseudonym?

These businesses must do as we wish, support the things we approve and only say things we like otherwise they are fascist/totalitarian. I’m seeing a Princess Bride situation repeating itself by the d/prog. These jacklegs really don’t understand the words they use. It’s like listening to a four year old attempting to make an argument about staying up past bedtime to eat ice cream and watch TV, cute but ineffective.

If you use Spotify, it’s time to make counter-demands. Boycotts and buycotts work.

I thought about asking our politicians to speak up, but I have repeatedly seen them do so, and then have fake accounts at Conservative sites trot out the lie that they didn’t. So, I wonder if more direct action by large numbers of mere customers might work better.

I hear that Netflix is finally getting the message about their woke programming. Their stock has certainly taken a pounding, and unlike the sexual freaks in charge of Disney, they seem to be interested in making money for the company.

Rogan has already won this battle and doesn’t care if Spotify cans him. Spotify cares. Nothing will come of this.

Interesting that Rogan said that Republicans handled the pandemic better therefore they should be voted for, and the tweet says he was calling for “payback.”

There is no logical connection between what he said and how it was interpreted.

Kind of like there being no (or an opposite) association between the name of leftist legislation and its intent or result.

Who said they use logic?

Yeah, good luck with that. Spotify just told employees that don’t like Rogan to take a hike. Rogan is on the left in most things and his comments were confined to the Dems ridiculous overreach. I listened to the conversation. Clearly he was reacting to what could be done by people that disagreed and voting for the opposite party is one way.

And they will become yearly occurrances, each successive year being worse than the previous.

The screeching by the left for Spotify to drop Rogan is as predictable as night follows day, but it will go nowhere. Joe is a very smart guy and the left wanting to cancel him over his pronouncements or comments on his show has already been litigated. It’s not happening.

If you’re referring to the NIH rumor, it’s fake news.

Heh. I completely love your comments. Droll, dry, and devastating.

I’ll see you on Twitchy, too!!

If the lefty retards think they can convince Spotify that their demands are worth more than the $100 million they’ve already sunk into Rogan then more power to them. I highly doubt they’ll do so.

Honestly speak your mind and someday the left will come for you and try to destroy you (even if you once supported Bernie Sanders as Joe Rogan did).

The left are red-pilling quite a few people with their extremist ways.

Remember, the lefties f*cked over Bernie two election cycles in a row because if they had run honest primaries he would have been their nominee in both cases.

And that would have been two opportunities for the lunatics to see how far off the reservation they’ve strayed.

And even though Joe Rogan may still have some liberal leanings, I doubt it’s lost on him that when he was supporting Bernie Sanders, people on the right were not calling for him to be cancelled.

I see nothing similar coming from the Right. In fact, just the opposite: the more radical the Lefty, the more people on the Right actually POST LINKS to the nonsense they are spewing. Because they look like raging psychopaths and normal people want nothing to do with them.

The more people, anyone, debate the issues the further to the Right they move.

Joe Rogan himself is a great example of this. He used to be very Liberal. The more he debates, the more he adopts the Right position on issue after issue.

That’s precisely what Lefties SILENCE, rather than engage, in debate. None of their positions can withstand even the slightest scrutiny.