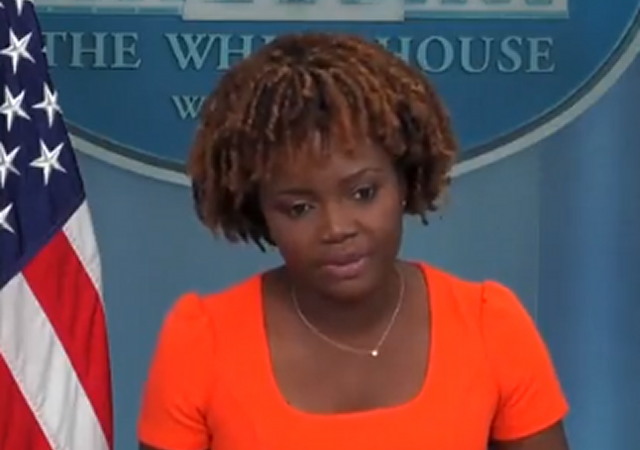 You have to admire at least her ability to lie with a straight face.

Biden’s speech was so poisonous that he tried to walk it back the very next day. Polling indicates that a majority of Americans thought it was dangerous.

Jean-Pierre is engaging in pure gaslighting.

White House press Secretary Karine Jean-Pierre said Wednesday that President Biden’s “soul of the nation” speech — in which he cast former President Donald Trump and MAGA Republicans as a threat to the country — was not divisive.

The comments came during a Wednesday afternoon press conference when a reporter asked Jean-Pierre if Senate Minority Leader Mitch McConnell should be considered a “MAGA Republican.”

Jean-Pierre declined to comment on the specifics but referenced Biden’s speech last Thursday in Philadelphia.

She said the president was talking about “a minority, a small group of people who have extreme views and who threaten that … core value of who we are as a country.”

“You don’t have to look further than Jan. 6, 2021, to see what their attack was on our democracy. It was very clear. We all saw it,” Jean-Pierre said. “And when you have people who say the protesters on that day were patriots, that’s problematic. That’s coming from leaders.”

BIDEN LAST WEEK: "Donald Trump and the MAGA Republicans represent an extremism that threatens the very foundations of our republic." pic.twitter.com/HrjNWr5P32

Jean-Pierre should look at the graphic in this Trafalgar poll. That big green bar at the top represents all the people who saw Biden’s speech much differently than she did.

Given that KJP was given an impossible job (making Dementia Joe sound reasonable or sane), she still is a true believer.

She gives a bad name to blacks and lesbians. She may check multiple boxes, but she has checked out as far as competency goes.

Somewhere, Baghdad Bob is laughing his butt off…

“It’s not a lie, Jerry. If you believe it.”
George Constanza

Bob was much more honest than that lefty KuKu.

“Jean-Pierre is engaging in pure gaslighting.”

100% pure with no admixture of truth.

If Joe Isuzu identified as a lesbian woman of color.

At least joe Isuzi was funny and likeable.

Considering the frame of reference for KJP, this is probably normal since modern democrats are divisive by nature. As for most of the country aligning with them…that’s pure gaslighting.

I honestly wonder if the Biden administration has decided just insulting our intelligence by brazenly lying to our faces is the best PR strategy given all the other alternatives.

Well, telling us the truth is probably even worse for them.

Unfortunately, a little less than half the country will repeat the Biden administration’s crap at every opportunity and worse, some actually believe it, because it’s an expression of their tribal religion to do so.

Would a guy who tried to pass off a British politician’s life story as his own, really lie to our faces?

I don’t know, is that guy also a retarded pedophile? Oh, yeah, he would.

A. We’re not a democracy.
B. The left is not a majority.
C. This woman is dumber than a post. Apologies to posts everywhere.

Apparently, someone doesn’t know the definition of the word divisive.

WHAT “attack” on January 6th?

Call these people out on their false narrative. THEY staged the “riot.”

Dems keep going on about ‘our Democracy’. How about preserving the Republic for a change of pace.

It is true, democrats are not divided, they hate with one voice.

I don’t understand why the reporters even show up. I wouldn’t go to a WH briefing and get lied to. It’s insulting. Just like the old USSR.

Most of them just reprint the talking points anyway. They are probably emailed to them.

JournoList is alive and well.

The WH briefing on Nov 9 should be interesting. We get a real time view of what the voters want. Then we can see clearly who the majority is and by her own definition who the extremists are.

Oh, of course it wasn’t designed to divide us. He only called me a clear and present danger because I filled out the wrong dot on a ballot. It is a clear indication he intends on censoring his opponents *before* they have a chance to speak against him or his agenda.

Schenck v. the United States. The test says that the printed or spoken word may not be the subject of previous restraint or subsequent punishment unless its expression creates a clear and present danger of bringing about a substantial evil.

Schenck (the “shouting fire” case) is bad case law. It was eventually repudiated by the writer of the opinion, and superseded (in fact gutted) by two subsequent and reasonably contemporaneous cases, Both of which were much friendlier to the first amendment.

Calling as many as half the citizens of the country a ‘clear and present danger’ to the nation — a carefully worded legal term that sanctions extraordinary and otherwise unconstitutional government action to mitigate the threat — is not divisive only if you live in Oceania.

Yeah, notice how Jean Pierre dismisses half the country as just a few fringe people. Division is division, even if you’re cutting off a tiny minority. But of course, she isn’t.

Is it me, or does her hair make her look like Sideshow Bob from the Simpsons?

Lord knows she is running a sideshow…

The majority of the country disagrees with PedoHitler and his spokes-retard.

“Extremism” is the new “racism” for the left.

They will try to beat the term to death and do their best to make it lose all meaning but throw a bloody fit when you don’t treat it like they are super duper serious about it.

More divisional tactics from the sowers of division.

Up next on the chopping block: “infrastructure”

Not far behind: “taxes”

“You have to admire at least her ability to lie with a straight face.”
Just having a “straight” face is another lie.

Incapable of being fired but such a Dim Bulb.

Anyone that thinks that Biden’s speech was divisive is ………….. DIVISIVE!