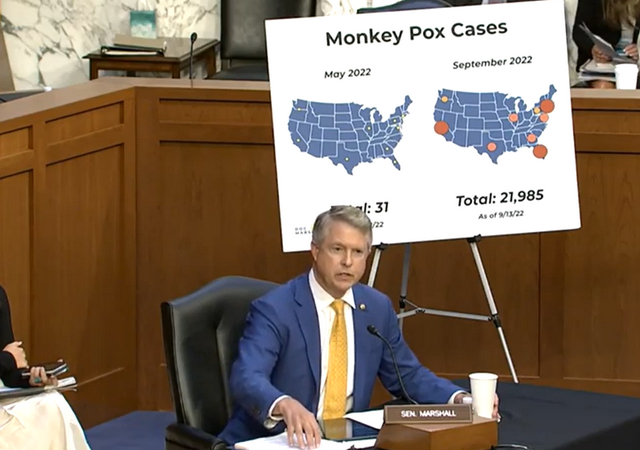 May Chastain suggested we do a series on fentanyl and methamphetamine “because the Border Patrol and regular citizens seem to find many of these drugs every day.”

I am so ready, as it appears that the covid pandemic is over.

To officially launch this series, I will turn to a Senate Health, Education, Labor and Pensions Committee hearing on the government’s response to monkeypox last week. During the session, Kansas Sen. Roger Marshall (R) questioned why the government is focusing so much on monkeypox and less on the number of fentanyl deaths caused by drugs coming across the southern border.

On Wednesday during a U.S. Senate hearing, Marshall questioned Rochelle Walensky, director of the U.S. Centers for Disease Control and Prevention, about deterrents to consumption of illegal fentanyl. He asked her to recommend the U.S. Department of Health and Human Services declare abuse of fentanyl a national public health emergency.

“Every day hundreds of Americans die from fentanyl poisoning,” Marshall said during the hearing devoted to monkeypox. “Why have you not declared this a public health emergency? Why have you not asked the Administration to shut down the border where 90% of this fentanyl comes from?”Walensky said CDC jurisdiction in terms of closing the border was limited to spread of communicable diseases rather than distribution of illegal drugs.

The exchange was intense.

Walensky responded that an emergency declaration would have to come from the Health and Human Services Secretary. Sec. Xavier Becerra declared such an emergency for monkeypox in early August. Marshall noted that Walensky could recommend that Becerra do the same for fentanyl.

“And we have had those conversations,” Walensky confirmed. Addressing Marshall’s question about a border shutdown, she noted that “our ability to shut down the border at the CDC level is related to communicable diseases,” not drug crises.

Marshall was not satisfied with that response.

Walensky replied by stating that the CDC is engaging in outreach and addressing mental health, “community violence,” as well as surveillance.

“But tons of fentanyl continue to cross the border,” Marshall said.

The measure would require social media companies and other communication service providers to take on a more active role in working with federal agencies to combat the illegal sale and distribution of drugs on their platforms.

…Marshall and seven other Republican senators sent a letter to the CEOs of Instagram, Snapchat, YouTube and TikTok last week, calling on them to identify the “steps [the] companies are taking to protect children and crackdown on illegal drug sales on [their] platforms” and “[recognize] the role [the] platforms play in the evolving illicit drug ecosystem.”

Given how responsive the CDC and social media platforms have been to the reasonable concerns of worried parents, I don’t anticipate the surge of fentanyl to be declared an emergency any time soon…at least, not before next January.

Monkeypox must be stopped because it hurts a protected class

overwhelmingly white youth are easy pickings and a win win

Get with the program Marshall!

Eh, fentanyl is the bigger issue totally agree – but why would we want the CDC to declare an emergency?

How about no more health emergencies ever.

2- CDC did a horrible job with its last two health emergencies.

Why ask them to make the situation worse? Monkeypox btw should have been shutdown easily, but wasn’t. Maybe it’s because they want an emergency …

Fentanyl is not an infectious disease. Let’s stop mission creep and see if they can do their original mission. Which right now they can’t

4- Billions will be wasted

The real point of emergencies is to abuse power and make lots of money on huge slush funds with no accountability.

(Fentanyl is a serious serious issue promoted by China to undermine our nation. It’s not a disease, it’s covert warfare)

Obama tasked the CDC with tackling the “epidemic” of obesity, and also with “solving” the gun control issue.

Then, the SARS epidemic hit, and swine flu, bird flu, and ebola. And the CDC completely failed in every conceivable way on each. They even managed to fail in ways no one could have imagined.

How many people died with (not from) Covid compared to fentanyl.

Please note that both originated in China….

More people will die from fentanyl this week than have died FROM the FauciFlu.

NEVER grant the CDC authority over anything, particularly an “emergency”.

The D in CDC stands for DECEIVERS and DECEPTION.

Its killed far more people than the WuFlu.

The federal government would love to empower the CDC vastly beyond its original goals.
Because they see “public health” as the ultimate end-run around the constitution.
I’ve been saying this for the past three decades. COVID proved it conclusively, and yet conservatives still can’t see it… any more than they notice that Katrina totally exploded their foolish assurances that “cops will never obey clearly unconstitutional orders.”

Anyone that wants to be the next George Floyd ought to be free to overdose just like he did.

If the current administration were to take a hard line on Fentanyl and all the other like drugs they would have to take a hard line on our Open Border crisis. They point fingers against the conservative populace and accuse how inhumane it would be to close the border to the 4+Million who have crossed in illegally, Yet the current admin. do not see their own inhumanity of allowing the drugs to come in over the border with no plan or policy to curb it let alone stop it. 2021 recorded over 100,000 who died as a result of O.D’.ing with Fentanyl and Fentanyl laced drugs directed to our young adults/children. We have a total Democrat dominated government and they have failed to acknowledge we have a war going on within our own borders. The progressive only has one agenda and that is to hold onto dominance in government, not for the people they govern, but for the power that entitles them to control the direction of government, What they have failed to realize is with that power comes responsibility which is sorely lacking. They have turned their backs away from the realities with an idealistic attitude of what it means to be “in charge” is about. Our population is not going to win this battle against drugs until we secure the enemy at the border and this will not happen until we have at minimum 8 consecutive years with a majority legislatures and a Republican in the White House. Kudo’s to Sen. Marshall for stepping up! We now need another 51 of him.

10 hippies OD’d in 1969 and Neil Young wrote a hit song about it. Somehow we don’t see that happening this time around

Stop handing out Narcan sniffers and the problem will be quickly self-correcting. “Harm Reduction” should be more correctly called “Harm Prolonging.”