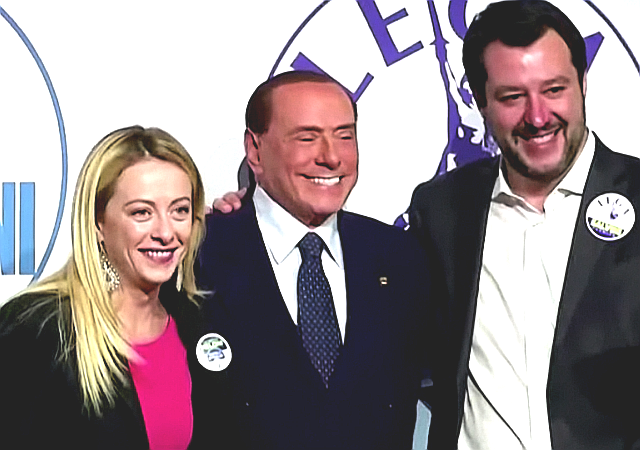 The three-party bloc led by Giorgia Meloni is “expected to win more than half of the seats in parliament,” German public broadcaster Deutsche Welle reported Sunday night.

“First projections showed the alliance led by Meloni’s Brothers of Italy party securing 41-45% of the vote. Meloni’s own party had 22.5-26.5% of that by itself, as the strongest single group in the polls,” the German broadcaster added.

The BBC also quoted “Several exit polls” showing right-wing alliance in “a commanding lead, with 41-45% of the vote.” Such an outcome will give “three parties control of both elected houses of parliament.”

EU27: exit and instant polls in Italy indicate that the next Italian European Council (EUCO) member will likely come from a right-of-centre party after today's election.

It could make the national-conservative ECR the second-strongest grouping in the EUCO by population. #EUCO https://t.co/WFGVWKaARi

EU, Mainstream Media in Fury Over a Possible Right-Wing Victory

The Italian election was marred by massive media smears and European Union-led fear campaign to intimidate the voters.

Days ahead of the vote, the European Commission President, Ursula von der Leyen, threatened Italians with consequences if they dared to elect the ‘wrong’ sort of government. “If things go in a difficult direction – I’ve spoken about Hungary and Poland – we have tools,” German Chancellor Angela Merkel longtime confidant Von der Leyen warned.

Unelected official Ursula von der Leyen of the European Union, openly warns that if Italy votes for someone they disagree with, they will sanction Italy.

With Italy’s right-wing bloc within reach of power, the mainstream media has already begun maligning the future government.

Italy shed the parasites of the EU. Grande!

Watch: Liz Cheney will threaten to renounce her Italian citizenship and join the communist party.

Btw: Italy better get its nuclear weaponry program back on track. Kim Jung Il is a monster, but he has one thing right: North Korea will remain North Korea because it has a nuclear deterrent.

The EU will declare ecomomic war on Italy, just as they have on Hungary and Poland.

Europe should collectively cancel the EU, pull their plug and maybe try EU leaders for crimes against the people.

So now might be a good time to create a right wing block with Poland and Hungary eh.

The EU is just a socialist organization.

Much like Dems are today. Many of the same tactics.

I’ll bet she didn’t run on being a woman.

I bet she doesn’t have a black pantsuit aka “Ol Kristy”.

I think you misspelled ‘Krusty’

Italy has very little power in the EU. Wake me up when France or Germany wake up.

The fewer countries they have to leech off and push around, the less power they will have and the more money their own citizens will have to contribute.

Germany provides the skin for Italy to leech. You have it backwards on that one.

Push around, yes, but Italy is going nowhere without the EU because they have neither the stones nor the economy.

How is it that out-and-out socialists are referred to in the media as “progressives” (e.g., Brandon, The Ho, Pelosi, and Schumer), while mainstream conservatives are referred to as “far right wing”? The media is horrible and is contributing to the death of our republic.

Horrible is not the right descriptor for the media. Deliberate is that word. The MSM is a major cheerleader for the NWO and total government.

Even the author of this article falls for it, “Italy’s right-wing alliance is set to win Sunday’s election, first exit polls show.”

The ‘progressive’ tag is a smoke screen. It is a lie and a cover name for crypto-commies.

Unelected EU overlords, and Klaus Schwab, will not be pleased?

The EU needs to be ‘reimagined’ and stripped of much of its illegitimate power. Unelected bureaucrats and administrators should not rule the populations of dozens of nations by decree. They are not aristocrats. They exist only to serve the citizens of those countries.

Wait till the lights go off and European citizens are potentially sitting in dark, cold homes this winter. The EU hasn’t seen pushback yet. Hungary, Sweden now Italy have rejected the left/center left parties and moved rightward. Others will follow. The Dutch Farmers are still protesting. UK ratepayers may boycott utility payments. Much more to come.

When the lights do go out the media will blame it on the right instead of on the insane EU policies that created the outages.

At that point the media will be largely irrelevant. The issue is simple enough to understand. Each nation requires X GWH of electricity production to maintain the grid. The environmental whackos want to reduce the amount of GWH of available electricity.

Artificial scarcity applied to electricity production, home heating fuels and industrial energy needs isn’t difficult to grasp. One group wants this so we all know who to blame. No media required. Sure the media will attempt to spin it but who will still be listening, especially when there’s no electricity to power the TV?

The EU morphed from a national “mutual aid society” and co-op into a continental over-government so slowly… oh wait not slowly at all.

The EU bureaucracy should be put down, people of the EU would be much better off.