There are reports of residents being trapped and the 911 system being down in some areas. 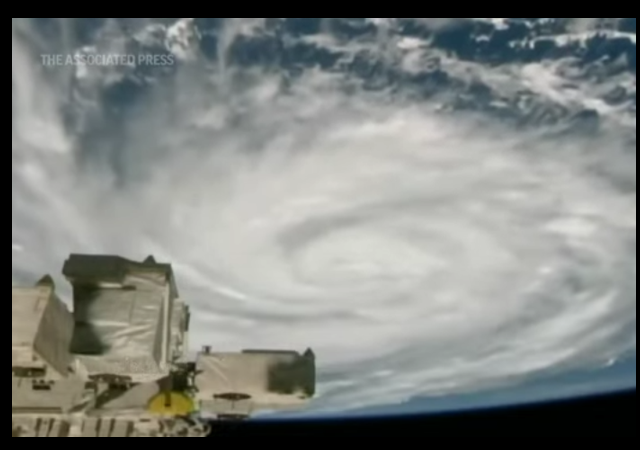 Hurricane Ian, a Category 4 storm that is perilously close to a Category 5 rating, slammed into the West Coast of Florida, sending a storm surge that flooded areas along the coast and cutting power to one million residents.

Fort Myers was one of the first cities to be battered by Ian, with apocalyptic images from after the initial surge showing homes decimated by its wrath as roads turned into rivers with the tsunami of floodwater.

Meanwhile Naples and Sanibel Island were also rocked by the ‘historic’ hurricane, with houses overwhelmed by water, debris flung through windows and some even ripped from their hinges.

Locals are reporting that hundreds of people in Naples are stranded on their rooftops, with the population of the town being made up mostly of elderly residents.

And in Martin County, the sheriff’s office confirmed that this morning the body of 34-year-old construction worker Cody Dudek was found face down near Palm City.

Across the state 1,103,460 households saw blackouts and Ron DeSantis said during a lunchtime update he expected the number to reach the millions as well as $45billion-worth of damage.

Video shared on social media show the magnitude of the surge.

Elsewhere in Florida, some residents took advantage of the conditions for some fun and games.

And there are sharks in the street!

Interestingly, in the face of such a disaster, the left still obsesses about….President Donald Trump.

Trump’s Mar-a-Lago faces dual threat from tornados, Hurricane Ian. Let me see if I can gather some thoughts and prayers. https://t.co/8npxbOfwRW

There are reports of residents being trapped and the 911 system being down in some areas.

“We are in call triage mode. We are getting a significant number of calls of people trapped by water in their homes,” the Collier County Sheriff’s Office said in a Facebook post Wednesday.

The 911 system in Lee County, Fla., is down and rerouting to the system in Collier County.

There may be some good news. Florida Gov. Ron DeSantis indicates the deadly storm surge may have peaked.

Speaking at a press conference, DeSantis said the storm surge has likely peaked but has done a lot of damage and is going to continue moving through Florida.

…He predicted that Hurricane Ian would “rank as one of the top five hurricanes to ever hit the Florida peninsula.”

DeSantis said he had sent a letter to the Biden administration for a major disaster declaration for all of Florida’s 67 counties requesting the federal government do a 100% reimbursement up front for 60 days to help the state move forward with its response and recovery phase.

On recovery efforts, DeSantis said Florida has nearly 250 aircraft, more than six hundred high water vehicles and more than 300 boats of all drafts and sizes, including 250 already stationed in the major impacted areas and nearly 50 that are staged and ready at a moment’s notice.

For perspective, here is video of Ian taken from the International Space Station.

Neighbors helping neighbors and the Cajun navy will probably do more good than any government during the next 24 hours.

Looks like the worst of the wind is over.

In Central Florida, Ian is now (as of 6:30 a.m. Friday) a Tropical storm, but there’s a tornado watch all through the greater Orlando area.

The Jacksonville area, with its’ many waterways. i.e. The Atlantic Ocean (and its’ over 40 miles of coast line) The St. Johns river, estuaries, streams, lakes and retention ponds, will experience flooding between this afternoon and tomorrow morning.

Welcome to CA. Here we lose our electricity because PG&E or SoCal Edison start forest fires or it’s too hot or a little too windy (fear of poorly-maintained power lines breaking) or just because.

On the other hand they have nice weather while you’re having lousy weather most of the time.

They need the Redneck Navy.

apocalyptic images from after the initial surge showing homes decimated by its wrath as roads turned into rivers with the tsunami of floodwater
SOMEbody likes apocalyptic metaphors. (And who probably doesn’t know what ‘decimated’ actually means.)

stranded on their rooftops, with the population of the town being made up mostly of elderly residents
Well, they’re fit old people if they managed to climb onto their roofs.

The downgrade to Tropical Storm happened last night. This thing died fast. There’s still a lot of rain to be expected across a wide swath, but the really bad stuff seems to have been somewhat localized to one section of Florida. Hence, this storm will be soon forgotten, if DeSantis doesn’t do anything stupid.

I should specify: forgotten by the media. Not by those who went through it.

Bless and keep them….

I had a home in Florida.. right up until Charlie.. I know.. I know…