DC and New York are the worst. 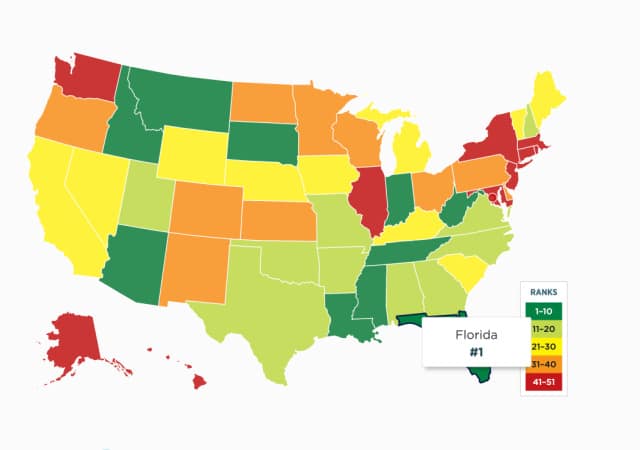 “If sunlight is the best disinfectant, it’s no wonder why the Sunshine State is one of the freest states for teachers and children to pursue an education that is largely devoid of red tape,” stated Heritage Foundation president Kevin Roberts. “Florida has led the way in expanding education choice, cutting red tape, and holding schools accountable to parents with academic transparency.”

Heritage Foundation used four categories with many factors to rank the states:

Florida landed in the top 10 in each category.

Lindsey Burke, director of Heritage’s Center for Education Policy, said: “Florida lawmakers set a high standard for academic transparency and rejecting critical race theory’s pernicious ideas. An impressive 42% of Florida teachers are alternatively certified, making their way to K–12 classrooms through means other than a traditional, university-based college education. If you’re looking for a state that supports families when it comes to directing the education of their children while keeping red tape and spending low, look no further than Florida.”

Missouri, which enjoys mostly decent ranking in the top ten in three categories, is dead last in transparency: “Missouri lawmakers have not adopted proposals to increase academic transparency or that reject the prejudice caused by the application of critical race theory in schools.”

Oklahoma, my state, is similar. It is ranked in the top 10 in three categories except for transparency because of a messed-up proposal: “In 2021, Oklahoma lawmakers adopted a proposal that rejects the application of critical race theory in K–12 classrooms, but this proposal also bans the discussion of certain legitimate ideas and materials in schools. Such provisions can create confusion among educators and students, and Oklahoma lawmakers should replace them with provisions that declare that no teacher or student shall be compelled to affirm any idea that violates the Civil Rights Act of 1964.”

Only Mississippi beats Florida in the regulatory freedom rank. But hey, #2 isn’t that bad:

The Sunshine State ranks second in regulatory freedom, making it one of the freest states for teachers and students to pursue education largely devoid of red tape. An impressive 42 percent of Florida teachers are alternatively certified, making their way to K–12 classrooms through a means other than a traditional university-based college of education. The state has full reciprocity of teacher licensure, allowing anyone with a valid teaching license from another state to teach in Florida, or anyone who holds a certificate issued by the National Board for Professional Teaching Standards. Florida does not use Common Core–aligned tests. Despite its #2 rank for regulatory freedom, the Sunshine State has room for improvement: 42 percent of its school districts with more than 15,000 students employ a “chief diversity officer.”

Florida can maintain its #1 ranking by limiting growth in non-teaching staff, particularly chief diversity officers, and continuing to embrace alternative routes for teachers to K–12 classrooms or by ending certification requirements altogether.

New York, New Jersey, and the District of Columbia landed in the last three spots.

If you have to live in a blue state, and have traditional moral values and cherish the uniqueness of America-you have to seriously think about home schooling or sending to a private or parochial school to ensure that your kids will emerge with your values as opposed to being trained and groomed as radicals in the woke values

Caveat: If you choose a private or parochial school, you still have to monitor exactly what it is they’re trying to insert into you kid’s brain.

Just as long as they don’t equate “freedom” with “quality”.

That would require ditching the teacher’s unions.

Many people don’t really want freedom because it comes with responsibility for their choices. Sad but some folks want to be drones because they are too afraid of the alternative.

We’re still too cowardly to admit that voluntary indentured servitude is an idea that still has a valuable place in society.

Mississippi is 6th on the list. I know it’s not a measurement of educational quality. Perhaps it has merit. But if your state is one of the worst ranked states in the country for quality, it’s hard to take this ranking as especially meaningful. Maybe it’s a good starting point, but then again Miss hasn’t shown improvement in decades.

Sorry to pick on Mississippi, but it’s a good example. Louisiana is near the bottom of educational quality and still in the top ten here.

Maybe the freedom is a good thing, so parents can get their kids into better schools.

A long time ago, one of my field assignments took me to DeSoto County MS. I know it’s just one county, but their schools seemed remarkably good. I was in and out of classrooms doing my work, and I heard teachers actually challenging their students. Asking questions, and there were some great back and forth discussions and debates going on. I felt like I was in the classroom of a good college.

Other schools in the district… the teachers had long ago given up, and had daytime garbage on the classroom TV. They weren’t even trying to teach. Probably 25% of the female students were knocked up, the boys were loud and nasty. (Tell me again why school attendance is compulsory!)

I am for freedom and liberty to the nth degree. No quarrel with allowing parents the freedom of choice is educating their children.

What I’m opposed to are failing teachers, failing schools, failing school systems, and the failure of the government that runs them. Every democrat run city has a failed system with failed teachers. There are always exceptions of course.

The problem is not enough freedom. Let each parent take the appropriated money and spend it upon the education of their choice.

The wealthy in Mississippi send their children to private school. I’d make it possible for every child to attend a private school if they so desired. Crap public education would die quickly were that the case.

Then we’ll have freedom, and children getting an education.