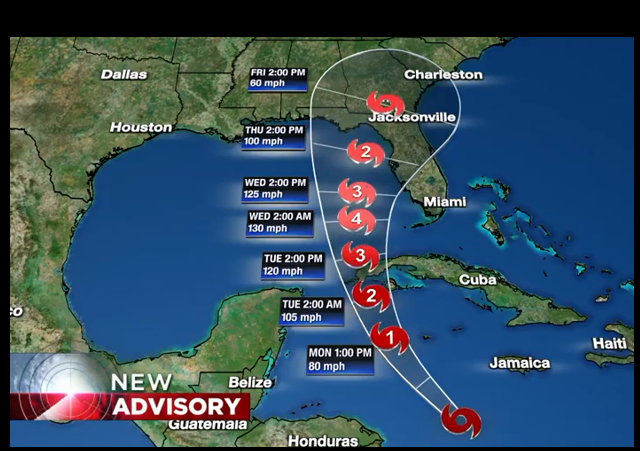 While this year’s hurricane season started slowly, it appears to have picked up steam.

Gov. Ron DeSantis declared a state of emergency for all of Florida as Tropical Storm Ian intensified over the Caribbean and is on track to become a major hurricane before slamming the state.

DeSantis had initially issued the emergency order for two dozen counties on Friday. But he expanded the warning to the entire state, urging residents to prepare for a storm that could lash large swaths of Florida.

“This storm has the potential to strengthen into a major hurricane and we encourage all Floridians to make their preparations,” DeSantis said in a statement. “We are coordinating with all state and local government partners to track potential impacts of this storm.”

…The National Hurricane Center said Ian was forecast to strengthen before moving over western Cuba and toward the west coast of Florida and the Florida Panhandle by the middle of next week. The agency said Floridians should have hurricane plans in place and advised residents to monitor updates of the storm’s evolving path.

Meanwhile, supermarket shelves across the state have been stripped bare as Floridians prepare for the first major hurricane to land there in four years.

Photos from the weekend showed lines of Floridians stretching back from supermarket registers through aisles stripped bare of bottled water and other essentials.

Shots from one Florida Costco showed an individual with two industrial sized pallets piled high with cases of water, while at Home Depot and hardware store’s people flocked to the construction materials aisle to load up on planks of plywood to board their windows up with.

Tropical Storm Ian is expected to strengthen into a hurricane on Sunday and reach ‘major’ hurricane strength – anything Category 3 or above – on Tuesday before it hits Cuba.

Just wanna give a shoutout to all you Water Hoarders out there.🖕 It’s Hurricane Panic Shopping Season. This Publix was out of water, just like Walmart and every other grocery store on The Spacecoast. #florida #hurricane #ian #hurricaneian #nftcommunity #nft #spacecoast pic.twitter.com/RtTtT93oX1

Not all the news is terrible, however. Biden canceled a trip to Fr. Lauderdale.

Biden had been set to appear Tuesday afternoon at the Harold and Ted Alfond Sports Center at Rollins College in Winter Park, according to organizer Jose Nunez.

The event would have also featured comedian Keegan-Michael Key.

The proposed September 27th launch of Artemis I was also scrubbed because of the weather.

The launch was scheduled for Tuesday, but NASA announced on Saturday that it had decided to postpone the mission in response to Tropical Storm Ian, which threatens to hit Florida next week as a hurricane. The Kennedy Space Center is located on Florida’s east coast.

The space agency said the decision was made to protect its employees and the needs of their families while also maintaining a possible future opportunity if weather predictions improve.

Prayers are being sent to all our fans in Florida!

Can he put the storm on a bus for Rehoboth?

Wait until they see the Brandon prices on that plywood!!

Which begs the question: where does all the plywood go from all the previous boarding up events??

It may be a Katrina:
OTOH it may just be a Chicken Little

Well, help your neighbors if you’re in that area. But don’t count on Brandon the pedophile to lift a finger to help/

Apparently Florida has an “emergency carry law.” It allows every eligible (age, record) Floridian to carry a gun for 48 hours when the governor invokes it, and the governor can extend it if the emergency continues.. DeSantis invoked it for the hurricane.

I’ve never heard of such a law. Of course, if Florida got off their ass and passed constitutional carry, as half our states now have, they wouldn’t need it.