As estimated 70,000 people took to the streets of Prague for the “Czech Republic First” demonstration. 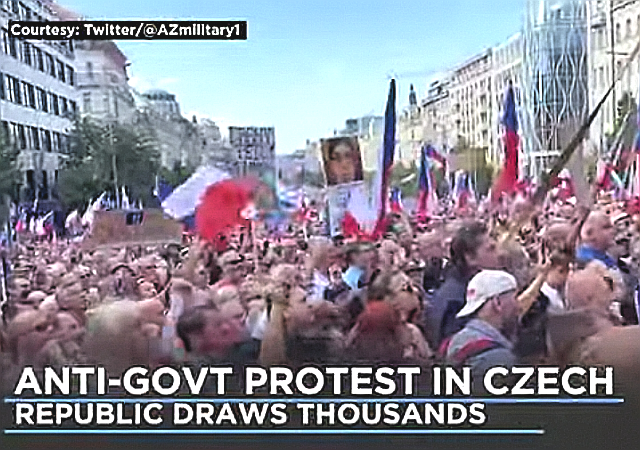 BREAKING: Massive demonstration in Prague in the Czech Republic against the government, soaring prices and the energy crisis.

The mass-demonstration took place as Russia shuts down its main natural gas pipeline to Europe indefinitely, plunging the continent into an even deeper energy crisis. “The Russian energy major [sic] Gazprom extended the shutdown of gas flows through its key Nord Stream 1 pipeline to Germany on Friday evening, providing no timeframe for a reopening,” the British newspaper the Guardian reported.

Before the Ukraine war started, Russia supplied the EU with 40 percent of its natural gas consumption. With Moscow now cutting almost all supplies, the energy prices across the EU are skyrocketing ahead of the winter.

Tens of thousands of protestors from both the far right and far left demonstrated against the Czech government, EU and NATO on Saturday.

An estimated 70,000 people took to the streets of Prague, calling on the ruling coalition to bring energy prices under control while voicing their opposition to the European Union (EU) and NATO.

An estimated 70,000 people took to the streets, according to police.

Some of the groups at the protest were the anti-migrant populist Freedom and Direct Democracy party, alongside the Czech Communist Party.

“The aim of our demonstration is to demand change, mainly in solving the issue of energy prices, especially electricity and gas, which will destroy our economy this autumn,” event co-organizer Jiri Havel told local media.

The protesters demanded the resignation of conservative Prime Minister Petr Fiala, criticising his coalition government on a number of issues, while slamming its Western-oriented policies.

Demonstrators gathered at Wenceslas Square in the city centre, one day after the government survived a no-confidence vote amid opposition claims of inaction against inflation and energy prices.

Much like the Democrats and the mainstream media in the U.S., Czech Republic’s pro-EU coalition government dismissed people’s legitimate protest amid skyrocketing energy costs as “Russian propaganda.” “It is clear that Russian propaganda and disinformation campaigns are present on our territory and some people simply listen to them.” Czech Prime Minister Petr Fiala warned.

It is worth noting that it was the European political class which surrendered the continent’s energy lifeline to Moscow. It is not the ordinary Czechs (or Europeans for that matter), but Europe’s ruling elites who had been duped by Russia.

The Czech people, who valiantly fought against Soviet imperialism, have been at the forefront of resisting EU’s authoritarian rule. The country’s outgoing right-wing government—replaced by a pro-EU coalition in the 2021 election—was among the few who rejected Brussels’s demands to accept immigrants based on an EU-wide quota system.

(Raw footage of the demonstration)

The first crack in nato unity?

Not the first, not the last., not NATO, the EU.

No sympathy. The Czechs voted for their current government. They voted out the “right-wing” government that had been resisting the EU. Now the people discover that the EU doesn’t have their best interests at heart.

Should have considered that before the election.

Over Covid responses, please stop insulting nations you know nothing about. If the EU/energy stuff had been an issue the outgoing government would have won.

But is was an issue. Trump knew it was an issue years ago when he warned Germany about over-reliance on Russian energy. How was this not an issue?

1. Are you telling me the pandemic didn’t change the votes of 20k people in Wisconsin? If not Trump lost for a similar reason.

2. The Czechs voted for a government that worked very closely with Trump and was one of the friendliest to Trump while he was in office. That same government tried to contain the virus by every means necessary and failed.

Put two and two together. When the issue was what you stated the Czechs voted for the right side of it; when the issue was covid…….just look at reporting on what happened in the Czech Republic during it you will find that is the reason.

The British won’t be far behind. They are seeing record increases in energy prices.

70% of all British restaurants are expected to close permanently.

They voted out common sense and voted in nonsense. Not good, but they are getting what they voted for. Unfortunately, I don’t know if there’s anything we can do to help my wife’s family in Brno, perhaps sending money but that looks like it will be of limited value.

Progressives decided to quit doing what works and just do what sounds good.

They never think past the nose on their face.

It’s FEELS good. FEELS.
Did you forget all those posters already?
(Or maybe you’re too young.)

What are the chances we start seeing actual revolution as people starve and freeze this winter?

What are the odds Russia realizes this powder keg has been filled and drop a match?

If Vlad Putin is indeed the evil, diabolical genius that some proclaim him to be, the question then to be asked is why so many world leaders are playing into his hands?

It’s like every world leader has secretly been taking governance lessons from Marie Antoinette, and we’re just discovering it now.

Or dementia Joe Biden. He single handedly caused energy prices to skyrocket on his first day in office. Now the whole world is paying the price for we Americans inattention to election security. Putin is laughing as he becomes rich from the idiocy of the “Empire of “Lies.”

Hm.
If we started referring to Biden as “Joe Biden, the Great Satan,” quite a few leftist heads would explode.

Sounds like a plan. Unfortunately exploding heads is a figure of speech and not an actual event.

Yeah but it’s easily rejected.
On the other hand, Leftists deep down agree that America is the Great Satan, and this just rubs in the salt that Biden is America now.

“The country’s outgoing right-wing government—replaced by a pro-EU coalition in the 2021 election…”
wonder if that was anything like the U.S. 2020 election? did they also have mail-in ballots? what was the name of the computer firm? Dominion?

A Green Slavic Spring, a Slavic Spring in Kiev, and transnational ethicists with redistributive dreams and collateral damage.

All governments are “of the people, by the people, for the people”, or precarious. Various overlords are finding that out. If your thuggery can’t take care of the people well enough, they’ll find soeone who can, even a thug.

“An estimated 70,000 people took to the streets of Prague”

Based on the overhead photos I’ve seen that looks like way more than 70,000 people.

What does it say about EU leaders that they willingly made their people hostages of Putin?

When spinelessness, and creating later crises to not waste go hand in hand, the insulated in charge will do literally anything.

Arguing from consequences does nothing for the people insulated from them. (Like who’s gonna get cold in Germany this year?)

They’re all about fixing climate change, because they’ve got seats on John Kerry’s private jet to Davos.

Warned repeatedly that relying on Russian energy, the European political elite willingly placed their neck in the hangman’s noose, and the hangman tightened it.

Too many Europeans thought that surrendering their national sovereignty to the elite technocrats in Brussels would work. No nation can exist without the ability to control its borders, judicial systems, energy, and foreign policies.

The citizens of Europe are facing a long and cold winter. Europe will be plunged into recession and possibly depression. A winter of discontent with the possibility of ‘mostly peaceful’ demonstrations. Now that they’ve danced, they have to pay the band.

High energy prices is exactly what the Globalists leaders want. The WEF has influenced a lot of government officials in many countries. MAGA is one counter reaction. Dutch farmers protesting regulations is another. This protest may be one too

The Czechs voted out the government that attempted to protect them from the monsters in Brussels. The only way they can restore sanity is to seize the Soros idiots they allowed in and chop their heads off.