“But in today’s world, when truth conflicts with narrative, it’s the truth that has to apologize” 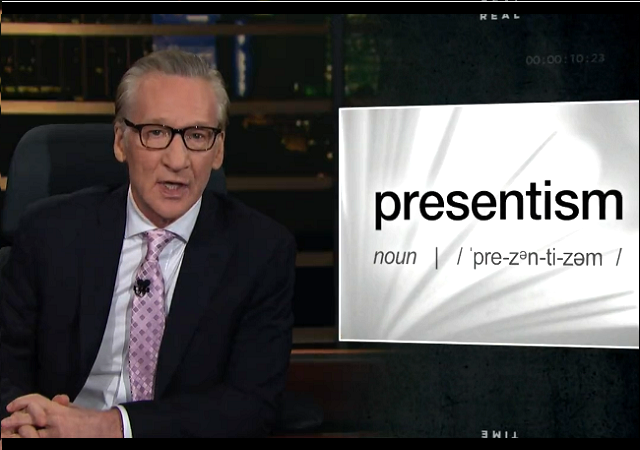 Bill Maher took on “presentism” in a recent show, and it was spot-on.  Presentism is the focus on the present and the viewing of the past through the lens of present values and ideologies and as such erodes history, the study of history, and the potential for learning from history’s mistakes.

Presentism is the inability to conceive of a culture or society different than one’s own without it being automatically inferior and worthless. And therefore feeling justified in using one’s own current worldview to judge—and condemn—all past historical eras, persons, and events.  It’s typical solipsism, really, and it’s not uncommon in first-year college students.

The trouble is that colleges and universities no longer teach students to think critically, to step outside their own heads and experience, and to understand concepts and values that existed prior to the present historical moment.  So these students remain emotionally- and developmentally-stunted, continue to be solipsistic, and become intolerant of anything that is not closely aligned with or an exact reflection of their own values.

Maher did a great segment on this concept and why it’s problematic. The segment is pointed, often funny, and has enraged the left.

In today's world, when truth conflicts with narrative, it's the truth that has to apologize. #Presentism pic.twitter.com/G8F69j4pCR

On Friday’s broadcast of HBO’s “Real Time,” host Bill Maher stated that while some conservatives do want to whitewash the past, “plenty of liberals also want to abuse history to control the present,” through presentism and acting as through “the capacity for cruelty” is “a white thing.”

Maher began by saying, “How we teach our kids history has become a big controversy these days, with liberals accusing conservatives of wanting to whitewash the past, and sometimes that’s true, sometimes they do. But plenty of liberals also want to abuse history to control the present, and last month, a scholar named James Sweet caught hell for calling them out for doing just that. He criticized the phenomenon known as ‘presentism,’ which means judging everyone in the past by the standards of the present. It’s the belief that people who lived 100 or 500 or 1,000 years ago really should have known better, which is so stupid. It’s like getting mad at yourself for not knowing what you know now when you were ten.”

This is just another example of how far academia has fallen. False confessions extracted from people who dared speak truth to the power that runs campuses, a power not very interested in the truth, but as Hannah-Jones admitted, seeks to frame narratives.

Liberal comedian Bill Maher roasted the woke concept of “presentism,” where historical figures and events are judged in the prism of the present – further arguing against the oft-claimed leftist position that White people are usually to blame for history’s lesser moments.

“New rule: You can get creative with a novel, a TV show or a movie, but history books – that’s not supposed to be fan fiction,” Maher said on “Real Time.”

The host added that gradeschool history class has indeed become controversial as of late, however also pushing back on both ideological sides of that controversy.

“[L]iberals [are] accusing conservatives of wanting to whitewash the past — And sometimes that’s true, sometimes they do. But plenty of liberals also want to abuse history to control the present.”

. . . . Maher pushed back on assertions that slavery was basically unique to America, pointing out the root of the term is Slav – adding that Slavic people are not Black.

“Slavery throughout history has been the rule, not the exception,” he went on, adding that human capacity for cruelty is just that – human – and not explicitly White.

“But in today’s world, when truth conflicts with narrative, it’s the truth that has to apologize – Being woke is like a magic moral time machine where you judge everybody against what you imagine you would have done in 1066: And you always win.”

Maher is right, of course, and it’s a shame that colleges and universities are not only encouraging narrow-mindedness and intolerance but are actively working to instill it in students.

These students then go out into the world with the same childlike, naive, self-centered belief system they entered college with, only now it’s turbo-charged with self-righteousness and leftist activism.  It makes sense, though, emotionally and intellectually mature people reject radical leftism as the tyrannical totalitarianism that it is, so ensuring that the next generation remains emotionally and intellectually underdeveloped is important.  Cruel, self-serving, and cynical, but important.

What are you going to do about it, Maher? Vote Republican?

No, you’re going to line up and slavishly vote for every single one of these far-left insane jackasses, like you always do.

Correct. He wants just enough freedom to continue being the jerk he is. There is good selfish and bad selfish. I see him preferring the latter.

Maher may very well vote Republican. He was a lot more sane in his Politically Incorrect days.

He may not change his one vote, but shining a light on the hypocrisy will hopefully change other votes.

Just like sending migrants to sanctuaries, only to see the how fake the welcomers really are.

Where is Dennis Miller when you need him?

“Presentism is the inability to conceive of a culture or society different than one’s own without it being automatically inferior and worthless.”

But… but… that’s PRIVILEGE…!

White socialist privilege? Is it paired with their eternal “white guilt?”

You know, the “white guilt” that is enough to get you shunned or not hired, while preserving their jobs?

Presentism isn’t just about condemning the past.

It’s about using it to punish the innocent descendants in the future. Everyone should be appalled by this but lots of people have lost their minds due to tribalism.

It is also designed to elevate the crackpot ideas of leftists to a level of “acceptance.”

Woke is a joke.

The past is a foreign country. They did things differently there.

Bill must be getting scared

It he has supported and encouraged the lunatics, even giving millions to their causes

Maybe he’ll decrease his donations, but I doubt it

Historical people were not children, contrary to his analogy to childhood. They were as smart as you.

What the woke lack in that respect is a historical imagination.

Why was there slavery? In an economic system that relies on hitting the guy on the head and taking his stuff, slavery is a win=win. You enslave the defeated enemy rather than killing him. It offset the huge cost of defense in such an economy, which otherwise destroyed most of the capital.

In a rule of law free market economy, a gift of the West to the world, a slave contributes more working in his own interest than working as a slave, and the practice became obsolete. It persisted for a while justified by various bad reasons (“naturally enslaved people”) but the practice was doomed.

Imagine that, for example.

“What the woke lack in that respect is a historical imagination.”

They substitute fantasy and fanaticism for imagination.

Coleridge mocked “moral discoveries,” morality being eternal and new stuff being shallow fads posing as morality. He wrote op-eds for a couple of decades but I think that one was in The Friend.

So much history has already been lost in the destruction of ancient libraries and cities to leave no stone on top of another. Yet today, we build “great” edifices that will certainly be toppled in short time to make way for something better or simply collapse in one or two hundred years. Nothing that is being built today will still be in use like so many ancient Greek and Roman buildings today. They built things expecting them to last forever.

Everything we make today is trash temporarily piled up for short term use and quickly replaced to be sent to the trash heap. It is not designed to last. The Greeks and Romans left much of their accomplishments behind for in ruins but we BUILD ruins.

We arrogantly look at these ancient civilizations as if there is nothing they did we can’t do better. We keep finding amazing constructions from the ancient past that puzzle us. How can people who had crude tools and little or no math or written language build such things? ‘I don’t know therefore ALIENS!” The idea that they were way ahead of us in any way is just inconceivable and unacceptable. We aren’t as smart as we think.

We have been digitizing all of our “knowledge” onto electronic media for storage and easy access while increasingly banning the written and spoken word. We are again burning books. Digitized media is much easier to control. Carrington event, nuclear war, or some merely presses the wrong button and suddenly all is lost. All of it. All of our accumulated human knowledge wiped out.

If some of us survive this, we then return to the most ancient method of oral tradition to pass along our knowledge and wisdom, the original medium which allowed learning to be past on to future generations. Of course, most of this has already disappeared forever.

Presentism may be expedient in a world where no one is allowed to ask “Just because we can do it, should we?” anymore. But abandoning our search for the most efficient ways to live happy, meaningful lives, we’ve become too “smart”. The Science keeps finding better and better technology that could serve our highest ideals but in the end, it gives way to how so few can control the many. Suicide is always easier than slowing down to think things through. It’s expedient.

“We arrogantly look at these ancient civilizations as if there is nothing they did we can’t do better. ”

Agreed. I look at those self appointed leftists that want a “living, breathing Constitution,” as though 1) there was no mechanism in place to make changes; and 2) that they are even remotely qualified to improve it in any way. Honestly, do you think there are a group of patriots today that could conceive of a document so effective and important?

I think not. They would just delete God and add gender garbage.

Reading the comments to Maher’s tweet reinforces the insanity of the woke Left. I continue to fear for our future as a single nation – the divide is becoming nearly insurmountable.

Mr. Darwin, your table is ready….

Presentism appears to be a new term for Chronological Snobbery.