Beyond horrific since a baby born at 22 weeks can survive outside of the womb. 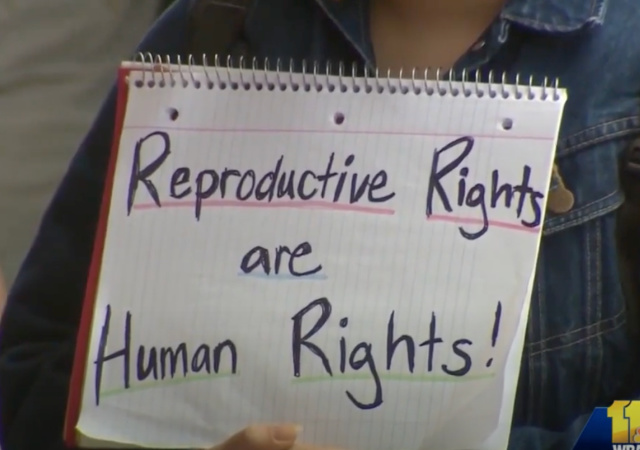 Partners in Abortion Care will open in College Park, MD, sometime after Labor Day. The co-owners hope to expand across the country.

The clinic will provide abortions in all trimesters.

The clinic will kill a baby when the baby can survive outside of the womb.

This is beyond disgusting and horrific:

When it opens sometime after Labor Day, Partners in Abortion Care will be one of only a handful of clinics in the United States that offer abortions into the third trimester — in this case, up to 34 weeks’ gestation. A full-term pregnancy typically lasts 40 weeks.

The clinic expects to treat an influx of patients coming north from states with abortion bans enacted after the Supreme Court decision in June that overturned Roe v. Wade.

All-trimester abortion care “is a really politicized topic,” Horvath says, “and it shouldn’t be. Every time we draw a line and we say ‘no more abortions after this point,’ someone’s going to fall on the other side of that line, and they’re going to be harmed.”

Murdering a human being shouldn’t be a politicized topic? And this woman is a doctor.

22 weeks. A baby born at 22 weeks can survive outside of the womb. There have been cases of babies born at 18 or 19 weeks who survived.

Horvath and her business partner Morgan Nuzzo got so happy seeing equipment from a closed Georgia clinic brought into the office building:

As they watch volunteers move the equipment into their office space, Horvath tears up and embraces her business partner, Morgan Nuzzo, a certified nurse-midwife.

“Whooh,” Horvath says with a sigh. “I was thinking about how Georgia lost access to abortion, like, this week. And we’re getting this equipment from them. So — it feels very heavy.”

“We’re going to take good care of the equipment,” adds Nuzzo. “We keep talking about it as ‘rehoming.’ “

The majority of abortions are elective. It has nothing to do with abuse. 1% in one poll I found. One-freaking-percent.

The health of the mother? 3%

If you want to help these women, you show them they don’t have to murder their children to have a wonderful life. States and cities across the nation have pregnancy centers, which the left tries to demonize since it conflicts with their abortion religion.

Instead of worshipping abortion, how about we embrace the culture of life? A simple Google search will give you the names of emergency pregnancy centers. As much as the left hates them, many non-religious ones include abortion information.

But most importantly, all of the emergency pregnancy centers provide help and support for women instead of directing them straight to abortion.

Personal story: A close friend of mine had gestational diabetes and pre-eclampsia. Her kidneys started to fail as her blood pressure hit deadly levels during the last two months. The doctor told her they had to take out the baby for her to survive.

They planned to induce her. But her water broke a few days before the appointment, and she had an emergency C-section due to labor complications.

But I guess none of that matters because she could have just gone to a clinic like this and killed her child. The thought never crossed her mind. In fact, she told the doctor she would only induce if he could guarantee her baby would be okay outside of the womb.

Doctor – You need to get her out of you.
My friend – I don’t care unless my baby will be okay.

However it will all be compromised to whatever stage it can be portrayed as cute in in a sonogram because that’s where the votes are.

Preserving society’s inclination to take care of cute things is a good thing.

How about abortions in the fourth trimester? No problem with that, is there?

Once the baby arrives, society takes an interest owing to cuteness. Historically it’s not cute before it’s born.

But, since you mentioned it — it’s not a baby until it’s born, so you support abortion up to birth? Or after?

To prospective parents, it’s a baby and has a soul if they’re making plans for it, nursery setup and assortment of baseball toys. The soul signifies a relation to others. Compare, “He has no soul,” no relations of the right sort to others. As a word is always serves that function.

Cuteness sort of forces a relation to others to happen, which is were agreement would come from.

You typed a lot of words, but I don’t believe that you answered my questions.

Do you support abortion up to birth, and/or beyond?

Do you believe that life begins at conception?

If the baby is born and it’s as ugly as a mud fence, therefore has no redeeming “cuteness,” is it acceptable to kill it?

It’s not about what he supports or doesn’t support. He’s delivering a competently cynical view of how the rest of American society will make this decision, if they can ever manage. Baby tigers, cute; baby milk-snakes, shoot ’em!

At least while they’re unborn there’s none of those problems.

You obviously don’t have any children. It’s not just the cute baby, but try having a conversation with a 3-6 year old. If you do it right you will see what we are talking about.

No big thumbs, that’s a down vote

I’d say around 16 weeks is right, an agreement already achieved in Europe. You want agreement so you can move on to some other crisis.

At conception you get a fetus, a human being in embryo, but not a human.

At birth you get a baby.

The language in the middle depends on context, but the language knows what it’s talking about. That’s where agreement shows up long before votes are taken on abortion. It’s just a question of following the language to get agreement.

A sociologist point of view of the matter.

I was going to ask a few more questions, however, to further discussion I find more value in direct answers to inquiries rather than a semantic dance around the subject.

Perhaps that’s my failing. Thank you; no.

Women who lose their baby’s in a miscarriage, say 5 weeks

Always say they lost their BABY

It’s a Human BABY you turd!

I’m of the impression that given that it’s never possible to prevent Gomorrah entirely, it’s a very good thing for it to self-identify and localize before The Salt Hits The Fan.

“Every time we draw a line and we say ‘no more abortions after this point,’ someone’s going to fall on the other side of that line, and they’re going to be harmed”?

Great. So if we say abortion is legal until the subject proves they don’t vote Democrat you’ll support it?

Somehow I think the Left would scream at the notion they might be subjected to the same treatment they’re demanding as their right to do to kids.

“Every time we draw a line and we say ‘no more abortions after this point,’ someone’s going to fall on the other side of that line, and they’re going to be harmed”?

Of course, They’ve proven with our guns that that’s a winning strategy for them.

‘Every time we draw a line and say ‘abortion up to this point’ more babies fall on the other side of the line and get killed.

These gargoyles talk about “Human Rights?”

Did anyone tell them that babies in the womb are HUMAN? HUH? Talking about human rights as they slaughter HUMAN babies? And not quickly, but slowly with inhumane torture.

They are ALL Kermit Gosnells !

Kermit’s going to want a retrial

Six weeks to baby meets granny in state, if not in process. Human rites performed for social, redistributive, clinical, political, and fair weather causes. Reproductive rights in order to keep women affordable, available, and taxable, and carbon-based”burdens” of evidence sequestered in darkness. That said, four choices, and an equal right to self-defense through reconciliation. The wicked solution is neither a good nor exclusive choice.

On the criteria of ability to survive of itself, everything up to 26 yrs, or discharge of all college loans is but a proto-human, expendable if any adult human female finds it an inconvenience.

Equal rights for men! I demand the right to be able to murder someone!

Murder (i.e. homicide in darkness, when you can get away with it), yes. Abortion as in terminate a process, as in evolution, as in human life. Specifically, elective abortion of real and perceived “burdens” h/t Obama for social (e.g. sequestration of carbon-based evidence), redistributive (e.g. AntiJew privilege), clinical (e.g. planned parenthood/cannibalism), political (e.g. Democrat “heroes”), and fair weather (e.g. climate stasis) causes. Witches, warlocks, and babies in the forward-looking backward modern model of olde.

Baltimore should be so blessed. May they name their murder clinics after Marilyn Mosby and call them Mosbytoriums.

“All-trimester abortion care “is a really politicized topic,” Horvath says, “and it shouldn’t be. Every time we draw a line and we say ‘no more abortions after this point,’ someone’s going to fall on the other side of that line, and they’re going to be harmed.”

The mothers are going to be harmed?

Let’s say that the line is drawn at birth.

“Someone’s going to fall on the other side of that line, and they’re going to be harmed.”

It’s not going to be the “mother.”

“Reproductive rights” are the rights to HAVE babies.

That said, acknowledging the dignity and agency of women, and men, there are four reproductive choices: sex or abstinence, prevention of conception in depth, adoption (i.e. shared/shifted responsibility), and compassion (i.e. shared/personal responsibility), and an equal right to self-defense through reconciliation. The wicked solution to a purportedly hard problem: keep women affordable available and taxable, and the “burdens” of evidence sequestered in darkness, is neither a good nor exclusive choice.

Perhaps the better framing would be to demand reproductive responsibilities v rights. Of course the d/prog don’t like the concept of individual responsibility or consequences. They don’t actually mean rights in this context either, what they demand is the ability to invoke an unquestioned privilege of their existence.

“Perhaps the better framing would be to demand reproductive responsibilities v rights.”

“Reproductive responsibilities” is exactly right — creating then killing whatever it is, when you didn’t have to seems at least untidy, perhaps worse. Be responsible. Don’t make a mess.

I’m a doc. An obstetrician friend and med school classmate of my said this simply: she’s never encountered a reason for a third-trimester abortion. She’s been in practice 35 years (as long as me) and not once has encountered a clinical situation where an abortion was required between 24 and 40 weeks. If there is a situation that threatens the mother, you just do a C-section and deliver the baby. Problem solved.

There’s no medical reason for a third trimester abortion. None.

“At least we continue to have options available so that the least of society can be prevented from procreation. Blacks, Hispanics, underclass, underprivileged, poor whites, dregs of society who are moochers, low IQ, and more can get women’s reproductive health care without interference. Up until the day of birth, no abortion is a late term abortion.”

How many condoms can you buy for the cost of an abortion?

If anybody’s having that much sex … I salute you.