The strike happened on Ukraine’s Independence Day from the Soviet Union. 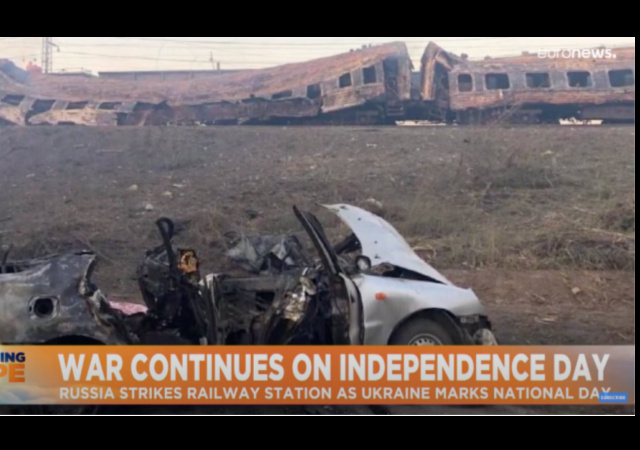 A Russian rocket struck a Ukrainian railway station on Tuesday, the 31st anniversary of Ukraine’s independence from the Soviet Union.

The attack hit a station in Chaplyne in the Dnipropetrovsk region. It borders Donetsk, which has been a separatist area since 2014.

Russia claimed the strike killed hundreds of Ukrainian strikes even though the country keeps insisting it doesn’t target civilian infrastructure.

Five of the victims of the attack in the eastern town of Chaplyne burnt to death in a vehicle, officials said. Two boys aged six and 11 were also killed.

“As a result of a direct hit by an Iskander missile on a military train at the Chaplyne railway station in the Dnipropetrovsk region, more than 200 servicemen of the reserve of Ukraine’s Armed Forces and 10 units of military equipment were destroyed, on their way to combat zones in the Donbas,” its defence ministry said in a statement.

Ukraine has made no mention of military deaths in the strike.

The Ukrainian government asked citizens to have quiet and small Independence Day celebrations because “Russia might do something ‘cruel’ to disrupt the celebrations.”

It’s 1939. This is the period of phony war. It’s happening but we don’t see it. But, the Entire Globe is on the precapice and on the verge of going Bat Shit Crazy.

The PM of Belgium announced in Parliament that it was going to be a Long, Cold, Hungry Winter. And, it was not just 1 winter. He was announcing that it would be at least 5 and maybe 10. Europe is slipping into an Energy Induced Depression. And, hunger is stalking to planet.

The Hurricane is coming.

We should take the illegals posing as children in the El Paso section and send them to Ukaine and let them pose there.

Apparently Ukraine has switched to a domestic narrative.

“Russia claimed the strike killed hundreds of Ukrainian strikes even though the country keeps insisting it doesn’t target civilian infrastructure.”

That is their main target, actually.

“Russia claimed the strike killed hundreds of Ukrainian strikes even though the country keeps insisting it doesn’t target civilian infrastructure.”

I don’t understand this sentence.

Defense Politics Asia is a much more reliable source than the BBC on this war.