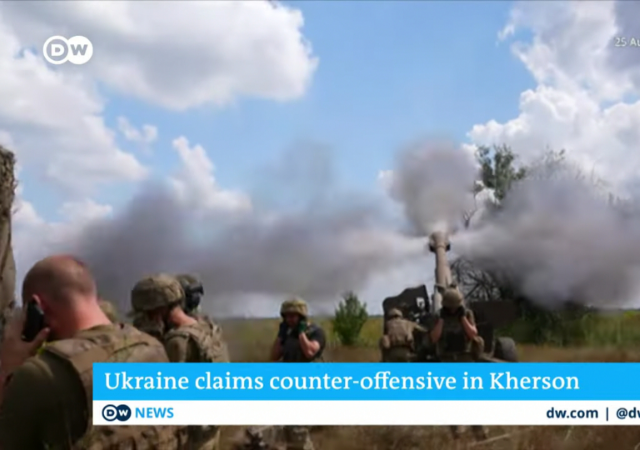 After months of anticipation, the Ukrainian military started its first large-scale counter-offensive against the Russian forces. The Ukrainian objective is to push the “Russian troops back across the Dnipro river and retaking the occupied city of Kherson,” the French broadcaster Euro News reported Monday.

News reports suggest that these precision hits were aimed at disrupting Russian supply lines ahead of the big push. The missile “attacks have forced the Russians to spend time and resources defending their rear bases, slowing their ability to move supplies towards the front,” the British newspaper Financial Times noted Sunday, just days ahead of the Ukrainian counter-offensive.

The Armed Forces of Ukraine have breached the occupiers' first line of defence near Kherson. They believe that Ukraine has a real chance to get back its occupied territories, especially considering the very successful use of Western weapons by the Ukrainian army.

Kherson province, at the center of the current Ukrainian counter-offensive, is nestled between the Black Sea and the Azov Sea, giving Russia the strategic depth it needs to defend the Crimean Peninsula, which it annexed from Ukraine in 2014.

The Russian-occupied province, named after its capital city Kherson, makes up “land-bridges” to Crimea, which Russia needs for its Black Sea naval base.

#Ukraine some shelling are reported in Kherson again. Right now we are talking about a possible counter offensive by Ukrainian army pic.twitter.com/DM6hZXd4Fa

The Ukrainian military on Monday started a long-awaited counter-offensive against Russian forces in the country’s south, its southern command said on Monday.

Command spokesperson Natalia Humeniuk confirmed the offensive in a news briefing and said it included the Kherson region.

Ukraine has regularly stated its intention to retake its south, and in particular the city of Kherson, the only regional capital that Russia has been able to capture from Ukraine since it invaded six months ago.

The Ukrainian military claimed early breakthroughs in its attack on fortified Russian positions. “Ukraine’s military claims to have broken through Russia’s first line of defence in the occupied Kherson region,” the BBC reported.

However, Russian sources claimed that the first wave of Ukrainian attack was repelled, inflicting heavy losses on the enemy forces. “Responding to the Ukrainian claims, Russia’s defence ministry said that Ukrainian troops had attempted an offensive in the Kherson and neighbouring Mykolaiv regions,” the broadcaster added.

Ukraine has launched a major counter-offensive in the south. Reports of mass evacuation of Nikolaev and Novaya Kahovka which is being shelled by 🇺🇦. Beirslav car factory was hit by missiles (video). pic.twitter.com/AGIt6jEpmk

While Russia wages war on Europe’s frontier, it is stepping up military cooperation with China to secure its eastern flank. In early September, Russia and China will hold war games in the Russian far east and the sea of Japan. Both China and Russia have maritime disputes with Japan.

India, which took a favorable stance concerning the Russian invasion of Ukraine, will also send troops and equipment to participate in the exercises.

Russia said Monday it will launch sweeping military drills in the country’s east that will involve forces from China — a show of increasingly close defense ties between Moscow and Beijing amid tensions with the West over the Kremlin’s action in Ukraine.

The Russian Defense Ministry said that the Vostok 2022 (East 2022) exercise will be held Sept. 1-7 in various locations in Russia’s Far East and the Sea of Japan and involve more than 50,000 troops, over 5,000 weapons units, including 140 aircraft and 60 warships.

The ministry released a video of Chinese troops arriving in Russa in preparation for the exercise.

The ministry said that units of Russian Airborne troops, long-range bombers and military cargo planes will take part in the drills along with other forces.

The ministry said the Vostok 2022 exercise will be held from 1-7 September in various locations in Russia’s far east and the Sea of Japan and involve more than 50,000 troops and some 5,000 weapons units.

The drills will be conducted at seven firing ranges in far eastern Russia and will engage troops from several nations – China, India, Laos, Mongolia, Nicaragua and Syria.

If Ukraine actually succeeds in pushing Russia back, it just accelerates the complete end of Russian energy exports to Western Europe.

Germany, as we know it, cannot survive without Russian energy.

This is at best highly unlikely.

Personally I don’t believe that this is going to happen to any militarily significant degree and is all propaganda- but for sake of discussion, lets say they do push them back.

At best it will be a net loss for the Ukraine because they don’t have the numbers, firepower, infrastructure and logistics to press any advantage even if they were to get one.

Read the article- Russia is also (in parallel) running EXERCISES ( they have resources to spare). That’s not an indicator of losing.

It wouldn’t surprise me if Russia does a deliberate tactical retreat to suck the Ukraine in beyond the supply ability then pinches them.

“It wouldn’t surprise me if Russia does a deliberate tactical retreat to suck the Ukraine in beyond the supply ability then pinches them.”

That has been Russia’s tactic in the north. Once the Ukrainians are out of their trenches and advancing across open ground they are vulnerable to artillery strikes. At least in the north the terrain is more wooded and hilly. In the south, it’s mostly open fields.

I have seen a lot of claims and counter-claims since this war started, all contradictory.

I have to assume it’s all propaganda and await the few nuggets of truth to be shaken out.

Yea, no war in history has occurred sans propaganda from both sides and everywhere in between. It’s always difficult when depending upon “news” organizations to know what is going on. And unfortunately, the “news” organizations just make it up, or push the made up BS of the state.

What we do know, the Russian population is almost 4 times that of Ukraine with a matching military. And the russians are mired down in a war of choice.

Could the ukrainians win? Not likely. But this is no cakewalk for the Russian conscripted army. They are sustaining very heavy losses, that is clear.

Only the biden junta could rescue the russians by stopping oil and gas production in the USA, thus raising the prices world wide. Without that high increase in energy prices the russians would be in very deep trouble.

We know that obama was just waiting for the election to be over to work with putin. We know that biden has given putin a gift of high energy prices.
Who is on putins side?

I often wonder if anyone can even think beyond the confines of one side or the other to understand the truth.

Who is the enemy of whom?

Russia is fighting in Ukraine with the professional, volunteer part of its army—about 150,000 men. Ukraine’s (conscripted) army is about four times that size. Russia does have the assistance of about 40,000 Ukrainians from the separatist regions. Some of the Ukrainian “separatist” soldiers may have been conscripted, I believe.

“professional, volunteer part of its army”

I guess you might say that if you knew pretty much nothing about the war that you didn’t hear from talking heads on television. Even the MSM sources admit that Russia has almost never used conscripts in the war. There was a minor controversy IN RUSSIA when it was reported that a few hundred conscripts had participated in the war.

Meanwhile there are innumerable stories about how Russia is offering large bonuses to conscripts presently in the army to volunteer to go. Why would they be doing that?

Here’s one example from our own propaganda news: https://www.rferl.org/a/russia-ukraine-war-illegally-detained-conscripts-pressure/31926058.html

And a story about the use of a few hundred conscripts for a short time in Ukraine and the fallout:

There is not one thing you can read and depend on as truthful. Nothing. No truth ever comes out of the russians, they are the masters of propaganda.

400K conscripts are inducted each year into the russian army. We know that many have been sent to ukraine but we have no idea what the makeup is. Stating what you did is pure fantasy or a lie. You certainly don’t know the truth.

The russian army is conscripted, that is a fact, 400K or so per year, Those that stay after their year were still brought in as conscripts. Thus they are an army of conscripts, but the precise makeup is unknown.

So, in other words, Barry, you admit there is no defense for your claim that Russia is fielding a “conscript army.”

Again, Russia has 1M or so active duty military, but only a tiny fraction of them (about 15%) are fighting in Ukraine. All the available evidence says they are volunteers. Believe what you want, though, I guess.

Ukraine doesn’t have the resources for a large scale breakthrough. All propaganda

Defense Politics Asia and History Legends have both been doing a great job covering the conflict without heavy biases.

From the channels I’m hearing, this has been largely a failure.
If there were any successes, Elensky would let us know.

Let me put it another way. The puts’s putsch is pfft. or Elensky is a two pump chump.

Look for all the new Asiatic faces on the Ukrainian front.

Why? Did North Koreans come to help Russia?

A few months ago, Zelensky Regime was promising a million-man army would sweep away the Russians by the end of August.

Now, a few pinprick counter-attacks in the south is a victory?

I, myself, believe that requiring the Russian regime to renounce all claims to Kaliningrad, and Transnsitria inlcuding forced ethnic out-migration is bit extreme requirement for ending the active hostilities. Ethnic cleansing is never a good look.

Publicly renouncing claims to Crimea once the Ukranians have retaken it, plus a Russian-territory DMZ East of the prior border should be enough.

?In what way is blowing people up a good way to get more of what they’ve got from them, unless blowing them up is the point? How does that get fun?

Start an offensive push into Russia as winter approaches? What could go wrong?

India participating with China in Russian-led military exercises is perplexing, given the bad blood between it and China and the numerous border skirmishes that they’ve fought, over decades.

shouldn’t, gives them a perfect opportunity to observe up close

Where is Ukraine getting all these troops to maneuver this “counterattack?” Reminds me of a classic comedy script:. “Where are you getting all these left handed pitchers? The same place you’re getting all those left-handed batters!” This entire fake War of the Potato-Faced Slavs is a comedy gag…to price oil in Rubles!

This “counter-offensive” is 99% fiction, produced for the consumption of western media.

Wish it were true, but reality begs to differ.