He took over when the US killed Osama bin Laden. 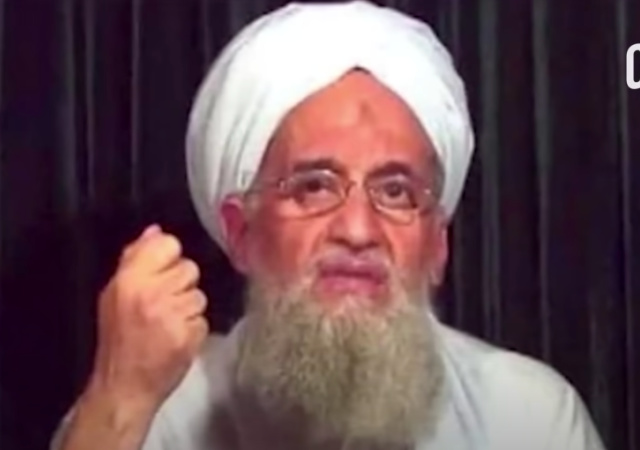 President Joe Biden will speak to the nation at 7:30 PM ET about the US taking out Ayman al-Zawahri.

Al-Zawahri became the leader of al-Qaeda after the killing of Osama bin Laden.

An official told Fox News: “Over the weekend, the United States conducted a counterterrorism operation against a significant Al Qaeda target in Afghanistan. The operation was successful and there were no civilian casualties.”

The Taliban are ticked:

In a statement, Taliban spokesman Zabihullah Mujahid confirmed that a strike took place and strongly condemned it, calling it a violation of ‘international principles.’

Ayman al-Zawahiri, who was Osama bin Laden’s second-in-command, was on the FBI’s most-wanted terrorist list. There was a $25 million reward for information leading directly to him.

Trying to make Biden and the military look tuff

After the withdrawal debacle, good luck with that

This is in the same category as repairing the border wall. You can expect more of this type of thing.

Color me skeptical at this point. The same agency droned an aid worker and his family last year and lied about it.

Seriously. Why would we believe them? They lie about everything.

Biden is getting 2 cups of pudding tonight.

Yeah, news sub humans will tout how “Biden did this and Biden did that”. We ALL know that dementia FJB only fills his diaper and asks for more pudding. Valerie Jarrett ran the country for eight years for the feckless and lazy
Obozo. Who took her place?

Well, here’s what he really did,

Next is the Taliban, in the much awaited, expected sequel to Obama’s 50 shades of Iraq War 2.0, World War Springs, etc. The billions of dollars in state of the art military housewarming gifts were just a down payment.

If Xi is a REAL man, he will take care of her today.

Pelosis are a high value asset for the CCP. Not gonna happen.

Wasn’t Biden a skeptic of the bin Laden raid?

Looking forward to all the “austere religious leader” obits about to hit the airwaves…or does that kinda thing only happen under Presidents Democrats hate??

He was a holy man, tending to the spiritual needs of his flock. What — are you going to say bad things about them, bigot? Such an islamophobe.

He was eliminated? Do you mean shot, like with a….gun?

I understand all of the above and agree with a lot of it, but for crying out loud, this may be the only thing this Administration has done that I can agree with, because it demonstrates once again to our enemies in the terrorist community that if you attack us, there’s no place to hide. Sooner or later we’ll get you – no matter who’s in charge.

Obviously, Biden and American oligarchs are playing with a double-edged scalpel, and should be sanctioned by the transnational community.

So we are back to Al-Qaeda operating out of Taliban-ruled Afghanistan and under their protection. It’s 2001 again but now with $80B of US arms and equipment. 20 years of American blood and treasure squandered thanks to Biden’s “leadership”.

Regime liars try to make Prez Dullard look tough, but the real lesson being underscored is his ignominious retreat from Afghanistan has made it a terrorist center again. Way to go, Brandon’s Democrat Party puppet masters!