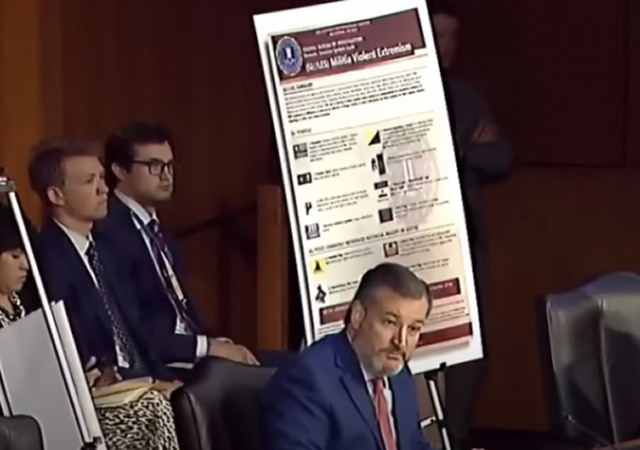 Senator Ted Cruz had a chance to question FBI Director Christopher Wray on Thursday and asked him why the bureau is classifying some classic symbols of American patriotism as indicators of militias and violent extremism.

Millions of Americans already view the FBI with an air of suspicion. The fact that they have designated these symbols in this way will only make matters worse.

In Thursday’s Senate Judiciary Committee hearing with FBI Director Christopher Wray, Texas Republican Senator Ted Cruz took Wray to task for the Biden administration’s politicization of the Bureau that’s been turned into a weapon against conservatives while ignoring leftist violence — and Cruz pulled out all the stops.

To illustrate his concerns, Cruz brought up a “Domestic Terrorism Symbols Guide” produced by the FBI and exposed by Project Veritas that included the Gadsden flag, Betsy Ross flag, and Gonzales Battle flag as being indicators of “militia violent extremism.”

“Now, that’s fairly remarkable that the Betsy Ross flag, in the FBI’s indication, is indicative of militia violent extremism because among other people who’ve been publicly alongside the Betsy Ross flag we have President Barack Obama — who was sworn in directly underneath two Betsy Ross flags,” Cruz pointed out alongside charts showing the Obama inauguration…

Cruz really shines in moments like this one. The video below is nine minutes long, and you should watch the whole thing.

Cruz hits Wray over the fact that the FBI ignores Antifa and BLM while going after parents at school board meetings. It’s a powerful exchange.

When it comes to disdain for the Gadsden Flag, check out this tweet from journalist Lesley Abravanel:

Florida’s vile new ‘Don’t Tread On Me’ license plate stirs controversy. DeSantis has claimed on Twitter that the plate is intended to send a clear message to out-of-state cars, likely refers to tourists from blue states like New York and California https://t.co/VpILlMbVD5

Apparently, no one told her about Virginia.

That’s wild considering how many FBI bureaucrats live in Virginia which had had a Gadsden plate for ages. https://t.co/cyX13eOjFy

Uh oh. Wait until hear about the plates we've had in Virginia for about a decade now. pic.twitter.com/Hsj1mrtvPN

I love the Tennessee one https://t.co/s51R6PIxut

God forbid anyone show a little pride for symbols associated with America’s founding.

IMO, the problem stems from adoption of these symbols by some admittedly extremist groups. Perhaps ‘appropriation’ is the better term since the leftists seem to use that word a good bit. Some guy displays one or more symbols then commits some horrible crime or makes an outlandish statement. Suddenly the leftists want to view those acts as somehow tainting the symbols or his associations in an irredeemable manner.

That’s simply not reasonable. Moreover this is a one sided application of their methodology. The guy who shot Steve Scalise had all sorts of associations with the far left. Did his actions not irredeemably taint those associations? Why not? Either some weirdo by their actions causes an irredeemable taint and guilt by association for those people and symbols displayed or it doesn’t.

Flying the standard American flag with its 57…er…50 stars is controversial. Studies have shown the flag emotes patriotism and the Left hates t hat. How many HOA ban the flag as not being inclusive of foreigners and protected minorities? One can buy commie flags but not a Confederate one. The FBI is loyal only to The State…not the people.

“How many HOA ban the flag as not being inclusive of foreigners and protected minorities?”

None in Florida: Section 720.304(2) of the Florida Homeowners’ Association Act states that any homeowner may display one portable, removable United States flag or official flag of Florida in a “respectful” manner, and one portable, removable official flag that is not larger than 4 ½ feet by 6 feet, which represents the United States Army, Navy, Air Force, Marine Corps, or Coast Guard, or a POW-MIA flag regardless of any covenants, restrictions, bylaws, rules or requirements of the association.

That is Free Florida and hardly the norm across the nation. Thanking God every day that I live here and that DeSantis is my governor.

I had a Gadsden Flag sticker on the rear glass of my truck can, until it was smashed out. Now, that was 25 years ago, so I don’t know if it was triggering back then. Debating on getting this tag; I’d have to give up my “Florida salutes Veterans” tag if I did.

I thought of a Gadsden Flag (Tennessee) tag for my “Sunday car”, but, as I drive it to other states, I didn’t want the car vandalized, or to leave myself open for trouble from cops in places like California.

The FBI is no longer trust worthy.

They were NEVER trustworthy. Their reputation was 100% thanks to Hollywood slavishly portraying them as ultrasleuth geniuses, not because of anything they actually did.

Just look at what they did to Richard Jewell all the way back in the 90’s. That was 30 years ago and they were already horrific, and haven’t gotten any better.

This! Absolutely this! It’s just become more blatantly obvious in recent years that they can not be trusted. There’s no excuse for treating everyone who makes use of traditionally patriotic symbols of this nation as potential terrorists, none! It’s long past time we as a nation stop accepting the excuse of the demented few and their actions being used as the benchmark on how to treat the rest of us!

Yet more reasons to defund the FBI.

First, defund it. Then, shut it down.

Wray doesn’t care because he’s backed by the crooked politicians willingly or unwillingly. The FBI was given 100 million by Congress and he knows he’ll get more if he wants it.

Wray is no different from any other director the Fibbies have ever had. He has the goods on every member of congress, all the cabinet members, and anyone else of consequence. One little threat and he brings them all to heel.

If “the goods” aren’t there. the FBI “crime lab” has the technology to cook things up out of thin air. They make the local LEO throw-down guns and dope bags look rank amateur.

He does not have the goods on them, the Democrats support him because he is their tool for destroying American conservatism, the question is will Republicans finally do something about it (i.e. slash FBI funding in a way that makes it clear to Der Wray he may not wage war against them) or will we keep up our obsession with supporting cops no matter what.

Saying he has the goods and nothing can be done is first a fantasy because even Hoover wasn’t as powerful as remembered, and second is a great reason to surrender which is the last thing we need.

I know it is hard but don’t give up just because we are losing.

Hope I’m being seen…
It is like Coach sending Michael Kors bags to Snooki.

Oh good. He ‘called them out’.

And he still praised Wray in the same session.

Enough with this BS from Republicans about all of the great public servants.

I am so sick about Republicans and the GOPe slavishly praising ‘all the good men and women’ at the FBI.

There are exactly TWO possibilities. Wray is either corrupt, or so incompetent that he allows the corruption to run rampant.

Either way he needs to go.

The organization is overrun and needs a massive housecleaning.

You can’t call out the FBI because the FBI is an organization not a person and the persons responsible remain safely protected behind the bureaucracy.

Yes you can. You can get a bullhorn and climb on the roof and call them out until you’re red in the face.

But the people who are responsible won’t care as long as you don’t mention their name.

Hey, Ted emailed me an eNewsletter yesterday that linked to a video of his questioning.
That’s exciting, right?

It reminds me of Trey Goudy tough-talking with no results. Same with Darryl Issa.

You can only wonder how stupid they think we are -= and we sure have been stupid.

The silver lining in this whole episode is that a Project Veritas exposé actually got some traction in Congress. I wish them many happy returns of the day in the next few years.

Been flying a Betsy Ross flag in front of the house for years. I remember once being lectured that one man’s terrorist is another man’s freedom fighter.

So, forgive me but GFY, FBI.

I have the Bonnie Blue myself. Once the flag of The Republic of West Florida.

The GOP is all talk, no action. They’re too corrupt as an organization to betray their handlers.

The moral, cultural and political rot at the FBI is manifestly deep. The house-cleaning that either President Trump or Governor DeSantis undertakes after he wins the White House in the 2024 presidential election should be equivalent in scope to that accomplished by Hercules’s mythological feat of diverting a river to clean the mountains of filth in the Augean stables.

But ok to have the hammer and sickle ?
Fk the Marxists, fly the flag, American, Gadsden or Bonney Blue if you want.

Yeah. The Dumb-o-crats approve of flying the hammer and sickle, sundry Muslim supremacist/terrorist iconography, sundry “black power”/”Black Lives Matter” standards, “Anti-fa” symbols, etc.; the icons of subversive and totalitarian ideologies, but, don’t you dare fly the American flag or any of its famous and justly-celebrated variations — that would make you an alleged “domestic extremist” and “white supremacist.”

Everyone not flying today’s version of the intersectional flag is a far-right terrorist.

I have thought of flying the 48-state flag at my house. That would mean I am a REAL danger to the safety of the State.

After all: in the days of 48 states we were a prosperous nation with the mindset of we could do anything we set our minds to do. Bell Labs, RCA Research, and other amazing places still existed, and employed Americans. We still made products for the average family’s needs, not just “defense”, while licensing our brand names to the Chinese.

The GOP will have a bit more leverage to make changes if they take control of both houses in the mid-terms. At this point, Ted’s goal is to get the message out to the voters.